If You Liked the DC League of Super-Pets, Don’t Miss These 4 Films! The DC League of Super-Pets is an exhilarating film filled with unforgettable friendships and numerous laughs. The film portrays Krypto the Superdog (fantastically played by Dwayne Johnson) and his best friend/owner, Superman (John Krasinski), who extinguish crime together in the city. Their hard work and undeniable chemistry has led to countless victories and unwavering support from citizens. However, their latest obstacle is one filled with immense danger and challenge, so much so that even Superman, as well as the entire DC League of superheroes, can’t find a way to defeat the villains (antagonist Lex Luthor and deranged guinea pig, Lulu). With all of the customary heroes being trapped in an unknown location, it is up to Krypto, and his rag-tag team of “super pets” from the pet store to find a way to rescue the DC league of superheroes, restore safety, and vanquish the villains. This thrilling film exhibits the importance of friendship, accepting those around us and the willingness to do anything for our family and friends. Featuring celebrated actors and actresses like Dwanye Johnson, Kevin Hart and Kate McKinnon, this vivacious film is a must watch! If you enjoyed this motion picture, here are 4 superb motion pictures with similar characteristics that you can’t pass up!

If you want to see a touching film about an extraordinary pet, watch Mia and the White Lion The film Mia and the White Lion depicts the heartwarming tale of the unbreakable bond between Mia (a 10-year-old girl who recently moved to South Africa) and Charlie (the white lion who resides at her family farm). Almost instantly, the unlikely pair form an intuitive bond, growing and learning about the world around them. Unfortunately, their untroubled life takes a tumultuous turn when Mia’s parents make the painful decision of moving Charlie due to concerns of the lion endangering their daughter. This predicament results in a compelling journey of self discovery and perseverance, in order for Mia to find a sanctuary for her cherished friend, Charlie. This incredible film advocates for a touching message of the connection between human nature and our environment, and is a staple if you enjoy uplifting narratives.

If you would like to see a hilarious film filled with joy and dedication, watch the star-studded family comedy Paddington 2 The action-packed film Paddington 2 is an animated comedy directed by Paul King and dedicated to author Michael Bond. This spectacular picture opens with the likable bear, Paddington (remarkably voiced by Ben Whishaw), who pleases everyone and spreads joy in his community. Paddington is on a hunt for the perfect 100th birthday present for his Aunt, Lucy, and is overcome with delight when he spots a superb pop-up book in an antique store. He plans on purchasing this book, but needs to gather enough money as the book is rather expensive. Unfortunately, one night, Paddington spots a mysterious thief that steals the treasured book, but vanishes into thin air seconds later. When officers arrive, the blame is cast on Paddington, thus, all the evidence points to him. Paddington knows that he is innocent, yet despite his countless pleas, he is sent to the nearby jail. Along with supportive friends and a dedicated mind, Paddington must figure out a way to prove his righteousness and restore peace. The prominent themes of friendship, family and determination, coupled with the intriguing, well developed plot, make Paddington 2 a key film in your next family movie night!

If you would like to see a notorious team of bad animals try to become model citizens, watch the uproarious film The Bad Guys 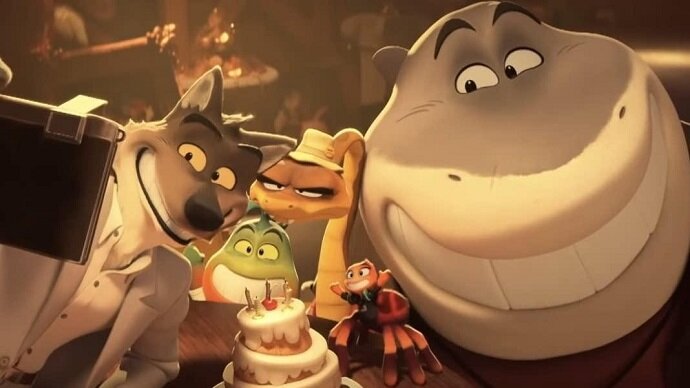 Released a few months ahead of DC League of Super-Pets, The Bad Guys is a uproarious film about a scandalous team of villains who specialize in robbing banks, stealing, and being the worst possible citizens in their city. Their gang consists of Mr. Wolf (Sam Rockwell), the optimistic leader of the pack; Mr. Snake (Marc Maron), the experienced safe cracker and Wolf’s closest friend; Mr. Piranha (Anthony Ramos), the small yet stalwart companion; Ms. Tarantula (Awkwafina), an exceptional hacker, plus, the only female in the group; And lastly, Mr. Shark (Craig Robertson), the sensitive, immature master of disguise. After countless successful heists, the Bad Guys are finally caught, this time, with no escape plan from prison. However, a generous hamster, Professor Marmalade (Richard Aoyade) proposes a plan that if the notorious team can magically turn “good”, after a lifetime of being bad, they will be allowed an exception from jail. Ensuing numerous ups and downs, the Bad Guys are faced with the ultimate challenge — the ability to be righteous and ethical. This fabulous film is certainly one that will astonish you, as well as intriguingly deliver enthusiasm, adventure and hope!

If you are craving for an impeccable feature film packed with adventure, aspiration and the theme of discovering your true self, The Queen's Corgi is for you! An extravagant film focusing on the recurring theme of discovering your true self, The Queen’s Corgi is a phenomenal motion picture inspired by Queen Elizabeth II and her deep love for corgis. The story depicts a corgi named Rex (voiced by Jack Whitehall), who has lived a luxurious life in the Queen’s palace for his entire life. That is, until he gets lost, loses his collar, and nearly drowns. With no definitive way to get back to the Queen, Rex feels extremely dejected and desperate— until a kind-hearted man takes him to the dog shelter. Eventually, Rex falls in love with the beautiful saluki dog, Wanda, whom he meets at the shelter, and they grow to form an unbreakable bond. With the help of Wanda and his new friends at the shelter, Rex embarks on a journey, leading him back to his familiar palace. However, when he arrives, he is forced to choose between living with the Queen and being her most beloved pet, or, to be able to stay with Wanda and his new friends. This riveting film uncovers the ultimate theme of discovering your true identity, showing the audience that sometimes we have to be willing to give up certain idealistic things, in exchange of love and friendship. You cannot miss The Queen’s Corgi if you enjoy an enthralling animated film!