Christmas with The Big Bad Fox and Other Tales Watching animated flicks during festive periods, is in itself, almost like a bonafide tradition. This genre always warrants a special place in any holiday watching list, and The Big Bad Fox and other Tales is one of those that is destined to bring some good chuckling cheer, as well as become a classic with its Christmas segment.

From the mind and artistry of Benjamin Renner, and based on his famous comic books, The Big Bad Fox and Other Tales collects three of his story arcs into one film. Originally meant as half-hour TV specials, they are now (lucky us!) packaged under a single narrative framework. Coming from his Oscar-nominated Best Animated Feature Ernest & Celestine, we can expect more of the same quality artwork and storytelling. 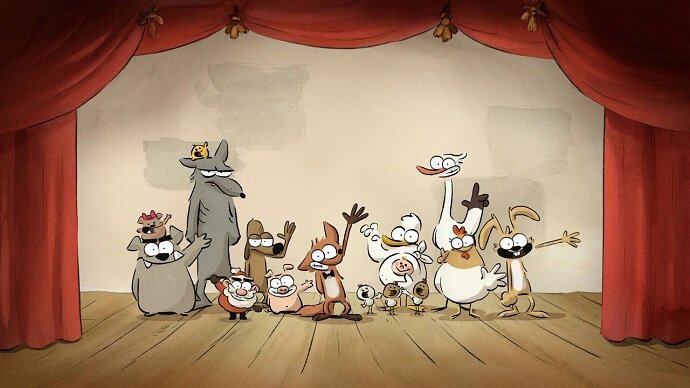 The cast of farm animals run the gamut. There’s the weak-willed fox (voiced by Guillaume Darnault) who’s an aspiring predator. Pig (Damien Witecka) is the voice of reason, who has his wits constantly challenged by his farm-mates Rabbit (Kamel Abdessadok) and Duck (Antoine Schoumsky). Throw in a feisty Chicken (Celine Ronte), a grim Wolf (Boris Rehlinger), and a very literally lazy Dog (Guillaume Bouchede), you’re all buckled in for a movie ride of your life.

The film begins with the viewer inside a barn. There’s a stage with the curtains drawn, and a very clear sense of disarray as the animals argue behind the screen. It’s clearly a makeshift theatre experience that you’re being placed at - the Honeysuckle Farm Theatre, we are told - and from the sounds of it, not everything is ready for show. This is how The Big Bad Fox and Other Tales (TBBFAOT) pretty much begins and ends - with plenty of chaos. But happily so, because from this madness is where we get our laughs, as the animals one by one stumbles into hilarious situations.

Even as it begins, you get title changes and talks of swapping babies with watermelon, as the host tries to get the show started. And when it does, the pace never lets up. The first skit, titled A Baby to Deliver, picks up on the legend of babies being delivered by storks. So what happens when a stork hurts his wing and needs help to deliver a baby named Pauline, to her rightful parents? Pig, Rabbit and Duck are our (un)lucky group to be saviours.

While Pig is all level-minded reason, Rabbit and Duck is all instincts-first, and the three inadvertently gets caught up in an unexpected road trip. And because this is Renner’s world of wackiness, it’s definitely not a boring road trip. Expect repeated incidents of misadventures caused by the well-meaning but foolish Rabbit and Duck, and a high-strung Pig trying to save them all but ultimately always sacrificing for the group. And with this zany group, sometimes even their mistakes turn into blessings in disguise, as a certain driving segment floors both tension and laughs.

They even end up meeting a Mandarin-speaking friend, who unwittingly lands them with the solution they have been looking for. But will the plan hold? 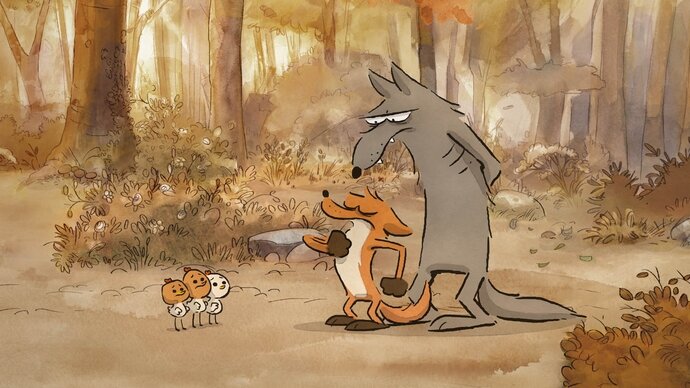 The next portion is The Big Bad Fox, and our host now becomes the lead to his own segment. Having always wanted to do justice to his kind by terrorising the farm, the poor kind soul actually can’t get over his own wimpy nature. Even the Chicken can kick his ass!

But with his friend the Wolf, he manages to concoct a scheme that involves stealing three eggs and rearing the hatched chicks into chickens, before eating them and finally becoming the true hunter he is meant to be. Sadly for Fox, what you’ll see is more rib-tickling scenes as he struggles to gain his footing as a legit predator. This chapter totally dives into the fish-out-of-water situations and makes for some unthinkable results! This segment of TBBFAOT is prime entertainment. 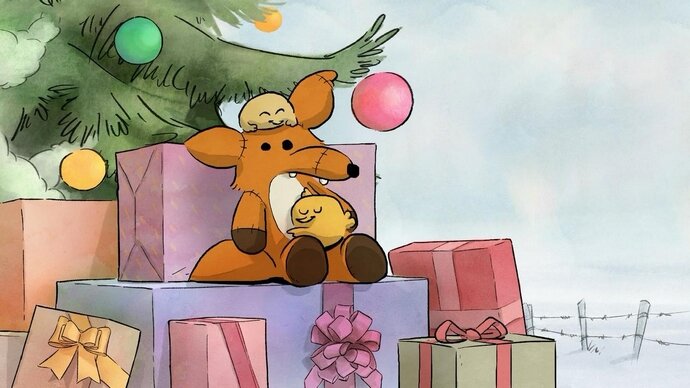 And ripe for the season, the last play is titled We Must Save Christmas. When you think of Christmas, many icons come to mind. Turns out, in usual Rabbit and Duck fashion, the duo accidentally destroys a very significant part of Christmas through their antics. Horrified by their act, they begin realising the consequences of their actions and proceed to devise a plan and take it upon themselves to save Christmas and its celebrations.

The rich artistry of the film, rendered in beautiful watercolour and line art means this watching will be a visually satisfying journey. Children will love the cute animals and their dramatic ways, while the grown-ups can enjoy the snappy side looks and humour. Embark on some zany and amusing antics with TBBFAOT and have a truly merry time this year-end!