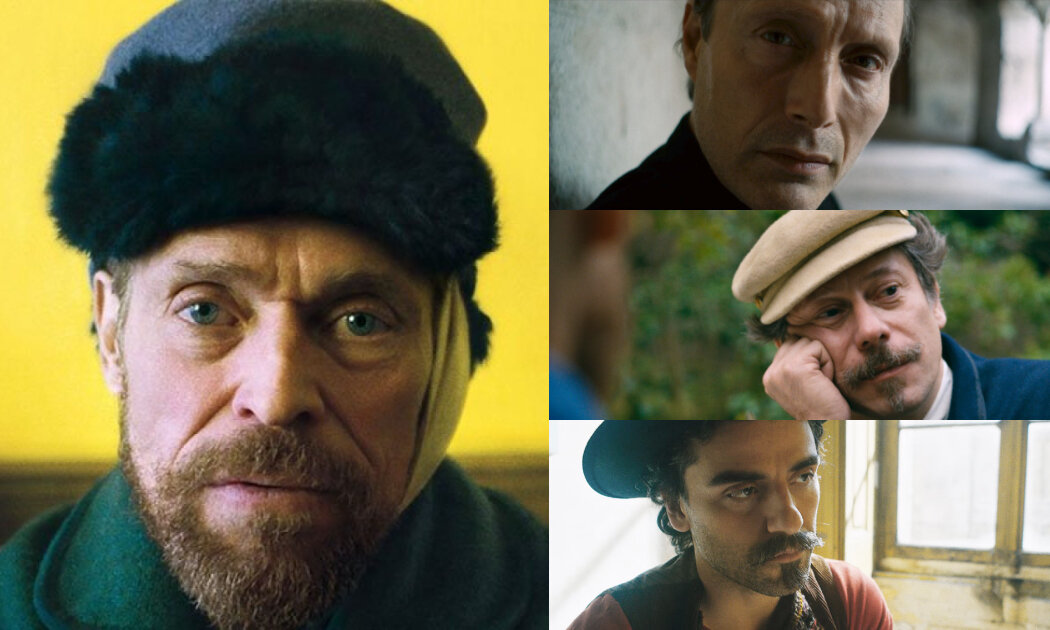 Most of us are familiar with Vincent van Gogh’s impressionism works, but few knew about his life. The 2018 movie At Eternity's Gate explored the painter’s life, especially the period where he lived in Aries and Auvers-sur-Oise, France.

The movie was refreshing, intriguing and thanks to its stellar cast, immensely engaging. Dafoe is not the only actor playing a real person, he is joined by peers who portray people around van Gogh. Let’s take a look at who plays who in At Eternity’s Gate. 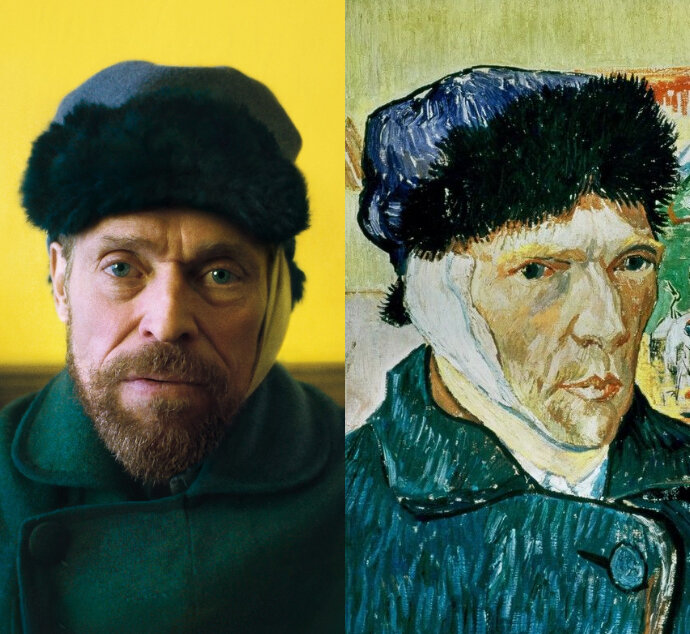 As mentioned earlier, Dafoe is van Gogh and he was mesmerising as the tortured artist. Dafoe started off in films back in the 1980 Heaven’s Gate, and was fired in mid-production. Thankfully, that little blip did not hurt his career. Thereafter, he worked steadily throughout the years. Dafoe earned his first Academy nomination for Oliver Stone’s Platoon in 1986, which propelled him to the mainstream.

He has appeared in a series of blockbuster films, such as Born on the Fourth of July (1989), The English Patient (1996), The Aviator (2004) and more. Over his 4-decade career, he has made over 100 films and been nominated for 4 Oscars. He will next appear in the highly anticipated Zack Snyder’s Justice League. Theo van Gogh was the younger brother of Vincent, and an art dealer. He was unfailing in his support, both emotionally and financially, for his brother, allowing the older van Gogh to devote his life to painting.

In At Eternity’s Gate, he was played by Rupert Friend, best known for his role as CIA operative Peter Quinn in the series Homeland, which stars Claire Danes. Friend started his career in films in the 2004 Libertine, opposite Johnny Depp, where he was nominated for the British Independent Film Award for Most Promising Newcomer. That quickly got him noticed, and he was cast in a series of movies, such as Pride and Prejudice (2005), Outlaw (2007) and The Young Victoria (2009). He dabbled in TV while keeping a toe in movies, appearing in Homeland for six years. Since At Eternity’s Gate, Friend has been busy, he will next appear in Last Looks, an action thriller that also stars Mel Gibson and Charlie Hunnam. French Post-Impressionist artist Paul Gauguin is now recognised for his experimental use of colour and Synthetist style that is different from impressionism. During his life, his art was not appreciated. It was only after his death that his works were widely recognised, thanks for art dealer Ambroise Vollard, who organised exhibitions of his work. His work has influenced famed artists such as Pablo Picasso and Henri Matisse. Gauguin was good friends with Vincent and Theo van Gogh.

Gauguin was played by Oscar Isaac in the movie. Isaac shot to fame with his portrayal of the title character in Inside Llewyn Davis in 2013, which earned him a Golden Globe nomination. He quickly followed up with works such as A Most Violent Year (2014) and Ex Machina (2014). Now he may be best known as Poe Dameron, the X-Wing pilot, in the Star Wars sequel trilogy. In 2016, Isaac was named one of the 100 most influential people in the world on the annual Time 100 list. Next up on the list for him is the eagerly anticipated Dune. In the near future, he will take on the role of Solid Snake in Metal Gear Solid, a movie adaptation of the popular video game. Johanna van Gogh was a key player in the growth of Vincent’s fame, and she was the wife of Theo, and a Dutch editor and translator. After the van Gogh brothers’ death, she tirelessly edited the brothers’ correspondence and produced the first volume of their letters in Dutch in 1914. She also donated van Gogh’s works to exhibitions around the world, spreading his artistic brilliance globally.

In At Eternity’s Gate, she was played by British-born French actress Amira Casar, whose works before this are mainly in European cinema. She is also active in stage plays, mainly in France. Casar also appeared in the critically acclaimed Call Me By Your Name in 2017, playing the mother of Timothée Chalamet's character. 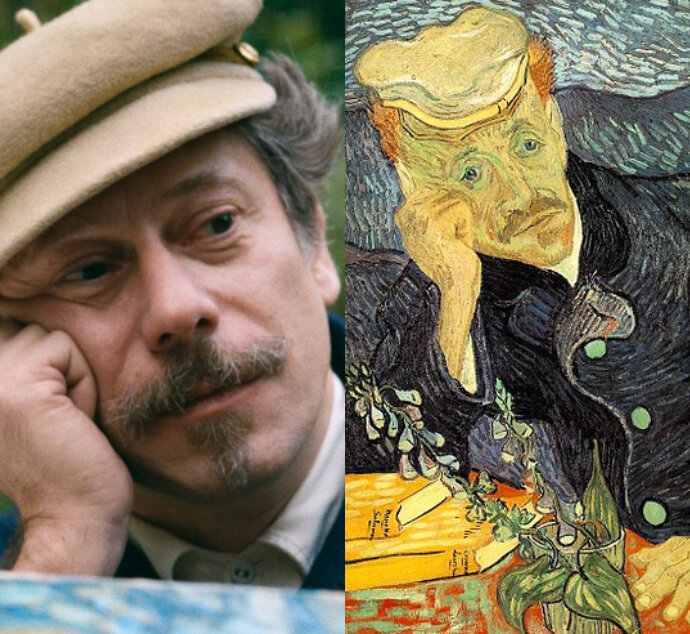 French physician Paul Gachet was best known for treating van Gogh during the painter’s last weeks. He was an ardent supporter of artists and was an amateur painter himself.

French actor Mathieu Amalric took on the role of Gachet in At Eternity’s Gate. He is mainly active in Europe, and is probably best known for playing the lead villain in the Bond movie Quantum of Solace. He also appeared in Steven Spielberg’s Munich, as well as the lead role in The Diving Bell and the Butterfly, for which he earned critical acclaim. Amalric has won a handful of awards, such as the Cesar Award and Lumieres Award. 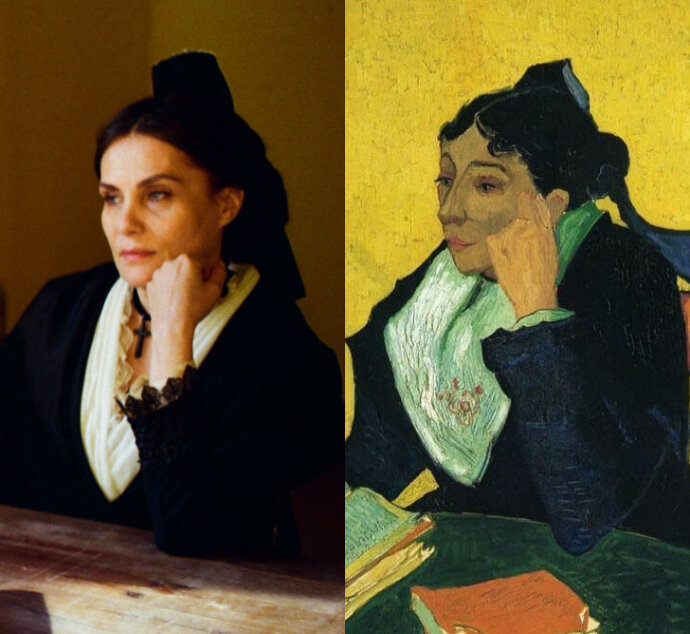 A former model, French actress Emmanuelle Seigner plays the role of Madame Ginoux, the subject of one of van Gogh’s paintings, known as the Portrait of Madame Ginoux or L'Arlésienne. Van Gogh painted a group of six paintings of Ginoux, each slightly different. Ginoux ran the Cafe de la Gare with her husband Joseph-Michel, where Vincent stayed for five months in 1888. He became friendly with the couple and asked Madame Ginoux to post for a portrait for him and Gauguin. Vincent produced a full-scale painting of her in just one hour.

Seigner also appeared in the The Diving Bell and the Butterfly, alongside her At Eternity Gate’s costar Amalric. She married Roman Polanski in 1989 and the couple shared two children. She met Polanski when she acted in his movie Frantic in 1988, and since then, appeared in five more movies under his direction, including The Ninth Gate (1999) and An Officer and a Spy (2019).

Mads Mikkelsen as The Priest

Although his role is fictional, Mads Mikkelsen’s Priest plays a pivotal role in At Eternity’s Gate. As the priest in the mental asylum in Saint-Remy-de-Provence, he was sympathetic to Vincent, and engaged with him in talks about art and the nature of God.

Mikkelsen had no source material to fall back on, relying on his own instinct and imagination to bring the Priest to life. Danish actor Mikkelsen was originally a gymnast and a dancer, but switched gears to act, rising to fame in his native Denmark for his roles in the first two films of the Pusher film trilogy. It was his appearance in the Bond movie, Casino Royale that he achieved worldwide recognition. He won Best Actor at the Cannes Film Festival for his performance as Lucas in the Danish movie The Hunt (2012).

Mikkelsen also appeared in TV, playing Hannibal Lecter in Hannibal. Audiences may also recognise him as the villain Kaecilius in Doctor Strange, and Galen Erso in Rogue One: A Star Wars Story. Most recently, he is slated to replace Johnny Depp as Gellert Grindelwald in the upcoming Fantastic Beasts film. 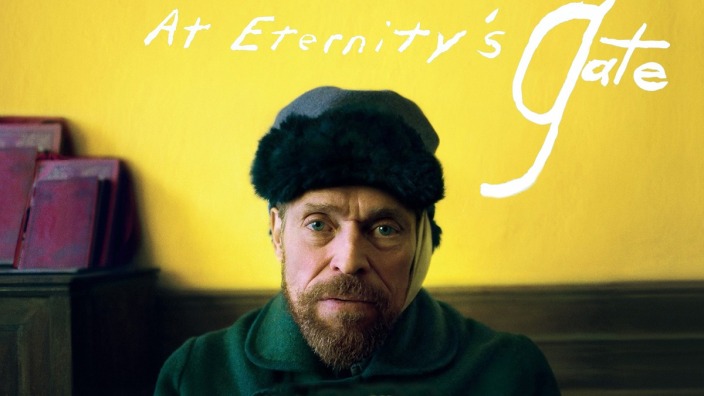