Cultural Diversity: Asians Actors and Directors Are Making Their Mark

It has been slow, but steady progress. Asian actors have traditionally played second fiddle to their Caucasian counterparts. But in recent years, there is a pivot towards diversity in film and TV. Movies such as Crazy Rich Asians would have been challenging to make say, around 10 years ago. But now, it is celebrated.

Late last year, the racy Shondaland series Bridgerton caused a stir when it features a culturally diverse cast in a Regency Period drama, an era where people of colour are not usually cast in roles where the characters held important titles. In season 2, South Asian actor Simone Ashley was cast as its leading lady.

The shift in casting diversity has opened up opportunities for talented Asian actors and directors to mark their mark internationally. In 2021, there is quite a number of movies starring or directed by Asians. Here’s a look at the Asians making a splash in the movies.

The 26th film in the Marvel Cinematic Universe, Eternals is by all means, a movie of mega proportions. And the weight of the movie rests on the shoulders of Chinese filmmaker Chloe Zhao. Zhao first earned praise for her 2017 movie The Rider, which earned nominations for Best Film and Best Director at the Independent Spirit Award. She gained further recognition for her 2020 movie Nomadland, starring Frances McDormand as a woman who leaves her small hometown to travel around the American West. The movie has been a hit at the award festivals, winning awards including three Oscars (Best Picture, Best Leading Actress, and Best Director). Eternals is her first blockbuster.

No Time to Die

The latest James Bond movie was delayed time and again, but interest has not dimmed at all. Helmed by Cary Joji Fukunaga in the director’s chair, this is Daniel Craig’s last outing as the save spy. Fukunaga, a fourth-generation Japanese-American was first noticed for the 2009 Sin Nombre and the 2011 adaptation of Jane Eyre. He was also the first director of Asian descent to win the Primetime Emmy Award for Outstanding Directing for a Drama Series (True Detective). Fukunaga doesn’t just direct, he has also served as a cinematographer and camera operator as well, showcasing his knowledge in all aspects of the film industry. The Fast and Furious franchise started since 2001, and has been steadily gaining fans globally. Out of the 8 movies so far, director Justin Lin has shot 4, having made his franchise debut for The 2006 Fast and the Furious: Tokyo Drift. He took a break for the last two movies and return for Fast & Furious 9, possibly the most ambitious instalment of the franchise. Lin is also slated to direct the 10th movie in the franchise.

Shang Chi and the Legend of the Ten Rings

This is the 25th movie in the Marvel Cinematic Universe (MCU) and the first to feature an Asian superhero. The movie centres on the character Shang Chi, who is drawn into the clandestine Ten Rings organisation and had to confront his suppressed past. Taking on the coveted role of Shang Chi is Simu Liu, whose previous film role is as an extra in the 2013 Pacific Rim. Liu started his acting career in television, and is most noted for his role in the series Kim's Convenience. Awkwafina stars as Katy, Shang Chi’s friend, while veteran Hong Kong actor Tony Leung (In the Mood for Love, Chungking Express) plays The Mandarin, the leader of the Ten Rings terrorist organisation. Crazy Rich Asians alumni Ronny Chieng and Michelle Yeoh also co-star.

Raya and the Last Dragon

This martial arts fantasy film, based on the video game of the same name, is on plenty of gamers’ radar. The film is co-produced by Malaysian-Australian horror maestro James Wan (who also directed Aquaman) and stars British-Chinese actor Lewis Tan in the leading role of Cole Young, a washed-up mixed martial artist and the protagonist. Tan is joined by Ludi Lin (Power Rangers) as Liu Kang, Chin Han (Skyscraper, Ghost in the Shell) as Shang Tsung, Tadanobu Asano (Silence, Midway) as Lord Raiden and Hiroyuki Sanada (Mr. Holmes, John Wick: Chapter 3) as Scorpion. Based on the poem of Sir Gawain and the Green Knight, the medieval fantasy movie casts Dev Patel (Hotel Mumbai, The Man Who Knew Infinity) as its main character- Sir Gawain. Despite Gawain being one of the Knights of the Round Table, Patel was picked because of his talent, not the colour of his skin. The British-Indian actor, who made his film debut in the groundbreaking Slumdog Millionaire, has become a leading actor in his own right. Alicia Vikander and Joel Edgerton co-stars. 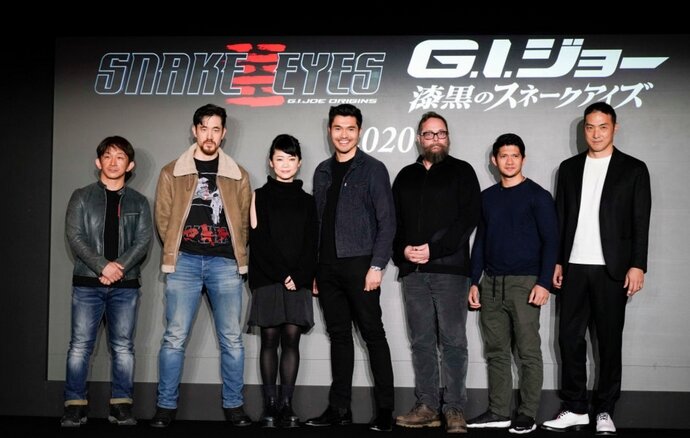 A spin-off of the G.I. Joe film series, Snake Eyes is an origin story of the title character and stars Henry Golding, who has been riding on a wave of success since he made his film debut in Crazy Rich Asians. He takes over the role from Ray Park, who played Snake Eyes in the previous G.I. Joe movies. Fellow Asian actors Andrew Koji (Peaky Blinders) and Iko Uwais, who is best known for this role in the Indonesian movies The Raid and its sequel, round up the Asian cast. The movie also stars Samara Weaving (Ready or Not). Director Jon M. Chu (Now You See Me 2) made a splash with the rom-com Crazy Rich Asians in 2018, and he follows that success with In The Heights, a musical drama based on the 2007 stage musical of the same name by Lin-Manual Miranda. Directing a movie with musical elements is no stranger to Chu, whose past credits include Step Up 2: The Streets and Jem and the Holograms. We are sure it will be colourful and high energy.

22 years ago, M. Night Shyamalan broke into the scene and boundaries with the 1999 The Sixth Sense, catapulting him into global stardom. He followed that with a series of high profile movies (Unbreakable, Signs, The Village), of which some are met with mixed reviews. That never stopped Shyamalan from stepping into controversial territories. His last two movies, Glass and Split, were intriguing, controversial and highly debated. This year, Shyamalan returns to his roots, giving us OId, a supernatural psychological horror-thriller inspired by the graphic novel Sandcastle, which follows a family on a holiday, who discover that the hidden beach they are on is mysteriously causing them to age quickly.