Turbo Kid- A Bloodsoaked Adventure-filled Homage to the 80s Released in 2015, Canadian-New Zealand film Turbo Kid instantly became a cult favourite for its commitment towards paying tribute to the filmmakers' favourite era of pop culture: the eighties! A blast from start to finish, the low-budget film combines several 80s genres like post-apocalyptic fun, gruesome b-movie horror violence, and teen-wish fulfilment to hugely entertaining effect. It's basically a mash-up of everything you loved about the 80s growing up. The narrative revolves around The Kid (Munro Chambers), a comic-book fan turned superhero. He teams up with a mysterious girl named Apple, and an arm-wrestling champion cowboy to take on a tyrannical overlord named Zeus. The film takes place in an alternate version of 1997 in "The Wasteland", where a post-apocalyptic society gets by. The land is littered with trash and ruled by an overlord: Zeus, who controls the land's water supply. He even operates a machine that produces water by grinding people up!

A post-apocalyptic setting and a ruler using water to run roughshod over people... sounds familiar? It's very much similar to a classic in the genre: Mad Max: Fury Road, also released in 2015.

Instead of the giant trucks and buggies that define the world of Mad Max, Turbo Kid and the inhabitants of the Wasteland get around on... BMX bikes. It's a fascinating contrast to typical post-apocalyptic modes of transport but also serves as a possible nod towards the 1983 film BMX Bandits, which starred a young Nicole Kidman. The Australian crime-comedy features a similar cartoonish vibe to that of Turbo Kid.

The 80s, possibly more so than any other era of music, was a soundtrack fever dream. Just about every iconic movie from that decade has an iconic soundtrack to go along with it. Danger Zone. Eye of The Tiger. Hearts on Fire. The Touch. Take My Breath Away. Purple Rain. Don't You Forget About Me. In Your Eyes. Indeed, it was the golden age of movie soundtracks.

So, it should be no surprise that Turbo Kid has a kickass soundtrack. The film even kicks off (with an equally retro title treatment) with a Van Halen-esque guitar solo-filled rocker in Stan Bush's Thunder In Your Heart. If that name sounds familiar, it's because he did The Touch from The Transformers: The Movie. The rest of the movie's score is provided by Montreal synth-duo Le Matos. The product is a really atmospheric ambient score, sometimes eerie, often alien. It's like a who's who of 80s influences: from heavy metal riffing, to 80s synthpop, Daft Punk-esque electronica, and even John Carpenter-inspired pieces. I guarantee you the music of the film will be in your head for days after your initial viewing.

4) The Riddle of Steel

Michael Ironside is a dude you've probably seen and heard in many things but someone whose name you may not immediately recognise. His speciality is playing villains or tough-guy roles. You may recall him as Darryl Revok in Scanners (1981). Or the guy Maverick was constantly annoying in Top Gun (1986), Naval Aviator Lieutenant Commander Rick "Jester" Heatherly. Major Paul Hackett in Extreme Prejudice (1987). Richter in Total Recall (1990). You may have even heard him voice DC Comics' Darkseid, or Sam Fisher from the Splinter Cell games. In short, he's sort of a genre icon.

But it doesn't stop there. While Zeus, obviously has some major parallels to Immortan Joe, he's also an over-the-top villain typical of 80s movies. He dresses flamboyantly and makes overly grand speeches, much like James Earl Jones' Thulsa Doom from 1982's Conan The Barbarian. It's a nice throwback to the unrepentant, totally evil baddie from that era.

5) The Toys That Made Us We've already discussed how Turbo Kid throws numerous nods to the movies and music of the Eighties. So, of course, the filmmakers were going to reference the decade's toy culture as well.

Besides the BMX bike mentioned earlier, The Kid is also a big fan of Turbo Rider. This comic book looks similar in style to G.I. Joe or Transformers. His hideout has lots of neon. Arguably the biggest throwback involves the View-Master toy. The discs show images of dinosaurs, which is used to invoke severely repressed childhood memories for The Kid.

His Turbo Glove weapon may also be a reference to the Nintendo Power Glove, an early attempt at virtual reality gaming. It was prominently featured in the (surprise!) Nintendo-produced film The Wizard. Antagonist Lucas Barton's smug boast of "I love the Power Glove. It's so bad," would go on to become an Internet meme i the gaming community years later. 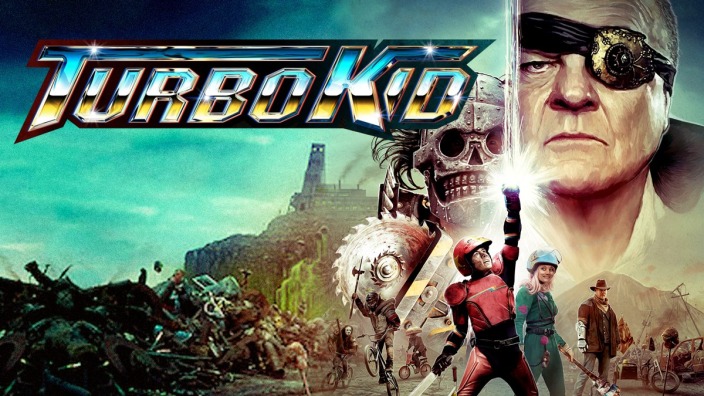