Directed by David Lynch, known for his “Surrealistic” films, the 1984 Dune was a movie ahead of its time. In a distant future setting, the movie, based on the 1965 Frank Herbert novel of the same name, chronicles the conflict between noble families fighting for control over the extremely harsh desert planet of Arrakis, also known as “Dune”. Paul Atreides (Kyle MacLachlan), the son of a noble duke, leads the desert warriors against the enemies in a bid to free this world from the evil galactic emperor’s rule. Beyond fighting their enemies, they also have to battle against the dominant species on this world- vicious giant sandworms that burrow through the desert with a voracious appetite.

The plot sounds like an epic science fiction movie now, but back then, it was a flop grossing over USD30 million with a USD40 million budget. Over time, it started to gain a cult following and fast forward to today, we are looking forward to a Denis Villeneuve adaptation of the novel.

With a new cast and his own version of the movie, Villeneuve has recreated the Dune world that is of equal surrealism to Lynch’s, but with his style- atmospheric score (think Arrival), thematic colour palette (think Maelström) and too close for comfort angles (think Sicario).

Villeneuve aspires to create an otherworldly feel to the desert setting, which he achieved by filming at the sandstone and granite canyons of southern Jordan. He also envisions the movie to be a two-parter. What we’ll see in the theatres this December covers only half the novel.

“I would not agree to make this adaptation of the book with one single movie. The world is too complex. It’s a world that takes its power in details.” To Villeneuve, the novel is not just about a space adventure, but a prophecy. Despite the book being 55 years old, he feels it’s more like a “distant portrait of the reality of the oil and the capitalism and the exploitation—the overexploitation—of Earth. Today, things are just worse. It’s a coming-of-age story, but also a call for action for the youth.” Director Villeneuve with Javier Bardem, who plays Stilgar (previously played by Everett McGill), the leader of the Fremen tribe at Sietch Tabr Like many of his previous movies, which feature strong women, Dune is no exception. Villeneuve expanded the role of Lady Jessica (Ferguson), the wife of Duke Leto and mother of Paul, the protagonist. The Duke and his wife take their son from their lush homeland to this harsh desert for their mission and Villeneuve sees Lady Jessica as more than a mom, but a fearsome character who plays a pivotal role in training her son to prepare for surviving on Arrakis. Ferguson appreciates the tweaks that Villeneuve has done, “Denis was very respectful of Frank’s work in the book, [but] the quality of the arcs for much of the women have been brought up to a new level. There were some shifts he did, and they are beautifully portrayed now.” 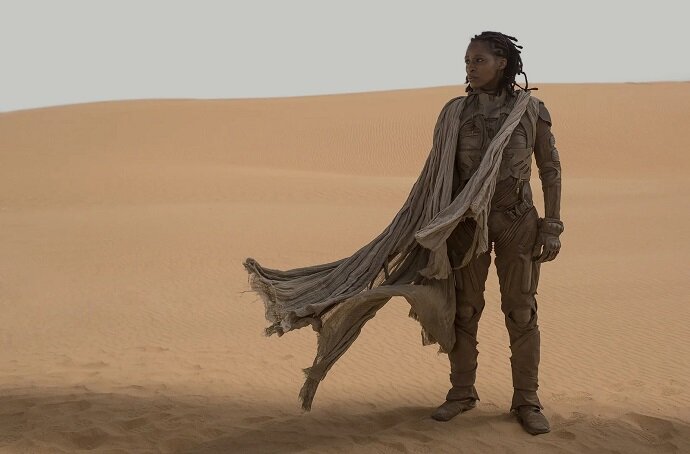 Apart from that, Villeneuve is also keenly aware of the lack of female representation in the characters. He updated Dr. Liet Kynes, the prominent ecologist on Arrakis from a white man to a black woman, portrayed by Sharon Duncan-Brewster, who more than applaud Villeneuve for his bold move, “What Denis had stated to me was there was a lack of female characters in his cast, and he had always been very feminist, pro-women, and wanted to write the role for a woman. This human being manages to basically keep the peace amongst many people. Women are very good at that, so why can’t Kynes be a woman? Why shouldn’t Kynes be a woman?”

Villeneuve shared that the layers in Dune not only has depth but breadth as well, and is the most difficult thing he has done so far. We’ll just have to wait and see.