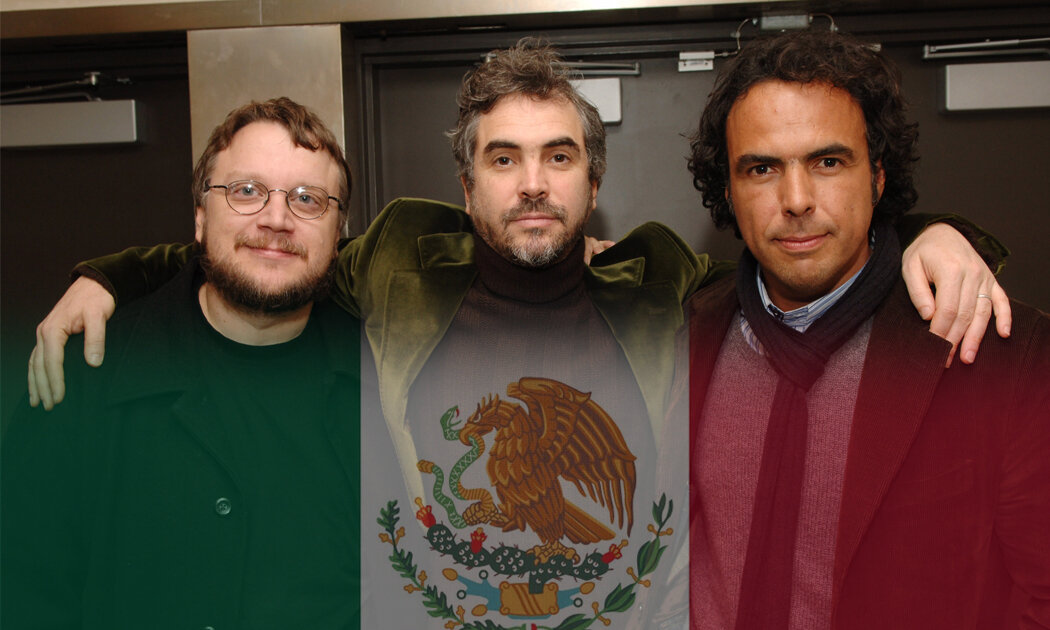 Scary Stories to Tell in the Dark, produced by Guillermo del Toro, is hitting cinemas this week. We couldn't help but be reminded of how much a particular trio of Mexican directors has influenced Hollywood over the past decade. Guillermo del Toro, Alfonso Cuarón, and Alejandro Gonzalez Inarritu are three of the most talented Mexican filmmakers of this generation ushering in a new golden age of cinema. Just earlier this year, Cuarón won Best Director for Roma, making for a remarkable streak of 5 wins in 6 years. (del Toro won for Shape of Water in 2017, Iñárritu with The Revenant and Birdman in 2015 and 2014, and Cuarón having started the streak himself in 2013 with Gravity.) The trio all worked in Mexican television early in their careers. In fact, this long friendship began on the set of La Hora Marcada, a Mexican version television series by Televisa styled after the famous Twilight Zone. Del Toro was working as the director's assistant, while Cuarón worked on special effects. The two wrote and directed the stories with another future frequent collaborator: Emmanuel Lubezki, the future only cinematographer to win three consecutive Oscars. They were later introduced to Iñárritu, who had an even more interesting background: he worked in radio in the '80s and is actually considered a pioneer in the field. Unlike many other TV directors who made good money churning out melodrama for the goggle box, all three directors almost immediately started transiting to the big screen. The Mexican film industry was at a low point when they began in the 1980s. It was primarily made up of raunchy movies, and lived in the shadow of what else... telenovela soaps. Cuarón was the first out of the gate with Sólo con Tu Pareja, a hit comedy (!) co-written with his brother, Carlos. Cronos from del Toro was next, a film that featured some of his soon recognisable darker horror elements with alchemy and vampires. Finally, in 2000, Iñárritu joined the club with Amores Perros, a well-received crime drama that would be the first of his "Trilogy of Death" with 21 Grams and Babel.

Even though they established themselves quickly in Mexico, they saw the bigger picture. Knowing that they had more to give than what the Mexico film industry could provide them, they took another risk and moved to Hollywood. Cuarón made his Tinseltown start with Little Princess (1995), and del Toro did likewise with Mimic (1997). Both films experienced moderate success.

They're always credited on each others' films!

The styles of each three directors seem to have little to almost nothing in common. Each director has a distinct style of their own, and all work on both big productions and more intimate, personal projects from time to time. Iñárritu is probably most recognised for his dysfunctional worlds, and work with dramas. Del Toro is known for his Lovecraftian influences, spirits, demons, monsters, and fairy tales. Cuarón's work addresses class differences (Children of Men), and he seems to particularly enjoy working within various genres and subverting the various clichés within them.

The three are always seeking each other's advice on whatever they're working on, and are always credited on each other's movies. Sometimes, they've been known to dish out brutally honest assessments. I tell them if what I see is trash." says Del Toro. "That's what friends do."