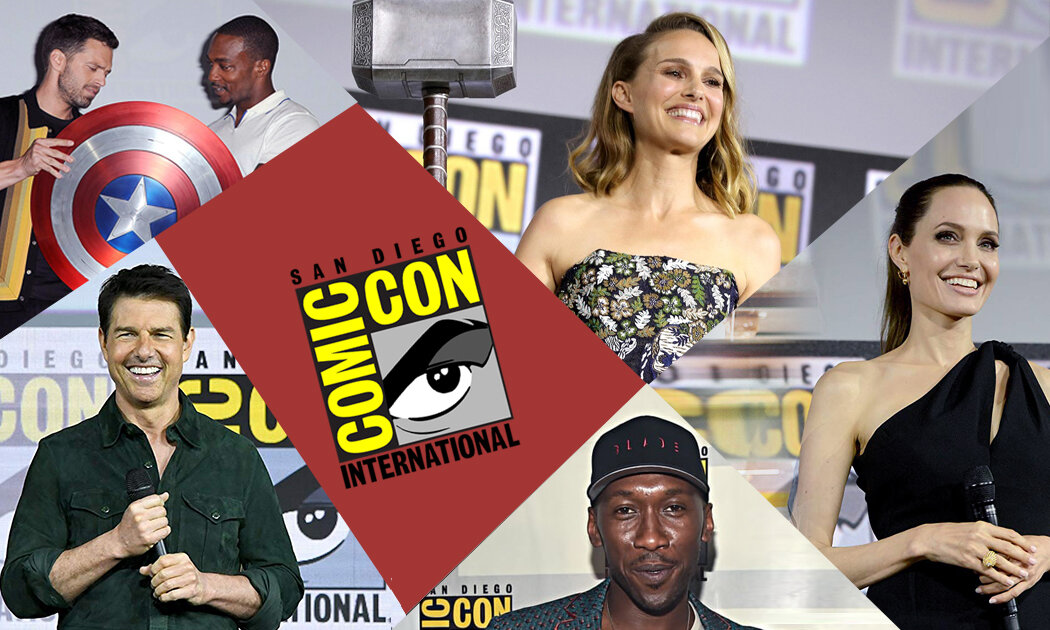 The ladies are bringing out the big guns.

The 2019 San Diego Comic-Con ended on a high note with big announcements from Marvel. While we were just wondering how to carry on living after Marvel wrapped up their current MCU (Marvel Cinematic Universe) with the release of Spider-Man: Far From Home, Marvel assures us they’re not resting on their laurels. Angelina Jolie, Scarlett Johansson and Elizabeth Olsen all appeared at the Comic-con, announcing their Marvel projects. Jolie will be starring in The Eternals, alongside Richard Madden, Salma Hayek, Kumail Nanjiani and Brian Tyree Henry. There was no sign of Keanu Reeves, despite recent rumours about him joining The Eternals and finally becoming a part of the MCU.

Johansson shared more about the Black Widow standalone movie (out May 2020), where she will be joined by the likes of David Harbour, Florence Pugh and Rachel Weisz. Olsen revealed she will have a significant role in Doctor Strange in the Multiverse of Madness (May 2021) alongside Benedict Cumberbatch. The biggest surprise is the appearance of Natalie Portman. Director Taika Waititi, Chris Hemsworth and Tessa Thompson took to the stage to share about the upcoming Thor movie, Thor Love and Thunder (out 2021), and Portman joined them on stage, carrying a hammer. She will be playing a female Thor in the movie! The actress is hyped about the role, “Feels pretty good. I’ve always had a little hammer in me,” she shared with the cheering crowd. Waititi handing over the hammer to Portman

Here are other highlights from the four-day convention.

Marvel president Kevin Feige is on hand to share the next phase of MCU with 23 films so far. Along with the above-mentioned news of Thor, Black Widow and the Eternals, Feige also dropped a piece of news that made fans elated. Blade is coming back, in the form of Mahershala Ali. The Wesley Snipes look-alike does look like the ideal candidate to portray the vampire hunter.

Apart from that, audiences can expect Black Panther 2, Guardians of the Galaxy Vol 3 and Captain Marvel 2. Also on the cards is Fantastic Four, now that Fox is part of the Disney family.

We can also look forward to Shang-Chi and the Legend of the Ten Rings coming our way in 2021. Canadian actor Sim Liu will play the title role. The movie also features familiar Asian actors such as Tony Leung as the real Mandarin; Awkwafina will also have a role in the film. With Marvel coming in strong, DC is not going to just sit on the side lines. They are not just fighting head to head with Marvel with live-action movies like the Wonder Woman sequel and the new Batman movie starring Robert Pattinson. DC is going strong into animated movies. The first in 2020 is Superman: Red Son, where baby Kal-El’s ship crashed in Ukraine instead of Kansas. Superman wasn’t raised as a level-headed Clark Kent, but a Soviet superweapon. Sounds like a blast to us. Following Red Son will be Justice League Dark: Apokalips War, where Swamp Thing, Black Orchid, Batman and more will fight the gods of Apokalips. Then there is Superman: Man of Tomorrow, which will dive into Superman in his early days.

Terminator: They are Back! When the first Terminator movie graced the big screen in 1984, it was a low budget movie starring a bodybuilder (Arnold Schwarzenegger) and a little-known Linda Hamilton. 28 years later, the pair is back in action in Terminator: Dark Fate. Between then and now, there was the highly popular Terminator 2: Judgement Day, followed by a few duds. Well, it doesn’t matter, because James Cameron is back, in the writer’s chair this time, penning the direct sequel to 1991’s Judgement Day.

The biggest reveal at Comic-con is the return of Edward Furlong as John Connor. Furlong, who was plucked from obscurity, made his debut in Judgement Day and shot to immense fame, especially in Japan. However, after following up with movies like A Home of Our Own (1993), Little Odessa (1994), American History X (1998), Furlong fell wayward and never quite recover to maintain a foothold on his acting career. It will be interesting to see all three- Furlong, Hamilton and Schwarzenegger together in action again. Terminator: Dark Fate will be out in early November. At least not from what we can see in the new Top Gun: Maverick trailer, which is a major flashback to the 1986 movie. Cruise himself made a surprise appearance at Paramount Pictures’ Terminator: Dark Fate panel at the famous Hall H to debut the trailer. A direct sequel to 1986’s Top Gun, Cruise will reprise his role as Pete “Maverick” Mitchell, now a flight instructor at the Top Gun- the Navy’s Fighter Weapons School at Naval Air Station Miramar. He is the instructor to the son of Goose, his late partner. The trailer showed Cruise speeding away on a motorcycle, wearing his leather bomber jacket, playing volleyball and of course, fighter jets. We don’t need to know anything more about the story, which the trailer doesn’t reveal anyway. All we need to know is, come next June, we’ll be flocking to the cinema to swoon over the 54-year old.

It Sent Shivers Down Our Back

Top Gun: Maverick was not the only movie that got gives us the shivers. It: Chapter Two gave us the chills, but not the good kind. We follow the kids of Derry 27 years later, now all full-grown adults living their lives in different parts of the country, except for one, who stayed back to report any weird occurrences. And when something off does happen, the gang got called back to Derry to confront Pennywise, except this time, it’s a lot creepier. The trailer was fast-paced and intense, and we can't wait for this September to see it.

Were there any movie news at the San Diego Comic-Con that you were most excited about?