Who would have thought that a movie featuring an all-Asian cast, based on a novel by a Singaporean and set in Singapore would dominate the box office in its five-day opening with a staggering $35.3 million? Certainly not the director, the appreciative cast and definitely not the author- Kevin Kwan. Crazy Rich Asians became the best opening for any comedy for the year so far. Not just that, it has also racked up nominations for the cast and movie in the upcoming Golden Globes (Best Motion Picture- Musical or Comedy, Best Actress nomination for Constance Wu) and Screen Actor Guild Awards (Best Ensemble). And yes, there will be sequels. That's right, there will be not just one, but two on the horizon.

What Is the Storyline for Crazy Rich Girlfriend?

Kwan actually wrote a trilogy, and the first sequel is based on its second book- China Rich Girlfriend. The inspiration for the title comes from one line in the first novel, in which Nick’s mother, Eleanor, bellows over the wealth of Chinese billionaires: “These people aren’t just everyday rich with a few hundred million. They are China rich!” The events in this book take place two years after Crazy Rich Asians. In the first movie, through the meddling hands of Nicholas’ (Henry Golding) mother, Eleanor Young (Michelle Yeoh), Rachel (Constance Wu) found out that her biological father didn’t pass away as her mother had told her. In the sequel, Nic and Rachel decided to head to China to hunt him down. They find out that Rachel’s father, Bao Gaoliang, is a top politician and a pharmaceutical magnate in China. He lives with his wife and has a problematic son named Carlton Bao. While the first movie was filmed in Singapore, the sequel shifts to Shanghai.

Who’s Back in Business? Expect the three main characters to be back. Yup, Nick, Rachel and Eleanor will all have key roles in the movie.

Other characters like Astrid (Gemma Chan) will also be back. In fact, there is a storyline where Astrid and her ex-boyfriend Charlie Wu (Harry Shum, who made the briefest of cameos), will rekindle their flame.

Who’s Back in Business in a Big Way 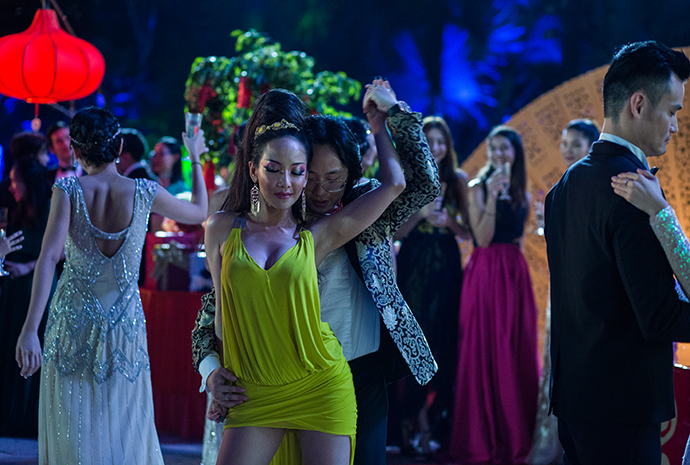 Kitty Pong (Fiona Xie) that’s who! She was a gold digging “actress” who’s keener on hooking a “big fish” as a husband in Crazy Rich Asians, gyrating to whomever she sees as a potential candidate. Her last victim in the movie was Bernard Tai. In the sequel, she became Mrs. Tai, living the high light she’s always wanted in Hong Kong. This also means comedian Jimmy O. Yang will also be back.

Who’s New in the Movies?
While the first movie focuses on Rachel and Nick, this sequel expands its repertoire to include new characters. Carlton Bao, as mentioned above, is Rachel’s half-brother and will have a significant role in the sequel. Another key character is Collette Bing, the daughter of China’s third richest man, and Carlton’s girlfriend.

Who are Unlikely to be Back? She’s one of the beloved characters in the movie, but Awkwafina’s Peik Lin is unlikely to be back in the sequel. Her character is Singaporean and since the sequel has moved to Shanghai, Awkwafina’s screen time has run its course with the movie. Ken Jeong, who plays Peik Lin’s father is also unlikely to be back, based on the same reasons. The opinionated but funny Oliver T'sien (Nick Santos), cousin to Nick, has also seen his character plateaued in Crazy Rich Asians.

When are the Movies Out? Hold on to your horses. While the sequels are being greenlit, it might be a while before you can catch them on the big screen. Director Jon M. Chu will be back at the helm, but he’s committed to In the Heights, an adaptation of Lin-Manuel Miranda's first musical due for a 2020 release.