15 Things You Have to Know Before Watching Thor: Ragnarok For a title deeply entrenched in the Marvel Cinematic Universe (MCU), it’s interesting that Taika Waititi is put at the director’s helm for Thor: Ragnarok. His previous works were offbeat, indie-type projects that scream Sundance rather than blockbuster. From the movie trailer, it’s pretty evident that Thor’s third outing is a stark contrast to the darker and moodier Thor: The Dark World (2013). You also get a glimpse of Waititi’s sense of quirkiness, and it’s looking good so far. Before we head to the theatres to catch the 17th film of the MCU, here’re 15 things you should know. 1. What exactly is Ragnarok? According to Norse mythology, Ragnarok means “Twilight of the Gods”. This myth depicts the eventual devastation of the universe and mankind, including the deaths of key characters in Norse Mythology like Odin (Anthony Hopkins), Thor (Chris Hemsworth), Loki (Tom Hiddleston), Heimdall (Idris Elba), Freyr, Sol and more. And amidst this wreckage, a new generation of gods, the offspring of Odin, Thor and Sol will rise, and the start a new cycle.

2. Just who is Taika Waititi? For his Hollywood directorial debut, Waititi sure picked a heavyweight. While his name might not be familiar to us, the Kiwi is a star in his native New Zealand. Apart from directing, Waititi is also a writer, actor, painter, and comedian. He was nominated for an Academy Award back in 2004 for his short film, Two Cars, One Night. His 2016 movie, Hunt for the Wilderpeople, which he wrote, directed, produced and starred in, was the highest grossing film in his homeland, topping his own movie Boy from 2011. Way before he became a director, Waititi was a half of a comedy duo that won New Zealand’s highest comedy accolade- the Billy T award in 1999. Waititi often appears in movies he directs or writes. In Thor: Ragnarok, he appears as the character Korg, a Kronan. Watch out for him.

3. We have Cate Blanchett’s sons to thank Even with her depth in acting and range of characters she’s played, it’s still unusual to see Cate Blanchett as a butt-kicking MCU character. According to the actress and mother of three boys (and an adopted daughter), Blanchett accepted the role to make her children, who are Marvel comic fans, happy. It was her eldest son Dashiell John who suggested that she makes a good Hela, and even told her that the role will “be a career boost”. From what we can see from the trailer, Blanchett makes one helluva villainess. Incidentally, Hela is the first main female villain in the MCU.

If you’ve seen the movie’s trailer, you would have caught the scene where Thor was put in a fighting pit against The Hulk in Gladiator style. He was seen saying this line when he first saw that his opponent was hulk, “we know each other, he’s a friend from work!” The line wasn’t in the original script, but was suggested to Chris Hemsworth on the spot by a child from the Make-A-Wish foundation who was visiting the movie set the day the scene was filmed. The release of the movie in 2017 is pretty significant. It marks the 55th anniversary of Thor (August 1962) and The Incredible Hulk’s (May 1962) debut in Marvel Comics.

6. Look at those biceps! To reprise his role as Thor, Chris Hemsworth had to bulk up quite a bit. He followed a strict diet, packing in around 6,000 calories a day and work out up to seven times a week. His trainer, Luke Zocchi, shared that Hemsworth put on 20 pounds of muscle, with an "old-school bodybuilding regime lifting a large weight-load for a small number of reps." His workout regime was tailored to work on the parts of his body that were shown the most in the movie. So ladies, do take note of his impressive biceps. In fact, Cate Blanchett was also very impressed with Hemsworth’s biceps and his overall physique, which brings me to…

7.  She works hard for the money To prepare for her role as Hela, Blanchett learned capoeira, a Brazilian martial art. But seeing how ripped Hemsworth was, she approached his trainer Zocchi to train her on the film set. They would fit in 20-minute workout routines in between scenes. The Oscar-winning actress shared, “I got fit, I mean properly fit, for the first time.” If you’ve paid any attention to the trailer, you would have noticed that the humour level is pretty high. Director Waititi has said that for this movie, he wanted to show off Hemsworth’s comedic talent, “He's so good and underutilized in that department. He's legitimately one of the funniest things in this film." If the trailer was any indication, it feels like Thor: Ragnarok has a style that’s throwback to films in the 80s, and that was exactly the direction Waititi was headed for. His vision for the film was a "1970s and 80s science fiction fantasy."  His biggest inspiration wasn’t any other sci-fi movie but Big Trouble in Little China (1986), "It's a fun adventure film that has big stakes, but also has a breakneck speed and takes you on a crazy adventure." Keep your eyes peeled for a number of special appearances in the movie. We know Doctor Strange will appear, but a certain Bourne and a Jurassic Park alumni also have cameo roles in the movie. Apart from that, Thor: Ragnarok is also a family affair. Blanchett’s youngest son, Ignatius Martin Upton has a small role in the movie, and so does Hemsworth’s oldest brother, Luke Hemsworth . 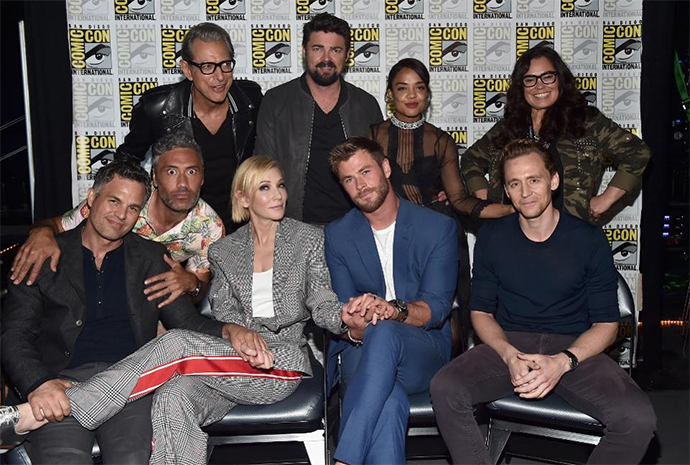 To keep a light yet collaborative mood among the cast on set, around 80 percent of the dialogue in the film was improvised.

12. A different Valkyrie from what we know In the comics and Norse mythology, Valkyrie was a light-skinned, pale blonde, female Viking warrior. In Thor: Ragnarok, she’s played by African- American actress Tessa Thompson. About her casting, Waititi stressed that his decision was not for the sake of diversification, but he felt compelled to choose the best candidate for the job, "You're working with comic-book Vikings, so you have to look at the source material as a very loose inspiration. A character's skin tone and hair colour don't matter. I think the story is king, and you want the best person for the job, and Tessa was the best person." Jeff Goldblum plays the Grandmaster in Thor: Ragnarok and his character has blue skin in the comics. Waititi made the decision to not apply any blue on Goldblum because he felt Goldblum's acting is good enough to bring out the eccentricities of the Grandmaster and doesn’t need the blue application. On top of that, it turns out Goldblum had already played a blue-coloured figure before, in Earth Girls Are Easy (1988). In Japan, the movie is known instead as Mighty Thor: Battle Royale. The decision was made because the term Ragnarok is not widely known in the region. Instead, it pays homage to the movie Battle Royale by Koushun Takami, about a group of students trapped on an island and had to fight each other to death.

Catch Hemsworth in an interview about playing Thor: