Celebrities Who Married Their Fans Finding true, everlasting love is an uphill battle. Staying married is an even tougher one, even (or especially) for celebrities. Some succeed, while others are still trying and waiting for their soulmates. Two stars in the family could be hard on the relationship as they receive twice, or more, of the attention. While marrying a civilian might not be as exciting, it definitely takes some pressure off the marriage. This is exactly what the following stars did!

Matt Damon
Damon met his wife, Luciana Barroso, at a Miami restaurant where she was working. Barroso was previously married with a daughter, but her marriage had ended before she met Damon. They started dating and in 2005, they got married. The couple has a two-week rule: they never spend more than two weeks apart. The thought of being away from his spouse for more than two weeks is simply unbearable for Damon who called Barroso his soulmate. Why can’t all husbands be like Damon? Julia Roberts
Roberts dated Liam Neeson when she was 19 years old and was married to Lyle Lovett for almost two years. She found her husband of more than 14 years on the set of The Mexican: Danny Moder was a cameraman and a fan of hers. She gave birth to a pair of twins when she was 37 years old, and a daughter when she was 39.

Her secret to a successful marriage? Kissing, apparently. 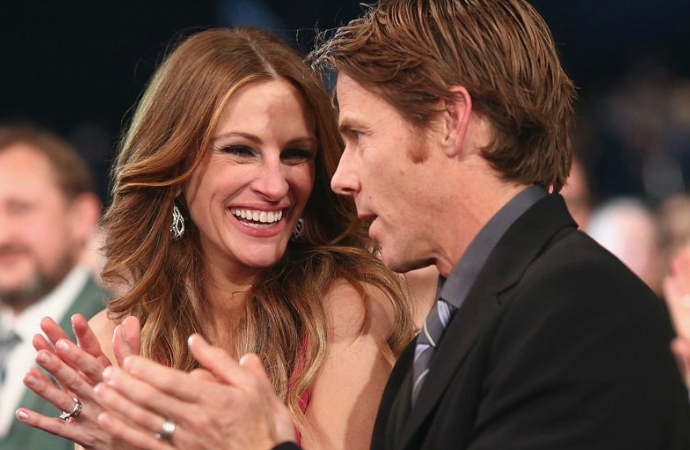 John Travolta
Before Liam Neeson, the mobster hitman was all the rage. A good example was John Travolta, as Vincent Vega in Pulp Fiction, with his hair all slicked back, looking stylish and dangerous.

When Travolta met Kelly Preston, his wife for 25 years, she was still married. While Travolta had a good impression of Preston, they did not cross each other’s path again until 1990. He proposed just six months into dating and they have remained devoted to each other ever since. Travolta has always said that he had waited for Preston from the moment he set eyes upon her. However, Preston claims she knew she was going to marry Travolta because she saw it in a vision: She came out of a film and saw the poster of Grease when she was just 16 years old. Nicolas Cage
For Alice Kim, it was a real-life fairy tale. She was a waitress at a restaurant when she recognised Nicolas Cage sitting at the table. He asked for her number when she asked for his autograph.

Cage had been married twice before meeting Kim. Even with celebrity status, it was an uphill task for Cage to convince his Korean mother-in-law that he was right for Kim; she insisted that Cage was too old for her daughter. Kim was only 19 years old while Cage was 39. Still, they tied the knot six months later.

While Cage remains devoted to his wife of 12 years, Kim might be thinking otherwise as she has allegedly been caught regularly meeting another man. Celebrity divorces happen so often that when a famous couple remains blissfully married year after year, it's a more surprising story. Fighting each other and still feeling lucky after decades of marriage seems to be as rare as being struck by lighting.