Six Exciting Movies We Can’t Wait to Watch in the First Half of 2023!

Ranging from enchanting romantic comedies to action-packed thrillers, there are certainly countless films to look forward to this year! Due to the fact that we cannot cover every single newly released film, we decided to narrow down to one movie per month for the first half of 2023. Read on to find out what our six phenomenal picks include. 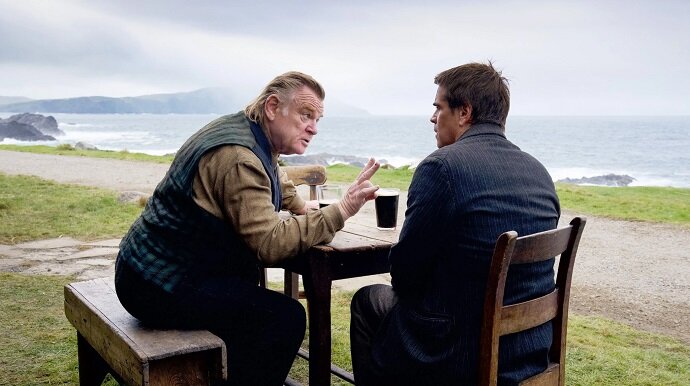 To start this year off strong, here is a masterpiece - The Banshees of Inshirin, a film taking place towards the end of the gruesome Irish Civil War. The film has received high praise and bagged numerous awards including three Golden Globes (Best Motion Picture - Musical or Comedy, Best Screenplay and Best Actor). Directed by Martin Mcdonagh, this captivating film reunites Colin Farrell and Brendan Gleeson from In Bruges, which was also written and directed by Mcdonagh. The film features a man named Padraic (Farrell) who resides on a remote island off the coast of Ireland. One day, Padraic’s close friend Colm (Gleeson) decides to not be his friend anymore, and suddenly stops talking to him without even a mere explanation. This puzzles Padraic greatly, and he tries everything to get Colm to like him again, yet Colm continues to rebuff him. Their conflict quickly escalates and ultimately leads to unexpected violence. Through the two men’s inexplicable fighting, it reveals the themes of human friendship, and how the lack of it affects everything. The Banshees of Insherin is a poignant yet riveting film, and is a must-watch if you enjoy dark comedy.

Ant Man and the Wasp: Quantumania The next film we want to introduce is Ant-Man and the Wasp: Quantamania, the upcoming film in Marvel’s Cinematic Universe, scheduled to be released on February 16th, 2023. This film opens with Scott Lang (iconically played by Paul Rudd) who is trying to make up for lost time with his daughter, wife and friends, after being stuck for 5 gruesome years in the Quantum Realm due to the repercussions of “Endgame”. Things are going perfect for Scott, until Cassie (his daughter, superbly played by Kathryn Newton) creates a new satellite for deep space, allowing people on Earth to send signals to the Quantum realm, which regrettably pulls Scott and Cassie into a hidden universe, before they had the chance to shut the device off. In this secret universe, Scott and Cassie encounter eccentric creatures, as well as the infamous villain, Kang the Conqueror- the time traveling, dimension-hopping nemesis of the Avengers. Kang desperately needs Ant Man’s help to escape the Quantum realm, with the ultimate goal of having the immense power to rule every single timeline and every single universe in the multiverse. Not only will this motion picture keep you on the edge of your seat, it will also present evolving relationships and journeys of self discovery. Ant Man and the Wasp: Quantumania should unquestionably be a must-watch film for 2023.

Shazam! Fury of the Gods 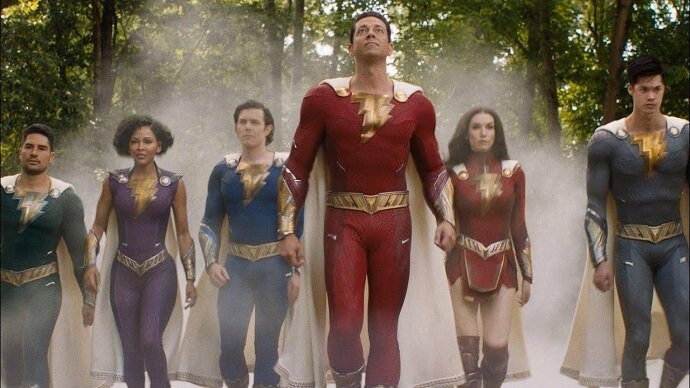 Shazam! Fury of the Gods (releasing March 16th, 2023), is a highly anticipated sequel to the 2019 film Shazam. Directed by Swedish filmmaker David Sandberg who has directed Lights Out, this invigorating motion-picture features Billy Batson (outstandingly performed by Asher Angel), who was chosen by an ancient wizard to be his new successor, granting him the unique power to transform into a superhero alter-ego, (hilariously played by Zachary Levi) everytime he declares the word “Shazam!” Additionally, all of Billy’s foster siblings got a hold of the wizard’s staff as well, granting substantial power to his entire family. Known as the “Shazam family”, Billy and his siblings use their powers to fight crime, as well as bestow safety and peace in the city. This is until they are faced with a colossal matter - the Daughters of Atlas: Anthea (Rachel Zegler), Kalyso (Lucy Liu) and Hespera (Helen Mirren). The Daughters of the Greek Titan, Atlas, are furious that Billy’s family stole the power that was supposed to be theirs, and they are willing to wreak havoc upon the city in order to receive what they think is rightfully theirs. A tale involving harsh battles, grappling with a dragon, and fighting for those you love, Shazam! Fury of the Gods is undoubtedly an entertaining film filled with surprises and adventures that will take you out of this world. 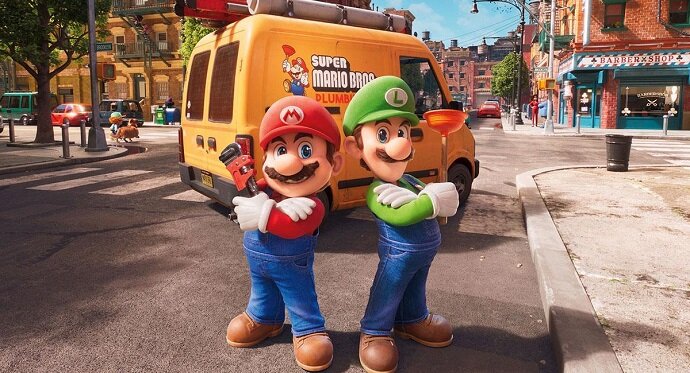 The Super Mario Bros Movie, one of our top-choice films for 2023, is expected to release on April 6th! Produced by Illumination and Ninento and directed by Aaron Horvath and Michael Jelenic, this animated motion picture is based on the popular Super Mario Bros video game franchise on Nintendo. This distinctive film opens with a dedicated Mario (voiced by Chris Pratt) along with his comrades Princess Peach (Anya Taylor-Joy) and Mushroom Toad (Keagan Michael Key), who are all on a mission to Mushroom Kingdom to rescue Mario’s brother, Luigi (Charlie Day), from the notorious Bowser (Jack Black). Bowser envisions himself ruling the world, and destroying the Mushroom kingdom where all of Mario’s friends and family live. Keeping Luigi as a captive, Bowser makes his way to the kingdom, while Mario, Princess Peach and the rest of their small yet strategic team create their master-plan in defending their kingdom. With numerous scenes in the movie reflecting the Super Mario Bros racetracks on Nintendo, this lively film not only brings back nostalgic memories, it also includes an element of originality, like no other movie seen before. The inclusion of quality music, as well as the abundant attention to detail, make the upcoming Super Mario Bros movie a sensational motion picture if you are one for fantasy, adventure and comedy films! 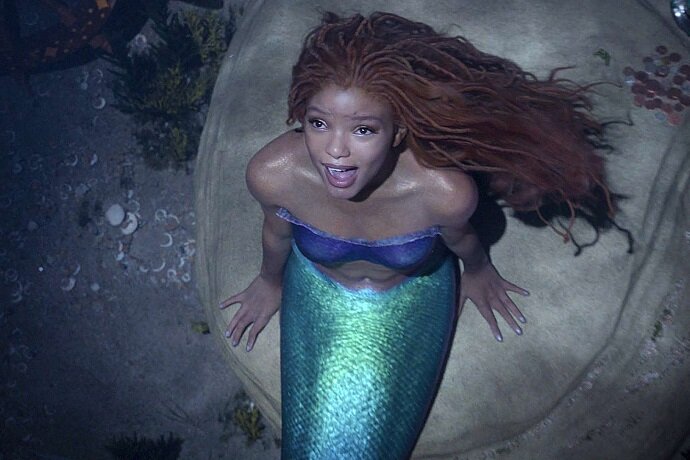 The Little Mermaid is a fantasy musical film telling the tale of one of the greatest Disney princesses of all time -  Ariel. Helmed by Oscar-nominated director Rob Marshall (Chicago), the live-action version of the classic fairytale is finally coming to theaters on May 25th, 2023. This film opens with a stunning young mermaid, Ariel (Halle Bailey), who meets an attractive prince, Eric, (Jonah Hauer-King) and ultimately falls in love with him. Desperately wanting to get to know the prince more, she unknowingly makes a deal with the iniquitous sea witch, Ursula (Melissa McCarthy), trading her melodious voice for human legs so she can experience life on land and impress the prince. Despite the fact that mermaids aren’t supposed to interact with humans, Ariel decides to follow her heart, potentially endangering her life, as well as her father's crown. Starring Halle Bailey, an African American actress, as Ariel, this film signifies the importance of representation in the film industry. Following the recurring themes of love and self discovery, The Little Mermaid will undoubtedly take you to another universe!

Indiana Jones and the Dial of Destiny

After 15 years, the long-awaited sequel to the Indiana Jones franchise is finally hitting the big screen, directed by James Mangold (Logan). The film begins with a scene of Jones’s (an 80-year-old Harrison Ford) thrilling car chase, with a voiceover explaining how since then, he has been living a peaceful and quiet life, working as a professor. However, his monotonous life quickly stirs up when he is forced to compete with a group of obstinate Nazis in pursuit of a forceful ancient artifact - the Dial of Destiny. This powerful object has the potential to time travel, which could be one of the reasons why Voller (Mads Mikkelsen), a Nazi scientist who finds work at NASA post WWII, is so desperately in need of it - to permit him to entirely rewrite the history of World War II, making the Nazis the victor in this film. The valiant Indiana Jones is exceptionally courageous, using his strength and determination to solve this multifaceted challenge, as well as try to conquer the vicious Voller. Taking place amid the 1969 Space Race, Indiana Jones: The Dial of Destiny is a powerful film filled with confidential matters and seemingly impossible situations to uncover, recounting yet another tale of the celebrated Indiana Jones. Releasing on June 29th, 2023, this film will surely be a staple in your list of films you can’t wait to watch in 2023. To wrap up, 2023 will be an astonishing year in the film industry, and we are highly anticipating these upcoming films! Filled with adventure, romance, comedy and thriller, these 6 motion-pictures will keep you entertained for hours on end. Featuring celebrated actors and high quality visuals, we cannot emphasize how important it is to keep these films on your 2023 movie list!