The future of moviegoing as a collective pastime has been up in the air for almost two years now. 2021 saw further developments in the COVID-19 pandemic, as people around the world have attempted to adjust to a new normal in various senses. In some parts of the world, movie theatres and other public venues reopened in full force. Often, there would be periods where things would seem to improve, and then new restrictions implemented shortly after. Amidst this volatility, it seems audiences are returning to theatres, but now more than ever, it takes certain types of movies to justify a trip to the cinema. While movies have become more accessible at home, with studios experimenting with day-and-date streaming releases or shortened theatrical exclusivity windows, going to the movies appears to be making a comeback. Here is a countdown of the top 10 highest grossing movies of 2021, based on worldwide box office takings (all figures in US dollars).

Arguably the most divisive entry in the Marvel Cinematic Universe (MCU) yet, Eternals has the lowest Rotten Tomatoes critics’ score of any movie in the franchise (49%). However, the superhero space opera also has its fans and features Marvel’s most diverse team-up yet. The star-studded cast includes Gemma Chan, Richard Madden, Don Lee, Salma Hayek, Kumail Nanjiani and Angelina Jolie. Hot off Best Picture and Best Director Oscar wins for Nomadland, Chloé Zhao took the plunge into big-budget studio filmmaking. Some feel Eternals’ emphasis on character drama and exposition was boring, while others consider it a refreshing change from the usual tone and pace of MCU films. 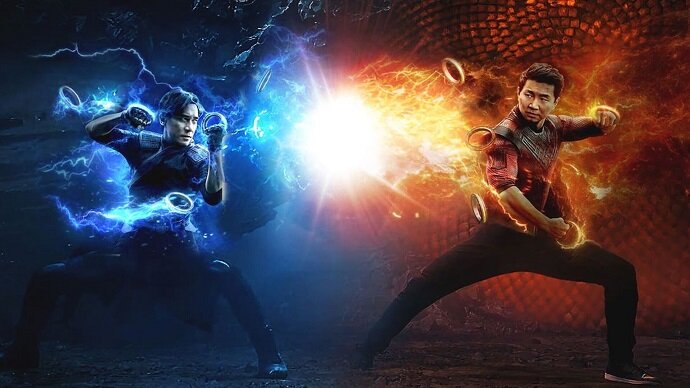 Also an MCU film, Shang-Chi introduces movie audiences to Marvel Comics’ titular ‘master of kung-fu’. Attempting to blend the MCU formula with influences from wuxia movies, the film emerged a critical and commercial hit, despite having detractors in the run-up to its release. Star Simu Liu is set to play a major role in the future of the MCU, but it is legendary Hong Kong actor Tony Leung who steals the show. Making his Hollywood debut, many audiences outside Asia are discovering Leung for the first time via his performance as Shang-Chi’s father Wenwu, a villainous but nuanced character. The film also stars Awkwafina, Meng’er Zhang and Michelle Yeoh. Director Destin Daniel Cretton has signed on for a sequel and is also developing a spin-off TV series for Disney+.

In 1962, the most famous movie monsters from Japan and America faced off in King Kong vs. Godzilla. Almost 60 years later, they were long overdue for a rematch. In September 2015, when Legendary Pictures shifted the then-upcoming King Kong origin movie Kong: Skull Island from Universal Studios to Warner Bros., it ignited speculation that a crossover between Godzilla and King Kong would take place. Directed by Adam Wingard, Godzilla vs. Kong is the fourth film in Legendary’s Monsterverse, preceded by Godzilla (2014), Kong: Skull Island and Godzilla: King of the Monsters. Because of how King of the Monsters underperformed, Godzilla vs. Kong was initially slated to be the final entry in this iteration of the franchise, but its success has led to development of future movies, with Son of Kong being a rumoured follow-up. Godzilla vs. Kong is the only Warner Bros. film to have cracked the top ten at the global box office in 2021, owing in part to the studio’s decision to debut their films simultaneously in theatres and on the HBO Max streaming service in the US. 2018’s Venom became something of a surprise hit. The comic book movie’s road to the screen was a bumpy one: it was originally intended to have been connected to the Amazing Spider-Man series of films but was made a standalone project after The Amazing Spider-Man 2 underperformed. Fans were initially sceptical that a movie about one of Spider-Man’s most iconic villains was now completely removed from the web-slinging hero himself. However, fans responded positively to the unexpected buddy comedy elements of Venom, that are only more evident in the sequel. Making good on the post-credits scene promise of the first movie, Venom: Let There Be Carnage features Woody Harrelson as Cletus Kasady/Carnage, facing off against Tom Hardy as Eddie Brock/Venom. A post credits scene teases a connection to the larger environment of Marvel movies, meaning there’s no telling where a third movie could go.

The third instalment in the blockbuster comedy-mystery series directed by Chen Sicheng was a major hit over the Chinese New Year (CNY) period. The Detective Chinatown movies star Wang Baoqiang as con artist Tang Ren and Liu Haoran as his genius detective nephew Qin Feng. This instalment was initially slated to open on CNY in 2020, with RMB 200M (USD 31M) worth of presold tickets needing to be refunded. The anticipation continued to build, with the filmmakers and stars participating in an online marketing blitz after having already done a physical promotional tour in 2019-2020. Set in Tokyo, the film is also building towards a Marvel or Fast and Furious-like shared universe, teasing a fourth instalment to be set in London. Detective Chinatown 3 is the first of several Chinese movies that are on this list, indicating the increasing power of moviegoers in China. The ninth instalment in the main line of Fast & Furious films is one of several movies on this list that was slated for a 2020 release and then delayed until 2021 because of the Covid-19 pandemic. Vin Diesel, Michelle Rodriguez, Tyrese Gibson, Ludacris Jordana Brewster, Helen Mirren and Charlize Theron all return from previous Fast & Furious films. This movie introduces John Cena as Dominic Toretto’s long-lost brother Jakob. F9 also addresses the “Justice for Han” fan campaign by bringing Han (Sung Kang) back from the dead. The film marks the return of director Justin Lin, arguably largely responsible for turning the series into a global blockbuster franchise, after he sat out the seventh and eighth films. The behind-the-scenes drama, including the ongoing feud between Diesel and Dwayne Johnson (Diesel publicly petitioned for Johnson to return to the franchise, an offer Johnson refused) further sustains interest in this mega-franchise. Lin will also helm the 10th and 11th films, currently planned to be the final two in the series. The 10th movie is slated for released in 2023. Isn’t it fitting that this Bond film’s box office takings should end in “007”? Another victim of repeated pandemic-related release date delays, No Time to Die finally hit theatres in late September 2021. The film is the fifth and final entry starring Daniel Craig, who overcame initial backlash towards his casting to eventually become what some Bond fans consider the best actor to don the tuxedo and order the vodka martini. Unlike previous Bond actors who did not know in advance that their last film would be such, No Time to Die was intended to finish the character arc of Daniel Craig’s Bond. While some of the turns the movie takes are controversial, it has received generally positive reviews for the bold directions in which it takes the storied franchise. Unlike most of the entries on the list, this film isn’t a tentpole action blockbuster or hotly anticipated sequel. Instead, it is an intimate comedy-drama. Starring, directed by and co-written by actress/comedian Jia Ling, Hi, Mom is about the protagonist Xiaoling travelling back in time and forming a relationship with her then-college-aged mother Li Huanying. The movie holds deep personal significance for its director/star. It is Jia’s tribute to her late mother, who was also named Li Huanying and died just before Jia started college. Hi Mom’s immense success can be partially attributed to how many in China and around the world were separated from their families during the Chinese New Year period because of the COVID-19 pandemic, finding this tale of familial bonds to be especially resonant. Hi Mom has overtaken Wonder Woman as the highest-grossing film from a solo woman director. This epic war film pulls out all the stops: with a budget of $200 million, rivalling most Hollywood blockbusters, it is the most expensive Chinese film to date. The trio of Chen Kaige, Tsui Hark and Dante Lam directs. Top Chinese action star Wu Jing and singer Jackson Yee star, with a staggering 70,000 People's Liberation Army soldiers as extras. Set during the 1950-1953 Korean war, the film is a dramatization of a key battle between Chinese soldiers and American forces. The film is controversial for what some have deemed historical inaccuracies: it was banned in Malaysia and attracted backlash in South Korea, where the film was deemed revisionist history. Despite this, it has become the highest-grossing Chinese movie of all time, overtaking Wolf Warrior 2 (also starring Wu). A sequel tentatively titled Water Gate Bridge is in production. This would have been the second year in a row that a Chinese film would have topped the box office, after 2020’s The Eight Hundred, if not for… 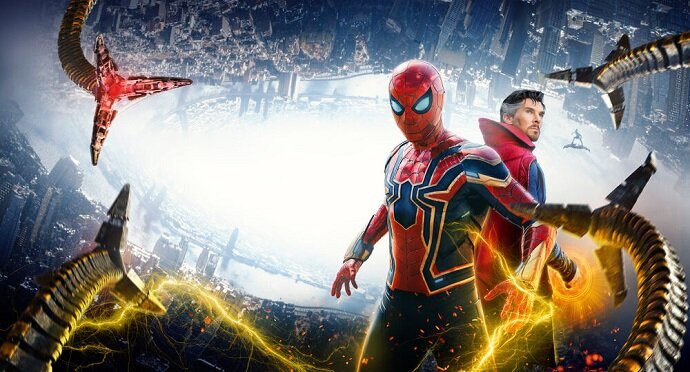 The third instalment in the MCU Spider-Man trilogy starring Tom Holland as Peter Parker/Spider-Man is a bona fide hit, attracting audiences in droves even amidst the Omicron variant of COVID-19 surging. Far outgrossing other MCU entries Black Widow, Shang-Chi and Eternals, No Way Home is the highest-grossing movie released during the pandemic yet. It’s easy to see why the film is so popular: it builds upon nostalgia for earlier Spider-Man films, marking the return of characters like Otto Octavius/Doc Ock (Alfred Molina), Norman Osborn/Green Goblin (Willem Dafoe) and Max Dillon/Electro (Jamie Foxx). Fuelled by nostalgia for the storied Spider-Man movie franchise, the movie has elicited a strong emotional response. A series of leaks and an ever-churning rumour mill ensured that audiences would rush out to catch the movie before they could be spoiled on social media, something that had been happening even before the movie’s release. While it seemed like this might have been Holland’s last outing as the web-slinging hero, it has been announced that he will return to the role, with a planned new trilogy in the works.