Ana Marks, Get Set, Go: A Look at the Life and Career of Ana De Armas 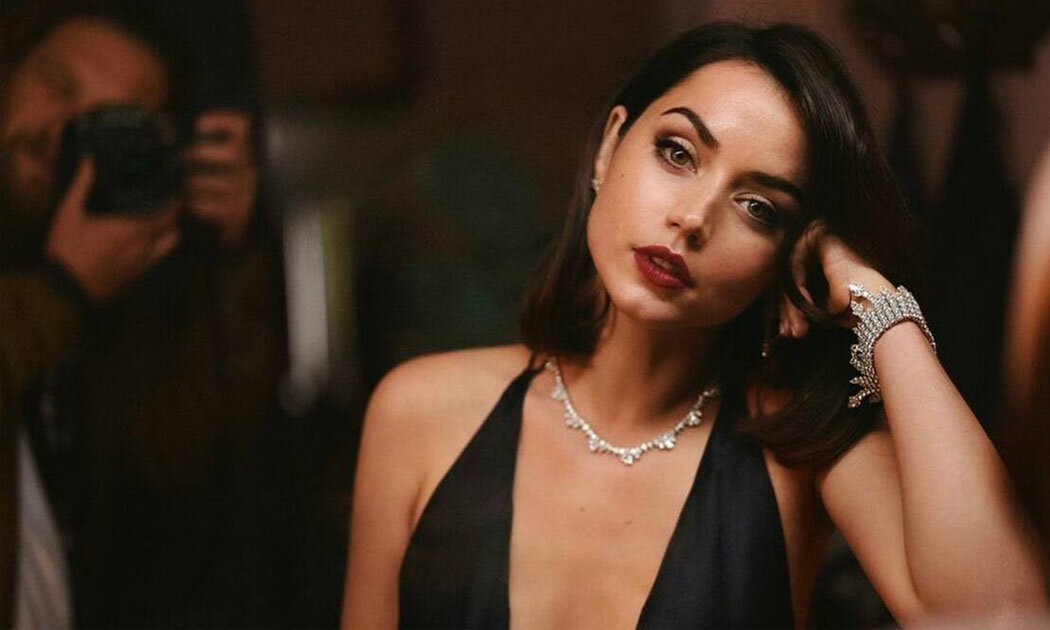 Being a Bond girl is a big deal. Sure, there are certain stereotypes associated with the part, but what it means to be a Bond girl has evolved over the decades. The Bond girl pantheon includes such actresses as Ursula Andress, Honor Blackman, Diana Rigg, Michelle Yeoh, Halle Berry, Eva Green and Monica Bellucci. In No Time to Die, Ana de Armas joins the ranks.

The oft-delayed film, which had a fraught production involving multiple changes in director and accidents during filming, is finally coming out. No time like the present, after all. While de Armas is not the lead Bond girl (Léa Seydoux returns from Spectre, with Lashana Lynch playing an MI6, the agent rumoured to have taken over the 007 designation from a retired Bond), the role was created specifically for her. De Armas plays Paloma, a Cuban American CIA agent. The character is integral to Bond’s mission, but also a somewhat comedic figure. “Her character is someone who’s just started working for the CIA, and so she’s supposed to have minimal training when she first meets Bond,” veteran Bond producer Barbara Broccoli said. “The expectation is that she’s not going to be the most proficient agent, but let’s just say that she really packs a punch.”

At 33, Ana de Armas already has a list of impressive credits under her belt, making the leap from Cuban and Spanish productions to Hollywood. She was born in Havana and raised in the small town of Santa Cruz de Norte. At age 14, de Armas enrolled in the National Theatre School of Cuba, hitchhiking to attend classes. She scored roles in the movies Una rosa de Francia and Madrigal and at 18, de Armas moved to Spain with the help of her maternal grandparents.

De Armas’ big break was the Spanish teen drama thriller El Internado (The Boarding School), which ran for seven seasons and became a sensation in Spain and other Spanish-speaking countries. De Armas eventually felt she outgrew the role, being 22 and playing a 16-year-old. After acting in several Spanish films, de Armas’ first Hollywood project was a Spanish-speaking part in the 2016 sports biopic Hands of Stone as Felicidad Iglesias, Panamanian boxer Roberto Duran’s (Edgar Ramírez) wife. While other Hollywood films de Armas made would be released first, Hands of Stone was the first one she worked on. Director Jonathan Jakubowicz invited de Armas to audition after watching El Internado while he was in Spain. “If it wasn’t for Felicidad, [Duran] would be lost,” Ramírez said of the boxer’s wife. The real-life Duran and Felicidad were childhood sweethearts and have been married for over 40 years.

Filmed after Hands of Stone but released before it was the 2015 horror thriller Knock Knock, directed by Eli Roth and starring Keanu Reeves. De Armas and Lorenza Izzo played two mysterious, sinister women who torment Reeves’ character. A role in a horror flick some might consider trashy and lurid is almost a rite of passage for many actresses who go on to be big stars. De Armas, who did not yet speak English, learned all her lines phonetically. De Armas would continue to appear in movies like 2016’s comedy-drama War Dogs and 2017’s actioner Overdrive, with critics often noting that she was underused and given too little to do in these movies. “It was a good exercise for my ego,” de Armas told The Independent about moving to Hollywood. “After having a career in Spain for eight years, I went back to being anonymous again, having to prove myself to the industry and myself, to prove I was capable of acting in a different language. It was a good challenge and I can’t complain.” She noted that even American actresses would struggle to get roles, let alone a Latina actress who did not speak English. De Armas spent four months taking English classes, which could last up to seven hours a day.

In 2017, Blade Runner 2049 gave de Armas what was arguably her breakout Hollywood role. In the long-awaited sequel to the modern classic sci-fi noir, she played Joi, the holographic artificial girlfriend to protagonist K (Ryan Gosling). De Armas was effusive about director Denis Villeneuve (who also directed the new film adaptation of Dune), telling The Hollywood Reporter that “Working with Denis was a gift” and that it was “beyond a dream”. De Armas said she “adored the whole experience of how things went,” also crediting Gosling for being easy to work with. While the film was critically acclaimed, it underperformed at the box office, meaning de Armas’ Hollywood career did not skyrocket immediately. In 2019, de Armas appeared in the crime thriller The Informer and the historical spy movie Wasp Network, the latter being based on the true story of Cuban spies in American-controlled territory in the 90s, taking her back to her roots.

Also in 2019, Rian Johnson’s Knives Out was released. The comedy mystery featured an all-star ensemble cast including such actors as Daniel Craig, Christopher Plummer, Chris Evans, Toni Collette, Jamie Lee Curtis, Don Johnson and Michael Shannon, but critics agreed that de Armas stole the show and was the heart of the movie. She played Marta Cabrera, the nurse of elderly crime novelist Harlan Thrombey (Plummer), whose murder is the catalyst for the film’s whodunit.

Given the positive attention de Armas received for the part, it is mind-boggling to think that she almost passed on it. The character description she received was “pretty Latina caretaker,” with other details omitted to maintain secrecy on the production. “Because of the character description, my imagination immediately went to a portrayal that was not necessarily very positive or exciting in relation to Latin culture,” de Armas told The Hollywood Reporter. “So, when I finally read the script, I realised that the description didn’t fit at all because Marta is so much more than that.”

“There are a lot of Latina characters represented in a very small-minded and basic and cliché type of way that I try to get away from,” de Armas told Vanity Fair. “And Rian gave me a whole universe.”

“It was a dream. These characters don’t exist,” de Armas told Time about Marta. “Especially in this type of setup: a wealthy family played by all of these big movie stars, and then you have a Latina - the last thing you would imagine is that the movie is about her.” De Armas reunites with her Knives Out co-star Craig on No Time to Die. “I should always be so lucky to work with a woman like that,” Craig told Vanity Fair. “She’s got very good comic timing and we’re not offering her a huge part. But she came in and just nailed it,” he continued. Acknowledging the tumultuous production, Craig remarked, “She had very little to go on, the scripts are being rewritten, you’re changing things all the time or throwing them at her, and she’s not fazed by it.” The challenge of playing a silver screen icon is one de Armas will tackle in Blonde, adapted from Joyce Carol Oates’ historical novel. In the film directed by Andrew Dominik, de Armas will play Marilyn Monroe. “I only had to audition for Marilyn once and Andrew said, ‘It’s you,’ but I had to audition for everyone else. The producers. The money people. I always have people I needed to convince. But I knew I could do it,” de Armas told Vanity Fair, alluding to the determination that has played a big role in her success. “Playing Marilyn was ground-breaking. A Cuban playing Marilyn Monroe. I wanted it so badly.”

De Armas has gained her Knives Out co-star Jamie Lee Curtis’ seal of approval – Curtis’ father Tony starred alongside Monroe in Some Like It Hot. “I remember when she showed me a video of her screen tests for Blonde, I dropped to the floor,” Curtis told Vanity Fair. “I couldn’t believe it. Ana was completely gone. She was Marilyn.” Overcoming various challenges to find herself becoming one of Hollywood’s most sought-after actresses, Ana de Armas has come a long way from hitchhiking to theatre school. “It’s important not to compromise your work and ideas for the industry and what some might be expecting you to do or recommending you to follow,” she told Harper’s Bazaar. “It’s about being smart and patient and staying true to your path. The roles are there, but you need to find and fight for them.”