Warner wowed DC fans by showcasing footage of Zack Snyder's Justice League. The toughest critics have been blown away by just how good the teaser trailer is, even though Batman v Superman: Dawn of Justice failed to capture hearts. The all-star superhero cast includes Ben Affleck as Batman, Gal Gadot as Wonder Woman, Ezra Miller as The Flash, Jason Momoa as Aquaman, Ray Fisher as Cyborg, and Henry Cavill returning as Superman. Ben Affleck, who is directing and starring in the studio's next Batman film and co-starring in Justice League, charmed fans by pulling out his phone to take a picture of the massive crowd. "I've never done this before. It’s kind of nerdy," he said before snapping the pic. "It’s just not going to happen again. It’s kind of a cool moment for me."

In the footage, Bruce Wayne/Batman is shown putting the group together, and meeting Aquaman and The Flash for the first time. Much like “assembling,” in The Avengers, it’s exciting to see the Justice League joining forces.

Fans were also rewarded with the full-length trailer of Wonder Woman, which introduces us to Princess Diana of Themyscira. In it, her infamous lasso of truth makes its appearance as she fights for peace during the first world war alongside Steve Trevor (Chris Pine) The film is directed by Patty Jenkins (Monster), and Gadot, when speaking to Entertainment Weekly, said that having a woman behind the camera for the project was key. “It’s a story about a girl becoming a woman. I think only a woman, who has been a girl can be able to tell the story in the right way,” she said. 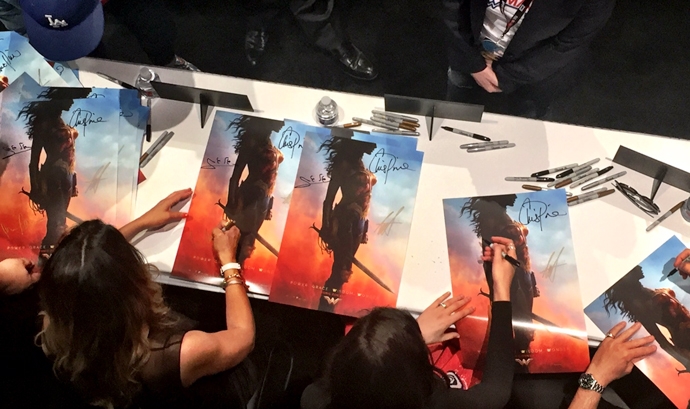 One line got the biggest applause from the trailer — when Wonder Woman meets Steve Trevor's secretary, Etta Candy (Lucy Davis), prompting her to ask, "What is a secretary?"