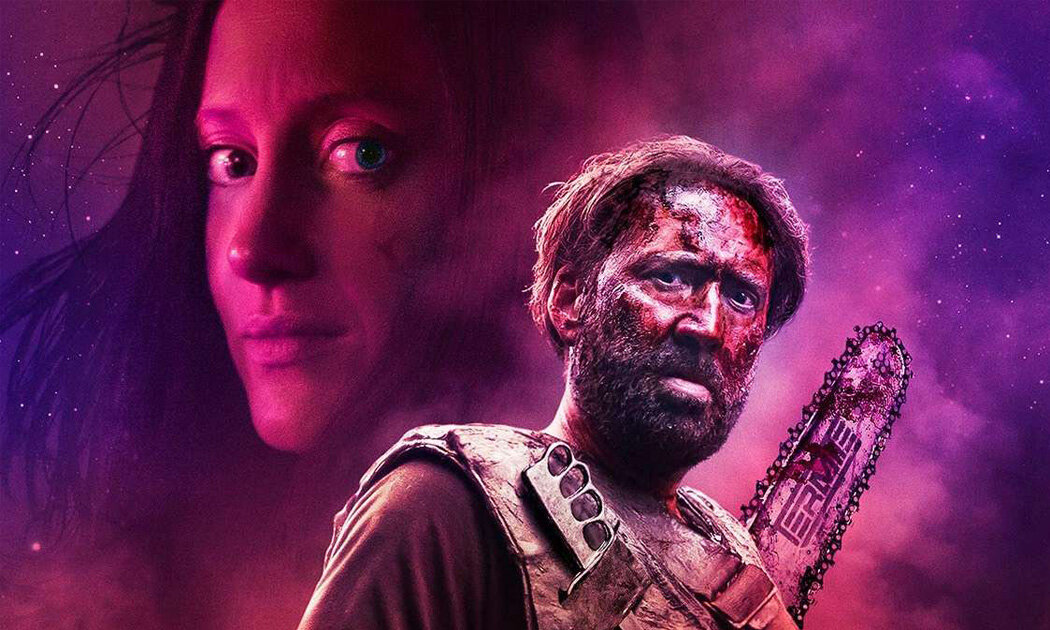 Once in a while, the perfect storm gathers to create the ideal cult movie: something that is as weird as it is mesmerising, something at once novel and classic, something that features a magnetic performance or two – all the ingredients to make a movie that cool genre aficionados will endlessly enthuse about. Panos Cosmatos’ 2018 arthouse horror thriller Mandy checks all of these boxes and then some.

The film stars Nicolas Cage as Red Miller, who lives a blissful life with his artist girlfriend Mandy Bloom (Andrea Riseborough) near the Shadow Mountains in California’s Mojave Desert. After Mandy is kidnapped by an occultic biker gang led by the demented Jeremiah Sand (Linus Roache), Red transforms into a one-man army who carves out a bloody path of vengeance.

Following its premiere at Sundance Film Festival in January 2018, Mandy became the most buzzed-about genre movie of the season. It received critical acclaim, winning Best Independent Feature at the Saturn Awards, presented annually by the Academy of Science Fiction, Fantasy, and Horror Films.

Here are five reasons to take the plunge and go on the wild ride that is Mandy.

Nicolas Cage has a reputation as the king of weird. His exaggerated mannerisms and facial expressions and his penchant for offbeat films have made him a favourite among cinephiles: some mock him, others respect him as a genuinely talented actor, and often it’s a mix of both sentiments. The main image associated with this film is that of a bearded, wild-eyed Cage covered in blood, and that gives you a good sense of what you’re in store for. It’s no surprise that Cage was initially sought to play the antagonist Jeremiah Sand.

This is a great Cage performance because he brings genuine intensity and sorrow to the role, in addition to the expected zaniness. “I actually think Red is one of my more subtle portrayals,” Cage said in an interview with Slashfilm. “I was going more from the emotional content. Trying to go into the well of memory and conjure up something more along those lines, as opposed to some sort of stylisation, which I have been known to do in the past.” There is plenty in this performance for audiences to connect to, which is different from some films which viewers watch solely to see Cage freak out and do his thing. Mandy is the best of both Cage worlds.

Mandy is a film that is obsessively designed, with many frames looking like something you might see on a museum wall. The film’s psychedelic sensibilities are equally disturbing and entrancing. Hints of this style are evident in director Cosmatos’ earlier film Beyond the Black Rainbow but are much more pronounced and explosive here. The marriage of beautiful imagery and ultraviolence is part of the movie’s peculiar appeal, drawing viewers in as it sets them on edge. “To me, the… violent imagery in this film was a core aspect of it,” Cosmatos said in an interview with The Hollywood Reporter. “It has to feel primal and kind of like a barbarian film from the '80s. Like the way I felt when I watched Conan the Barbarian when I was a kid — it was f***ing terrifying and kind of a savage, primal, dark world, you know?”

#3: IT HAS AN EPIC CHAINSAW FIGHT 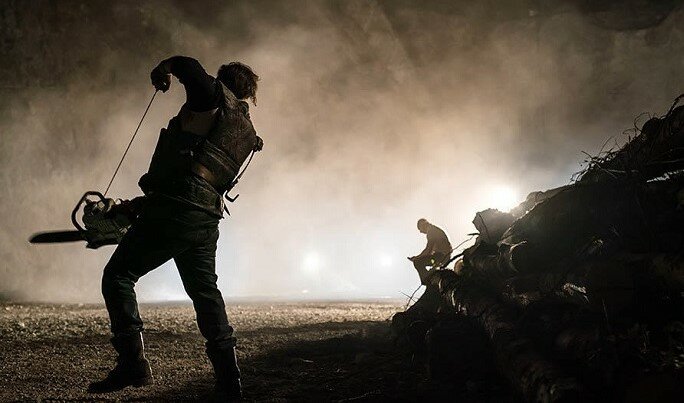 Mandy is a slow burn and has long, torturous sequences that are uncomfortable to watch, but when it lets loose in its third act, it really lets loose. One of the movie’s most memorable moments is a battle between Red and the bikers, fought using chainsaws. “I think maybe one of the first things that I realized I wanted done was probably the chainsaw fight,” Cosmatos told Slashfilm. “Usually chainsaw fights are sort of cumbersome feeling using heavy machines, but I wanted to try to keep that but also give it a more, sort of barbarian and sword fight kind of feeling.” The very idea of a duel that substitutes chainsaws for swords is ludicrous, but by this point in the movie, Mandy has earned its audiences’ suspension of disbelief, and nothing less than a chainsaw fight will do.

#4: IT HAS METICULOUS WORLD-BUILDING Mandy rises above the typical horror-slasher crowd with specific textural eccentricities that do not seem like affectations, but rather are hardwired into its DNA. The movie is set in an alternate version of 1983. “To me, ‘1983’ is a name for this sort of landscape of my childhood memories and my emotions of the time and I’m coping with them now,” Cosmatos, whose father was the late Rambo: First Blood Part II director George P. Cosmatos, told Roger Ebert.com. “It’s this mythological landscape that is inspired by that, by my mind of that time.”

Mandy includes the now-iconic TV commercial for fictional instant mac and cheese brand Cheddar Goblin, styled after the chintzy food advertising prevalent in the 80s. Special effects artist Shane Morton and Casper Kelly, director of Adult Swim’s viral video Too Many Cooks, created the TV commercial featuring the Cheddar Goblin mascot. Another such element is Jeremiah Sand’s music – the cult leader is, like real-life cult leader Charles Manson, a failed musician. The song “Amulet of the Weeping Maze” was released as a vinyl single, as if it were a real song. The B-side is Sand’s monologue recounting his past.

#5: IT FEATURES THE FINAL FILM SCORE OF JÓHANN JÓHANNSSON 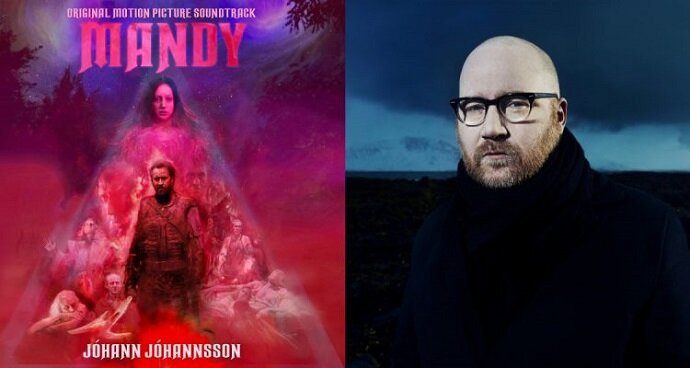 The twice Oscar-nominated Jóhann Jóhannsson is one of the most-lauded film composers in recent years, having scored films including Prisoners, Sicario, The Theory of Everything, and Arrival. One month before his death in February 2018, Jóhann submitted his score for Mandy. The industrial metal-tinged score is deliberately evocative of rock operas, with Cosmatos likening the audio-visual experience of Mandy to Tommy, Ken Russell’s seminal film adaptation of The Who’s concept album of the same name. “Among the few touchstones I gave him, as an inspirational starting point, were the Queen soundtrack for Flash Gordon, and the Van Halen album Fair Warning,” Cosmatos elaborated in an interview with Variety. “He really understood the tone I wanted to achieve, the kinds of textures I wanted,” Cosmatos said of the composer. The director initially thought that they would not able to get a prestigious composer like Jóhann on board, but Jóhann told Cosmatos that he grew up as a metalhead and was also a fan of Beyond the Black Rainbow. The film is dedicated to Jóhann’s memory. 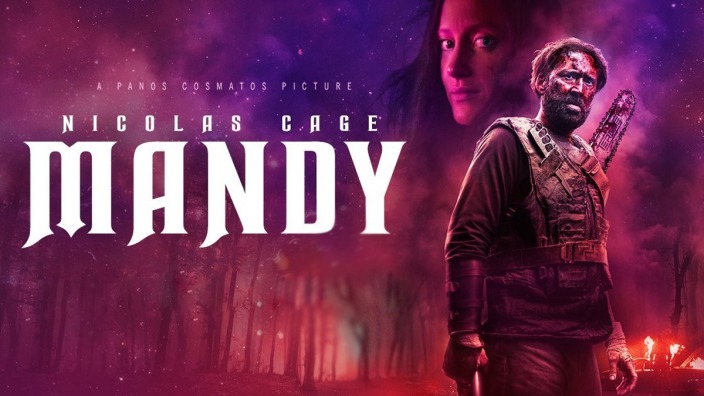