Abominable: Kids (and Parents), an Exciting Yeti Adventure Awaits You! Abominable is a family-friendly animation with visually-arresting oriental-style imagery that you will enjoy together with your younglings. Apart from its heartwarming story that imparts values of personal responsibility, care for others, and never giving up in the face of adversity, the characters are also very relatable, not least because they are Asian.

The main protagonist, Yi, is a Chinese girl who lives with her mother and grandmother in a Chinese city. She does not have many friends, and prefers to work odd jobs to earn pocket money. Having Asian characters is not new, but there is a special intent for this movie to try to reach out to more Asian audiences with familiar Hollywood-style animation. While some might argue that some of the decisions made pander to the West’s impressions of Eastern culture and values, which is no more than cultural tokenism, such as shots of the Great Buddha in the mountains, or the eating of baos (Chinese buns), etc., it is not really an issue because this is a movie made for the widest possible audience and has no pretensions of being condescending.

In fact, the film was produced and animated by Pearl Studio, a Chinese company formerly known as Oriental DreamWorks, which first produced Kung Fu Panda 3 back in 2016. (Abominable is their first original animated feature). This is also a good opportunity to teach your child about international co-productions, that some movies are not just made by Hollywood in the US of A; they are made elsewhere, but more importantly, they try to tell stories from other parts of the world so as to resonate with audiences from different cultures. 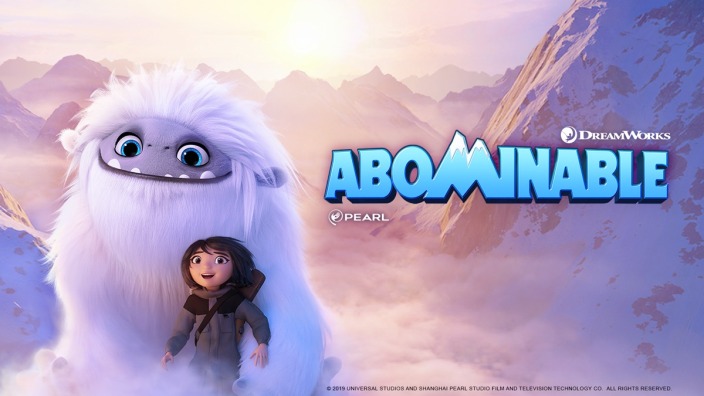 You must have seen cartoons all your life on your phone and television (or do you not watch TV anymore?). I’m also sure you must have seen at least one animated movie in the cinema with your parents (or your friends) last year.

Do you remember any of these: Frozen II, Toy Story 4, How to Train Your Dragon: The Hidden World, The Angry Birds Movie 2, The Lego Movie 2: The Second Part, The Secret Life of Pets 2?

Perhaps you do, because these movies are sequels where their ‘brands’ are already well-known. But have you heard of Abominable? It played in cinemas a couple of months ago, but if you somehow missed it, you will now be able to watch it here on CATCHPLAY+!

The word ‘abominable’ means awful or horrible (that is, according to the thesaurus), but there is nothing terrible or terrifying about this animation. In fact, you will find the movie to be great fun and exciting. There is a Yeti in it, a white, mythical creature from the Himalayas, where the tallest mountain in the world resides. He is also known as the Abominable Snowman, but does he really deserve that nickname?

Humans are actually the abominable ones here; in fact, at the start of the movie, the Yeti is already captured by a wealthy old man who wants to show the world his new ‘discovery’. The Yeti escapes (if only barely), and is fortunate to come into contact with a rebellious teenage girl, Yi, who is shocked but tries to hide him.

That is how the story begins, and with Yi sensing that the Yeti is lost and wants to return home (to Mount Everest, duh!), she does all she can to protect the creature from the authorities in an adventure she didn’t ask for, but must now complete for the sake of her new, furry friend. Abominable is a straightforward story that is easy to digest. It is also fascinating to see what kind of magical powers the Yeti might possess that could help Yi and her two friends in the journey. One of the beautiful things about the movie is Yi playing the violin, for herself, for the Yeti, for everyone. The violin was given to her by her late father, and she uses music to help cope with the loss and connect more emotionally with the Yeti.

If you love adventures that are exciting, funny and magical, with a huge, fluffy creature at the centre of attention, then Abominable is the movie for you!