Zombieland Double Tap - The Gang is Back with New Blood

Released in 2009, Zombieland was the sleeper hit of that year. Starring Woody Harrelson, Jesse Eisenberg, Emma Stone, and Abigail Breslin as survivors of a zombie apocalypse caused by a strain of mad cow disease, Zombieland was partly a pop-culture infused take on the zombie genre, a commentary on the droll emptiness of suburban life, wrapped in a sweet "win the girl" story. A sequel rarely gets made ten years later. But the crew finally has a good story, and the cast is all back to shoot some zombies. So, let's catch up with everything that's happened, and prepare for what's about to go down. 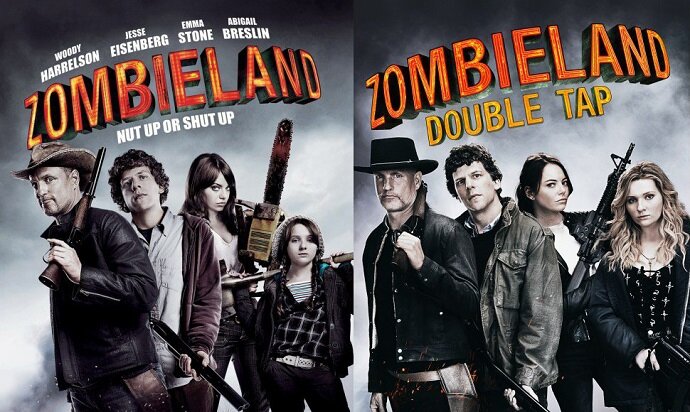 Since the last movie, pretty much everyone's gone on to do some pretty marvellous things.

Jesse Eisenberg: Played Mark Zuckerberg in the generational defining The Social Network, and got robbed at the Oscars. Played a magician of all things in two Now you See Me movies. Then, he became a supervillain portraying Lex Luthor in Batman v Superman: Dawn of Justice.

Emma Stone: Broke out a year later with Easy A. Had an astounding 2011 with Crazy, Stupid, Love and The Help. Then, she played Gwen Stacy twice in two meh Amazing Spider-Man films. She also made herself a regular at the Academy Awards, picking up nominations for Birdman, La La Land, and The Favourite, winning Best Actress for La La Land.

Woody Harrelson: Woody stayed busy as ever. Most viewers will remember Haymitch Abernathy from The Hunger Games film series. Harrelson also joined Eisenberg in the Now You See Me movies as Merritt McKinney. Other credits include War for the Planet of the Apes, Three Billboards Outside Ebbing, Missouri, and Solo: A Star Wars Story.

Abigail Breslin: The youngest of the cast has kept up a steady pace of work, including Rango, New Year's Eve, The Call, August: Osage County, and Ender's Game. Her most prominent credit was TV's Scream Queens, which ran for two seasons from 2015 to 2016.

It's worth noting that the movie won't be picking up where they left off. Instead, ten years will have also passed in the reel world, so expect some character development. At least they avoided President Trump in that timeline. Avan Jogia is Berkeley, who plays somewhat of a critical role in the movie. He's a hippie-looking hitchhiker whom Little Rock picks up and decides to drive off with. So, the rest of the gang decide to set off and find her.

There's also Rosario Dawson as Nevada, who seems to be a badass who goes toe to toe with Tallahassee. Zoey Deutch plays Madison, who appears to be a new love interest or diversion for Columbus.

Finally, there's Luke Wilson and Thomas Middleditch as Albuquerque and Flagstaff, a pair who seems to be personality clones of Tallahassee and Columbus. One of the highlights of the first movie was absolutely Bill Murray's cameo. He plays a fictionalised version of himself who still lives in LA and dons zombie makeup to blend in with the undead. Murray meets his end when he's goaded by Tallassee and Wichita to prank Columbus. Unfortunately, Columbus to shoot him in the chest as he mistakes him for a real zombie.

Director Ruben Fleischer has teased a Bill Murray return. "I share that love of Bill Murray in the first one," In a recent interview with Total Film, he said: "I don't know how you could ever top that, but if someone were to stay to the finish of the film, perhaps they might see something a little special..."