★ In celebration of National Day, enter promo code SGND19 to enjoy any one film for S$1 only! ★

It’s already the nation’s 54th birthday, and so far 2019 has been shaping up to be an interesting year for Singapore cinema in terms of genres, styles and thematic preoccupations. It may be a bit more muted this year as there hasn’t really been a high-profile film to make waves at the international festival circuit so far, but that doesn’t mean this is a stagnating year for our local indie cinema. In fact, the converse is true. While we celebrate Singapore’s birthday, let us also rejoice at some of the films—both features and shorts—that were produced this year by both veteran and emerging filmmakers working in various mediums, including animation and documentary.

Shorts still don’t really attract the larger public here in Singapore, but we can hope things will change because many short films are made each year, from graduating students of film schools to established voices, and they often capture hot-button issues, or a nation in continuous flux, in no longer than an episode of ‘Friends’.  Here are two fascinating ones you can see later this year: 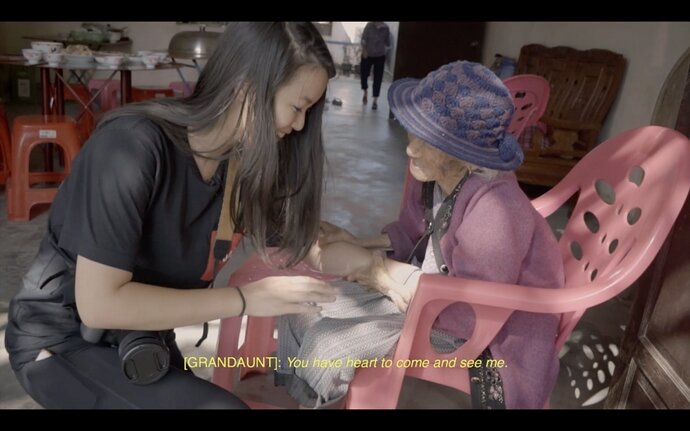 This is an outstanding short from a team of graduating students from the Wee Kim Wee School of Communication and Information’s Class of 2019. As the question of Chinese identity becomes more fractious in the larger political context of the Chinese diaspora, Two Islands—its title so innocuous yet provocative at the same time—is a timely reminder on what it means to be Chinese, and to belong to an ‘extended family’.  It is very beautifully shot in Hainan and a heartwarming experience.

* The short will play at the Singapore Shorts ’19 at the Oldham Theatre on Sun 11 Aug, 4pm. You might have heard of an animated short that premiered at the Cannes Directors’ Fortnight about a Lamb Chop trying to make ends meet. Yes, this is the one. A surreal tale based on a short story by Eric Khoo (penned even before he made 1995’s Mee Pok Man), Piece of Meat sees producer Huang Junxiang (of such films as Ramen Teh and Buffalo Boys) and the versatile animation director Jerrold Chong combine as co-directors to experiment on a cut-out approach to animating, giving us a work of flavourful imagination and aesthetical abstraction.

• The short will premiere in Singapore later this year, but in the meantime, you can savour some exclusive excerpts as well as a full retrospective of Jerrold’s fascinating filmography at LumiNation ‘19 at The Arts House on Sat 17 Aug, 2pm.

Here are two feature films that might work as a quaint double-bill, with both exploring our historical and cultural vestiges in unique ways. You might remember 2015’s The Songs We Sang, one of the best Singapore documentaries ever made, about the xinyao music movement. Here is director Eva Tang’s follow-up, which centres on another part of Singapore’s history, in the form of a school’s legacy. Through the moving story of St. Nicholas Girls’ School’s formative years, we witness how her early educators’ steadfast commitment to education helped generations of students to succeed amidst the political activism of the 1950s and major educational reforms in the 1970s. Alternating with effortless ease between crisply-shot period drama and traditional documentary approach, Tang’s work is engaging, insightful and accessible even for mainstream moviegoers. It has been quite a while—a long time actually—since we have had a ‘Pontianak’-type movie hitting the big screen. But from 29 Aug this year, the Singapore-Malaysian co-production, Revenge of the Pontianak, will hit the cinemas and should whet the appetite of Singaporeans looking for a modern take on the folkloric horror icon from the region. Co-directed by Glen Goei (who gave us 1998’s Forever Fever and 2009’s The Blue Mansion) and Gavin Yap, the film is strikingly set in Malaysia in 1965 (according to the official synopsis), but whether there is any veiled allusion to Singapore’s independence remains to be said. In any case, the recently-launched trailer promises an all-out genre piece, but can it make a splash at the box-office? We can only find out in time to come.

• The Singapore Film Society will be organising a special screening of the film with post-screening Q&A with selected filmmakers on Wed 11 Sep, 9pm, GV Paya Lebar.