Avengers Endgame: The Self-Q&A AKA Things You Should Know Before Watching It’s almost here. The 22nd Marvel Cinematic Universe movie, and the culmination of Phases 1 to 3 (now known as The Infinity Saga) is almost here. If you’re a casual viewer (unlike me), you may need to catch up on a few things. Luckily for you, I’m going to impersonate you and have a conversation with myself to help you catch up to speed.

Me Who Doesn’t Know Anything (MWDKA): Uh, so who’s dead? Who’s alive?

Me: With exactly one month left to go, Marvel dropped a bunch of character posters. As you can probably see, the greyed out ones are all confirmed to be dead, while the ones in colour are still alive. There’s a bunch of surprising dead/alive revelations. Let’s roll through them quickly. Of this group, Iron Man and Nebula are still stuck in space on Titan. Ant-Man’s stuck in the Quantum Realm. Dead due to Thanos murdering them: Loki, Gamora, Vision

Shuri was previously thought to be alive, until the first trailer for Endgame was released. One of the monitors’ screen had Shuri’s face and a large “MISSING” tag underneath it, so this confirms that T’Challa’s sister is indeed dust due to Thanos’ snap. M’Baku is likely Wakanda’s king now. Eric Selvig, Jane Foster’s colleague and the professor Thor would knock beers down with, has also been confirmed to be dead. MWDKA: What’s the deal with Ant-Man?

Me: First of all, if you watched Ant-Man and The Wasp and didn’t stay for the mid-credits scene like you should for every Marvel Studios movie… shame on you. In that scene, Scott Lang goes back into the Quantum Realm to harvest quantum energy to help Ava (Ghost) remain stable. He does this using his buddy Luis’ van, which now has Hank Pym’s Quantum Tunnel installed in the back of it. Unfortunately for Lang, Hank, Hope, and Janet disintegrate into dust while he’s in the realm, leaving him stranded in the Quantum Realm.

MWDKA: So why is Ant-Man in the trailers so much? How does he get out of the realm?

Me: Uh. I haven’t seen the movie. I wouldn’t know. However, it has to be noted that in Ant-Man, Scott Lang did manage to reverse Yellowjacket/Darren Cross’ sabotage of his suit that caused him to shrink uncontrollably, and return back to the normal world. Chances are, he’ll be able to find his way out of the realm using his street-smarts again. As for why he’s so prominent… Marvel Studios honcho has been hinting at the importance of the Quantum Realm for a while now. Don’t be surprised if it plays a big part in undoing the damage Thanos has caused. MWDKA: Gamora talking to Thanos at the end of Infinity War… what was that about?

Me: In the comics version of the story called “Infinity Gauntlet”, the Soul Stone contains an entire pocket dimension — a self-contained place known as the Soul World. All the folks who were killed by the Soul Stone aren’t totally dead; their spirits wind up in the Soul World, inside the stone, and they’re stuck there. In director commentary in the home video release of “Infinity War,” it was confirmed that that orange looking place where a young Gamora speaks to Thanos post-snap is indeed the Soul World.

MWDKA: What’s with Hawkeye and the girl he’s training the bow and arrow with?

Me: Again, I’m not the director of the film, but it’s likely a flashback to Hawkeye and his daughter (seen in Age Of Ultron) in happier times. Most people are assuming his family perished with the snap, causing Hawkeye to adopt his Ronin - a vengeful samurai persona. It could also be Kate Bishop, a young avenger who picks up the mantle while Hawkeye was assumed to be dead/off being Ronin (it’s comics… it gets complicated.) Me: I’m sure it’s just her blonde dye and roots dying out. The movie is supposed 3 hours 58 seconds long, so expect a lot of time to pass by in the movie.

Oddly enough, it’s Natasha’s follicle changes that give us some sense of time where those sense take place. In the latest Special Look clip, Carol, Rocket, Rhodey, Nat, Steve, and Thor are in the Guardians’ ship, the Benatar. Tony and Nebula aren’t with them so we assume they haven’t figured out a way to get back to Earth yet, and the rest of the team might just be on the way to rescue them. Nat’s still rocking the Infinity War blonde look in that scene, so that figures to be early in the movie.

In the scenes we’ve seen so far of Nat and Clint’s reunion in Tokyo, Nat has the two-tone red and blonde hair going on. Again, nothing’s 100% but we can probably assume that Nat goes to fetch Clint after they retrieve Tony and Nebula. 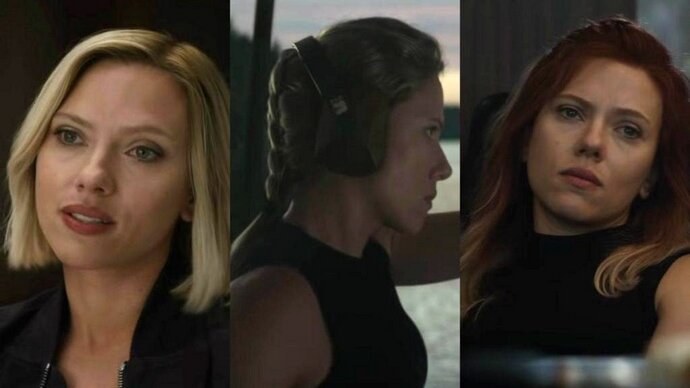 Me: It’s likely they’re going into the Quantum Realm. Notice in the new Special Look clip that the team is aboard the Benatar without those suits on. Or maybe I’m just talking nonsense and you don’t need any good reasons for new suits other than MERCHANDISING.

MWDKA: What’s this about Captain Marvel and time travel?

Me: It was just something Samuel L. Jackson made up while bored doing press for Captain Marvel. I’d be stunned if this entire saga wrapped up with a time travel trick… Superman II fly so fast around the Earth that its rotation and time reverses anyone?