Winona Ryder and Keanu Reeves: Why They Make the Perfect Couple Ryder began her career as a child star, starring in her first movie alongside famous 80s names like Charlie Sheen and the late Corey Haim in Lucas in 1986. She went on to appear in iconic films such as Beetlejuice (1988), Heathers (1988), Little Women (1994) and more. Her career stalled since the early 2000s since an unfortunate shoplifting incident, but she’s been slowly making a welcome comeback. Reeves, whose first name means "cool breeze over the mountains" in Hawaiian, started his acting career right about the same time as Ryder. It was the 1989 film the goofy Bill & Ted’s Excellent Adventure, about a pair of teens on a quest to prepare the ultimate historical presentation with the help of a time machine, that got him noticed. With lines like “dude” and “excellent, man” in a lazy drawl, it’s hard to imagine the Reeves then would be the super-cool Neo in the Matrix franchise and the sleek assassin, John Wick. Unlike Ryder, Reeves’ popularity never waned. The pair star in Destination Wedding, a romantic comedy about two strangers heading to a destination wedding. They get on each other’s nerves initially only to be kindred spirits as they both share a distaste for the wedding. The duo’s chemistry is electrifying and makes this rom-com more than just a light-hearted comedy. And it makes us root for them, not just in reel life, but in real life too. Here’s why Winona Ryder and Keanu Reeves make the perfect couple.

1. They’ve Appeared In 3 Movies Together Previously Destination Wedding isn’t the first movie that they’ve starred in together. Their first collaboration was in the 1992 Bram Stoker’s Dracula, where they portray a pair of lovers whom Dracula (Gary Oldman) tries to break apart. They reunited in the 2004 A Scanner Darkly, and played characters in the animated movie about the dystopian future where an undercover cop (Reeves) is questioned on his involvement in drugs. Their third collaboration was in The Private Lives of Pippa Lee (2009), about a woman undergoing a nervous breakdown and starts reflecting on her life. Destination Wedding is actually their fourth movie together. Ryder read the script and thought Reeves would be perfect for the part, and emailed him. Reeves was only too glad to collaborate with her. Although they both started acting in the mid-80s, it’s the 90s that they both made their mark. As Jo March in the remake of Little Women (1994) and Susanna in Girl, Interrupted (1999), Ryder’s range and talent was a force to be reckoned with. It was Ryder’s role as Lelaina Pierce in Reality Bites (1994), a movie that captures the spirit of the 90s, that her It girl of the 90s was inked. While Bill and Ted put Reeves on the radar, it was the 1991 Point Break, opposite the late Patrick Swayze, that people sit up and took notice. He followed that success with Speed (1994), which sealed his heartthrob status. As the hotshot cop Jack Traven who needs to stop a bus from blowing up by keeping it at a speed above 50 MPH, Reeves became a bona fide star. Towards the end of the decade, Reeves starred in the first of the Matrix movies, a revolutionary cinematic masterpiece that got all of us imitating his iconic “woah”. Safe to say, the 90s have been a turning point for both, vaulting them from actors to stars. There’s no denying that Reeves still look good at the grand old age of 56. He can still kick ass and be the leading man in a romantic comedy. In fact, Reeves ages like fine wine, the older he is, the better he looks. Ryder, at 49, isn’t too shabby either. She still maintains that youthfulness and that wide-eyed innocence. We’d like to know where they discovered the fountain of youth. 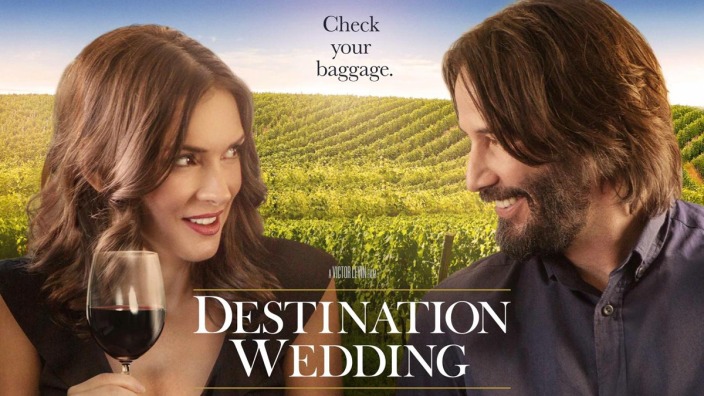 Their chemistry is palpable. When they play a couple on-screen in Dracula, you’d believe them. And it doesn’t just happen on-screen. Ryder has shared that throughout the years, Reeves and she would meet once a year to catch up for dinner. On top of that, they also write letters to each other, which Ryder welcomes. And it's precisely this chemistry that drove Ryder to approach Reeves for Destination Wedding. She needed someone she has a good rapport with because they are the only two characters with lines in the film. The whole movie was shot in nine days, and there were long scenes where it was just the both of them talking. Had it been some other pairing, the chemistry and comedy might not be as enjoyable. It was Ryder who first revealed in the recent press interviews for Destination Wedding that Reeves and she might be married in real life! While the pair were filming a wedding scene in Dracula, director Francis Ford Coppola brought in an actual Romanian Priest to officiate the ceremony for realism. This means the pair could be married for the past 26 years! And that’s a union we welcome.