Couples We're Dying to See Starring on Screen Together In the upcoming horror A Quiet Place, we see husband and wife team John Krasinski and Emily Blunt work together in a horror thriller, where a family must navigate their lives in silence to avoid mysterious creatures that hunt by sound. If they can hear you, you’re as good as dead. Krasinski and Blunt resisted working together for the longest time, because they didn’t want any collaboration to be about them, instead of the movie they’re working on. However, A Quiet Place changed all that. Krasinski is already tied to the project when Blunt decided to read the script. After she’d finished, the mother of two was convinced that she had to take on the role of Evelyn, who’s also a mother of two, with a third on the way. She shared, “I just loved the depth and beauty of the story, which goes beyond the horror movie atmosphere. And John and I had never worked together so that was exciting.”

The couple shares obvious chemistry and with a movie heavily focused on family dynamics, their partnership turns out to be a match made in heaven.

Which other power couples would be sizzling onscreen together if they were paired with the right movie? The Break-Up (2006) is a rom-com starring Jennifer Aniston (Horrible Bosses) with Vince Vaughn (The Internship), about Gary and Brooke, a couple deeply in love but break up after a big fight. What ensues is a battle of sexes, with them constantly at odds with each other. While Aniston and Vaughn make a great couple in a love-hate relationship and have brilliant comedic timing, the Timberlakes could give them a run for their money. In Valentine’s Day, Biel had a small part but works hard to make her role memorable amongst an ensemble cast. Do you remember that scene with her flat on the ground, dreading the fact that she’s single on Valentine’s Day?

Meanwhile, Timberlake, making that transition from pop star to movie star, also has also shown his comedic flair. In Friends with Benefit, he stars opposite Mila Kunis, as two very good friends who decided to take their relationship one step further, with first awkward, then hilarious results. Timberlake especially shines in that scene where he re-enacts his love for 90s rap duo Kriss Kross:

Now, imagine them as fighting couple Gary and Brooke? A perfect match, isn’t it? 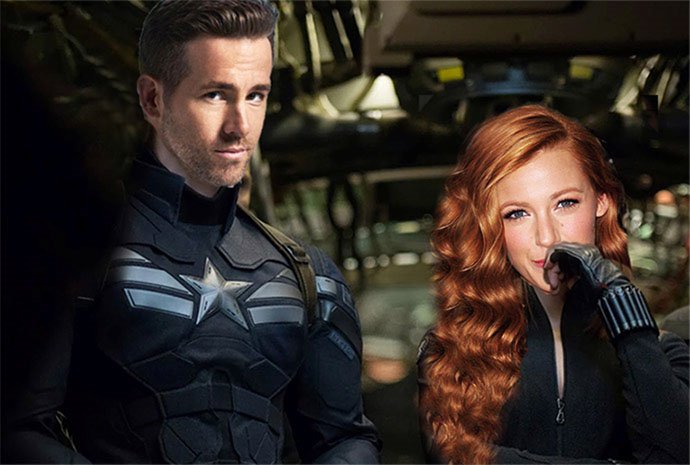 They met each other on the set of The Green Lantern. While both of them are great actors in their own right, The Green Lantern’s weak plot and cheesy CGI makes it something we’d rather forget. If this telegenic pair were to act together again, they’d make the perfect Captain America and Black Widow. Sure, there won’t be a romance between them, but they share plenty of camaraderie. Black Widow often serves as the mediator between the masculine-charged Avengers. And Captain Rogers, being the most rational of the male superheroes, often turns to Natasha for her wisdom. We’ve seen Reynolds as a sensitive guy in Definitely Maybe (2008), and Lively displayed some pretty nifty moves in The Shallows (2016). Plus, you can now start to see Lively as an attractive redhead that kicks butt now, can’t you? This sizzling Spanish duo heat up the screens in whichever movie they’re in. They’ve collaborated on movies like Vicky Cristina Barcelona (2008) and Loving Pablo (2017), but the movie that we’d really love to see them in is Bonnie and Clyde. The pair of American outlaws were originally immortalised on screen by Faye Dunaway and Warren Beatty back in 1967. Sure they’re not American, but Cruz and Bardem share undeniable chemistry and both can carry off that “villains we can’t help but love” look. Cruz will make a sultry Bonnie while Bardem brings with him a feral vibe that gives Clyde a more dangerous fugitive. They are an unlikely pairing in real life. She’s a girl-next-door actress, while he’s the king of creating oddball characters, and acting as them. But Sasha Baron Cohen and Isla Fisher have been married for seven years, and share three children. They’ve never worked together before, but if they do, they’d be great in There’s Something About Mary (1998). Ben Stiller’s awkwardness and Cameron Diaz’s effortless charm make the movie a lovable favourite. But we’re sure Cohen and Fisher can turn it up a notch. Cohen’s knack for playing wacky characters could make Stiller’s Ted an even gawkier nerd, while Fisher’s Mary will definitely be funnier, considering her natural comedic timing.

Will Smith and Jada Pinkett Smith Let’s face it, if Black Panther were produced 10 years ago, the actors playing Prince T’Challa, aka Black Panther, and his trusted wing-woman and love interest Nakia would be Will Smith and Jada Pinkett Smith. The power couple has starred in blockbusters of their own, Will for this Men in Black instalments and Jada and her Matrix franchise. And they would do the roles much justice and give them plenty of depth. While Chadwick Boseman injects a tinge of sensitiveness to Black Panther, Will’s T-Challa would no doubt be more playful. And we have no doubt Jada’s Nakia would be edgier.