Enter promotional code【MISERIES】to enjoy one of the Mission: Impossible movies FOR FREE. 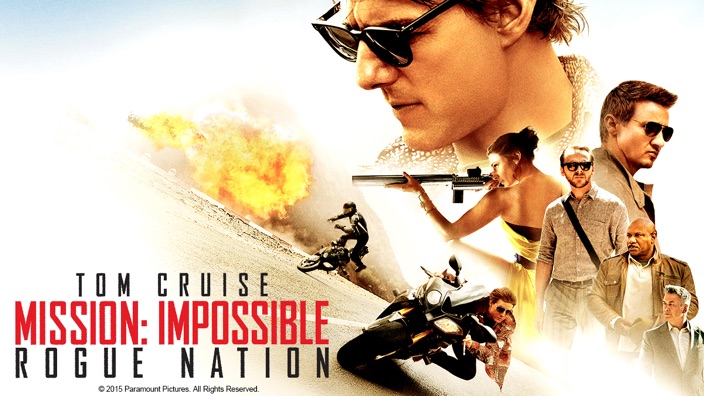 By now, you might have either seen the slow-motion video of how Tom Cruise broke his ankle while filming a rooftop chase scene (after a mustached Henry Cavill) for the latest Mission: Impossible movie, or at least heard about the incident.

The stunt shows the dedication of Cruise to his craft. Instead of getting a stuntman to do it, he opted to perform the jump himself. And that dedication is what makes the Mission: Impossible movies such a joy to watch. 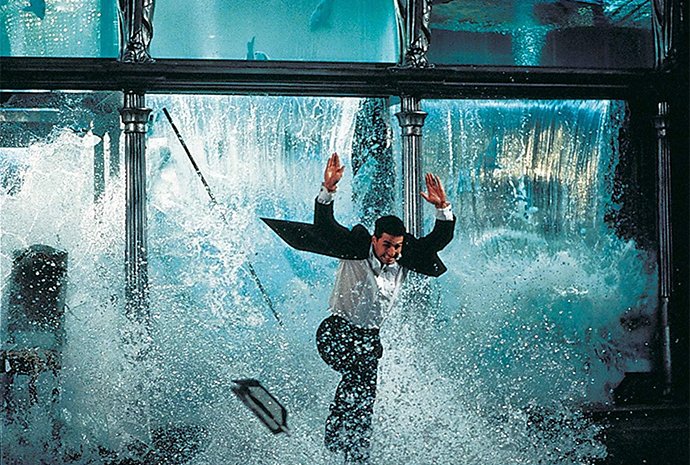 The original movie that would spark off five sequels began in 1996, after Cruise, a long-time fan of the 1960s series, championed for the project. One of the main features of the Mission: Impossible series was its big action sequences, and Cruise made sure there were plenty of them. From the helicopter blade that almost slices his face, to the close-call scene mentioned above, the movie kept us on our toes the entire time. The most nerve-wracking and beautiful scene though, has to go to the scene where the glass tank burst. The sequence started with Ethan Hunt (Cruise) meeting with the IMF (Impossible Mission Force) director in a restaurant with a giant glass wall (complete with lobsters swimming in the glass wall tank). When the conversation went south, with the director accusing Hunt of being a mole who killed his partners, Hunt knew he had to do something to get out of the situation. The glass tank looked like a convenient distraction.

Watch how the scene unfold:

Did you know:
Despite having a stunt double, Cruise insisted on doing the tank scene himself, and risked being drowned under 16 tons of water contained in the tanks. 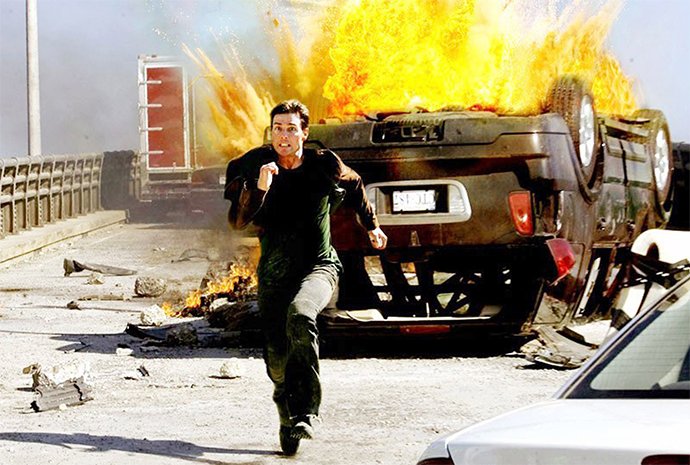 In this third movie, Hunt has a fiancée (Michelle Monaghan), which is a bad idea for a spy, because she can be used as collateral. This is exactly what happened to her. In this movie, Hunt is almost retired, all ready to be a family man and is now training young recruits. However, he has one last mission, and that did not go well, triggering a series of events that would see Hunt traversing the globe, blowing up cars in Rome and running against time along the narrowed streets of a small village in rural China. 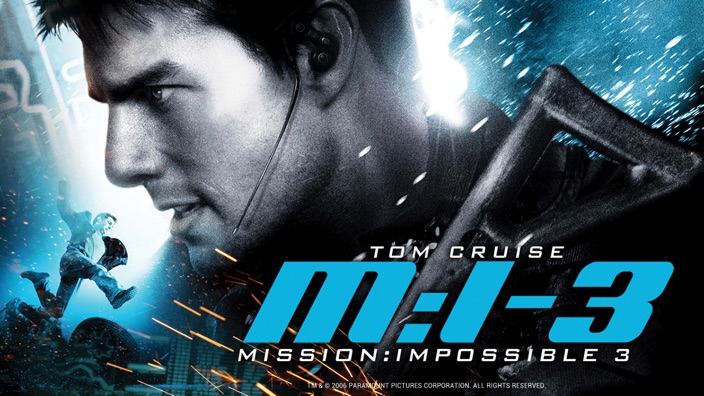 Cruise does a lot of running in the show, and in this movie, he not only ran fast but had to run away from an explosion. In this scene where the villain escapes on a bridge, Cruise performed his own stunt, running from an exploding car and get thrown against another car. Check out the explosive scene here:

Did you know:
While performing the running sequence, Cruise cracked his ribs from turning his torso too fast. 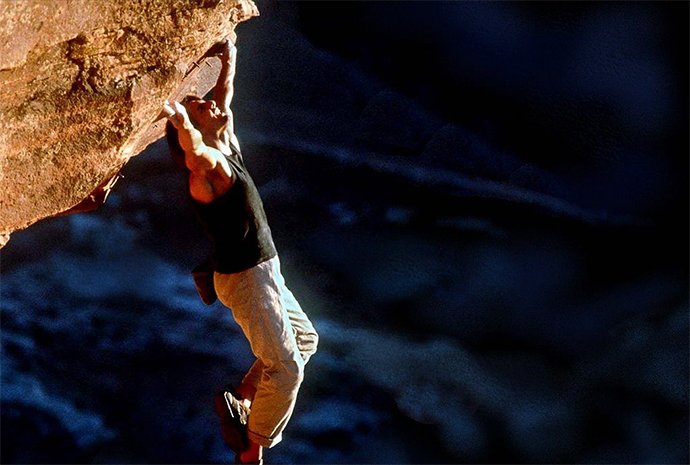 In this follow-up movie to the first, Cruise is back as Ethan Hunt with a lot of slow-motion movements, thanks to director John Woo. With the help of Thandie Newton, there were plenty of dreamy sequences, even the car chase scene between them looked like a flirty dance. Balancing the dreamy, slow-motion sequences were also fast-paced over-the-top action scenes reminiscent of Hong Kong action movies, which were where Woo horned his film-making craft. The most gripping scene is its opening, where Hunt was seen climbing a towering mountain in the Dead Horse Point State Park, Utah for leisure. It was then that he received his latest mission, in a precarious position hanging off the cliff.

Did you know:
Due to its risky level, stunt doubles were pulled in to perform the rock climbing scene, but for realism sake, Cruise insisted on performing the stunt himself despite Paramount begging him not to do it. Director Woo, too, was terrified each time but "Tom insisted on doing it". Cruise performed the climb with cables that were digitally removed in post-production. And he tore his shoulders during the scene when he was jumping from one cliff to another. 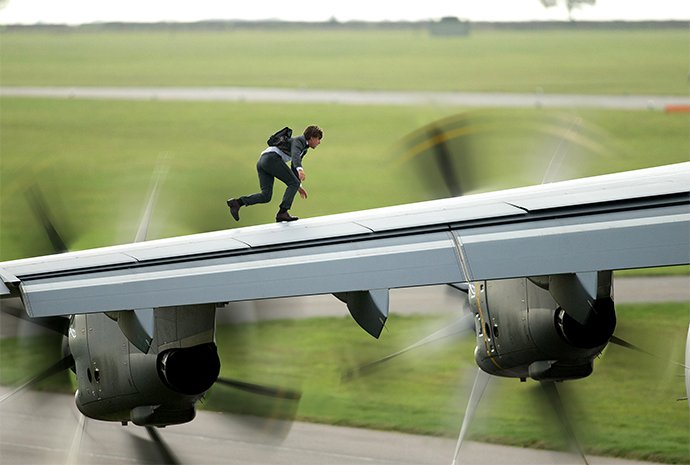 If you’ve seen enough Mission: Impossible movies, you’d be used to moles within the IMF, or that someone is always hell-bent on disbanding the IMF. This time around, the chief (Alec Baldwin) accuses the IMF of being too reckless and break up the party. And as usual, Hunt doesn’t listen and go on his own to take down a rogue organisation called The Syndicate. Things go awry at every step of the way.

The opening scene of Rogue Nation is easily its most nail-biting one, setting the scene for the rest of the movie. Barely two minutes into the movie and we see Hunt dangling at the side of the plane (Cruise did the stunt himself), determined to get some cargo off the plane, away from the bad guys. And mind you, this is even before the opening credits start to roll. What a way to start a movie!

See it for yourself: 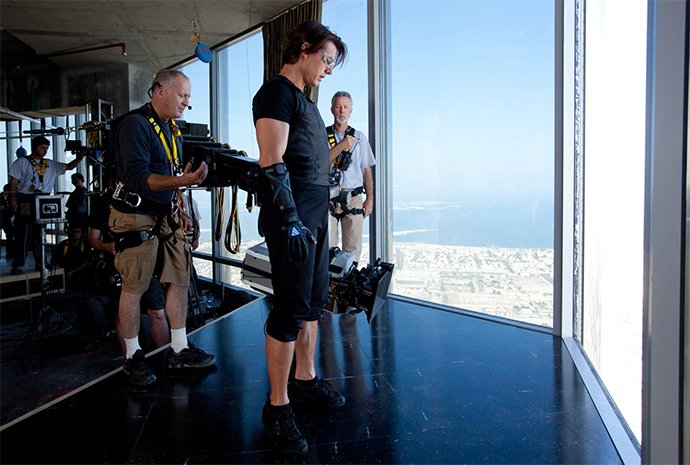 In this fourth instalment, Hunt has a whole new team. He needed to stop a dangerous terrorist from gaining access to Russian nuclear codes and attacking the United States. However, after a disastrous attempt at the mission ending with the Kremlin being bombed, Ghost Protocol is invoked, with the team being disavowed. But that has never stopped Hunt from completing his mission and saving his country. With the previous movie taking us to some gorgeous locations, this sequel follows suit, taking us to Budapest, Prague, Moscow, India, and Dubai.

The most cold-sweat inducing scene in this instalment is yet another skyscraper scene, this time at the Burj Khalifa, the tallest structure in the world since late 2008. At 828 metres in height, it’s 2.75 times taller than the Eiffel Tower, and Cruise climbed it like a walk in the park. This scene is clearly a step up from the previous movie, especially when his glove malfunctioned.

This is not for the faint-hearted:

Did you know:
To film the scene at Burj Khalifa, the windows were carefully removed by two workers chipping at it with hammers, while working from a window washing platform dangling outside the building.

After reminiscing all these heart-attack inducing sequences, we can’t wait for Fallout to take us on a spine-thrilling joyride.

Enter promotional code【MISERIES】to enjoy one of the Mission: Impossible movies FOR FREE. Sign up now.

Note: The code is valid from now till Aug 10th. Select any of the Mission: Impossible movies and click Watch Now to redeem the promo code at checkout point. Only ONE promo code may be redeemed per user account for any one movie.