The first half of 2017 brought us plenty of laughs and excitement. There was the action-packed Guardians of the Galaxy Vol. 2, the wondrous Wonder Woman, the endearing Despicable Me 3 and a handful of others. The second half doesn’t look like it’s going to slow down. Opening with huge titles like Spider-Man: Homecoming and the highly anticipated Valerian and the City of a Thousand Planets by Luc Besson, here are five other movies we can’t wait to watch. Based on the memoir 'Stronger' by Boston Marathon bombing survivor Jeff Bauman, the drama tells the story of how Bauman picked up the fragments of his life after the unfortunate disaster. Jake Gyllenhaal portrays Bauman, who becomes the face of the Boston bombing after a photo of him in a wheelchair, with his legs shredded to the bone, goes viral online. Bauman wakes up in the hospital with his life shattered and privacy gone. He manages to identify one of the bombers from his hospital bed and turns into a media darling. Following his recovery, Bauman has to re-learn to do simple things, such as walking, amid the media circus and finds strength in his family and girlfriend.

Stronger is the second movie based on the Boston Bombing incident. The other was Patriot Games, released in 2016. In that movie, Jeff Bauman was a supporting character. Look closer at the trailer, Jake Gyllenhaal sports dark brown eyes, but his real eye colour is blue. Even if you’re not a mother, 2016’s Bad Moms was still a blast, thanks to Mila Kunis’ infectious ways, her likeable character, and her chemistry with fellow bad moms played by Kristen Bell and Kathryn Hann. If you are, in fact, a mother, the movie is practically your life story, albeit a more exaggerated one. This year, these “terrible” mothers come together again. Under-appreciated and over-loaded, they now have to lean on each other when their respective mothers come to visit for the holidays. There will be drinking, there will be dancing, and there definitely will be a hell lot of gags involved.

Bad Moms was a sleeper hit. Made with a USD20 million budget, it surpassed USD100 million in US box office takings, prompting the studio to explore a sequel. Watch out for some big names in the movie apart from our familiar bad mothers: Susan Sarandon, Christine Baranski and Cheryl Hines join the party to add more chaos than holiday joy.

Jumanji: Welcome to the Jungle 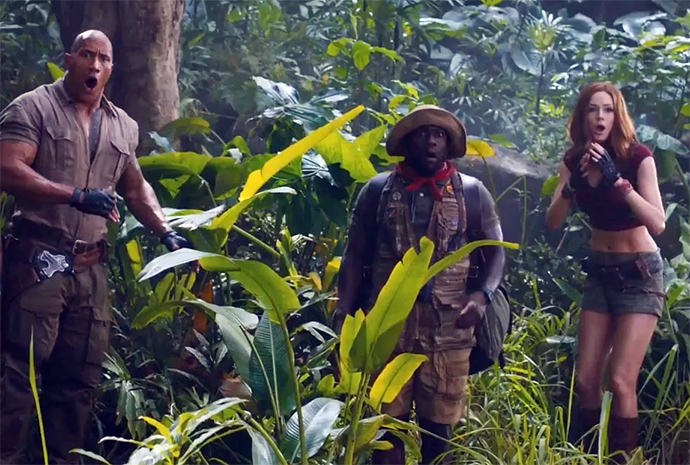 In 1995’s Jumanji, the jungle and its creatures big and small, were brought to a small town by a board game, creating chaos and destruction. This year, the players are transported into the jungle by a video game instead. This isn’t much of a sequel but an update. Four school kids find themselves in the school’s basement while serving detention and chance upon a really old video game. The moment they start the game, they’re sucked into the jungle and become their avatars. The only way to get out is if they finish the game. The premise remains the same as Robin Williams’ version, but if there’s a takeaway from the trailer, it’s that Welcome to the Jungle is a lot funnier. After all, it stars Jack Black as an avatar of a teenage girl. Combine him with Dwayne Johnson as an avatar who’s an archaeologist and explorer, the movie looks to be a riot.

If you’re not a fan of Doctor Who, you may find Karen Gillian, who plays the avatar Ruby Roundhouse, an unfamiliar face. Chances are you’ve seen her in a blockbuster earlier this year. Gillian plays Nebula in the Guardians of the Galaxy movies. She was ecstatic to be in Jumanji: Welcome to the Jungle, sharing that Jumanji was one of her favourite movies growing up. Since the trailer came out, there were quite a bit of backlash on her outfit, with many indignant at how little clothes she was wearing, compared to her co-stars. Her character’s outfit was actually modelled after Lara Croft. The Pitches are back. Again. After The Bellas won the World Championships (in Pitch Perfect 2), they discover it’s hard to kickstart a career in the music industry for A Capella musicians and find themselves torn apart. They return to the real world, holding mundane jobs like selling coffee, working at a vet clinic and other drab positions. However, the Bellas get a chance to reunite, thanks to an USO (United Service Organizations) invite to tour Europe. This time, they have to face yet another rival A Cappella group, led by new cast member Ruby Rose. Beca (Anna Kendrick) and company will again, find themselves in weird situations and make some questionable decisions.

Although you don’t see him in the trailer at all, John Lithgow has a significant role in Pitch Perfect 3, but his character is shrouded in secrecy. Based in part on the real story of Phineas Taylor "P. T." Barnum, The Greatest Showman is an original musical starring Hugh Jackman as P.T. Barnum, a man with a whimsical vision. Barnum created a spectacle from ground up that evolved into a global phenomenon, and was being credited for giving birth to show business. Expect to see a heavy-set bearded woman, a “feejee” mermaid, plenty of acrobatic stunts, and singing of course. Although the real story of Barnum isn’t quite as fanciful, the movie musical takes us on a magical ride, bringing along names likes Zac Efron, Zendaya, Rebecca Ferguson and Michelle Williams for an almost fantasy-like adventure.

Did You Know?
The movie features original music from the award-winning song-writing duo of Benj Pasek and Justin Paul, who won accolades from their work on La La Land. Jackman has declared that The Greatest Showman has been his dream project since as far back as 2009, and shared “This movie is about taking risks… and that is what is going to propel this business.”