If you enjoyed the film Deepwater Horizon, then you might want to see Peter Berg and Mark Wahlberg’s other brand new film, Patriots Day, based on the tragedy surrounding the bombing of the 2013 Boston Marathon. The film is produced by Wahlberg, who also stars as its central "every man" hero. This upcoming dramatic feature follows the events that led up to the detonation of two bombs in the final stretch of the marathon, as well as its aftermath. 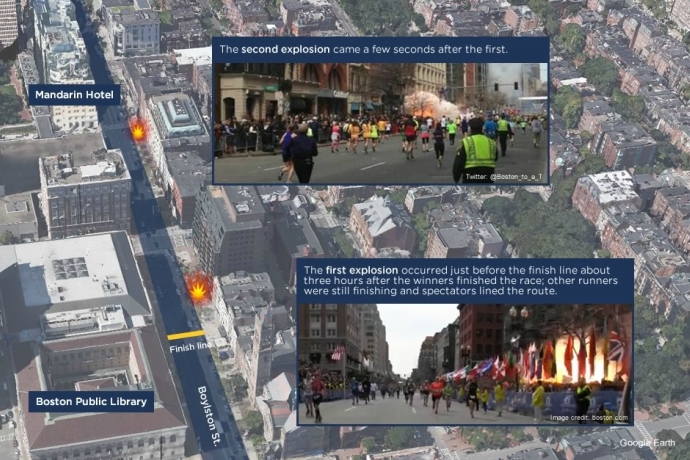 The trailer shows Wahlberg, a cop in the Boston Police Department, as he goes through his morning routine for what appears to be just a regular day on the job. The trailer also offers glimpses of a few familiar faces: Kevin Bacon, John Goodman, Michelle Monaghan and J.K. Simmons. It closes with a scene from the finishing line, and creates the bone-chilling sense that something is about to go terribly wrong.

According to The Boston Globe, Wahlberg did have some concerns about taking on the project, but in the end he wanted to make the film before someone else did who would fail to give it the proper treatment. He also stated that he did not believe that it was still too recent an event for the film to be made. J.K. Simmons reported that he had originally been skeptical about being part of the film, since he avoids films based on real-life events or biopics, but in the end he was convinced by the powerful screenplay. This is Wahlberg and director Peter Berg’s third collaboration, following on from The Lone Survivor and Deepwater Horizon- all based on true events. Coincidentally, there is a second film about the Boston bombing called Stronger that is being released sometime next year, and which stars Jake Gyllenhaal. Gyllenhaal's character Jeff is an attendee cheering on his girlfriend, and ends up losing both of his legs in the attack. The film is directed by David Gordon Green of Pineapple Express, and is based on a book by the same name written by Bret Witter and Jeff Bauman.

Patriots Day is set to be released worldwide on January 13, 2017. Release dates for Stronger are yet to be announced.