The Evolution of Ip Man 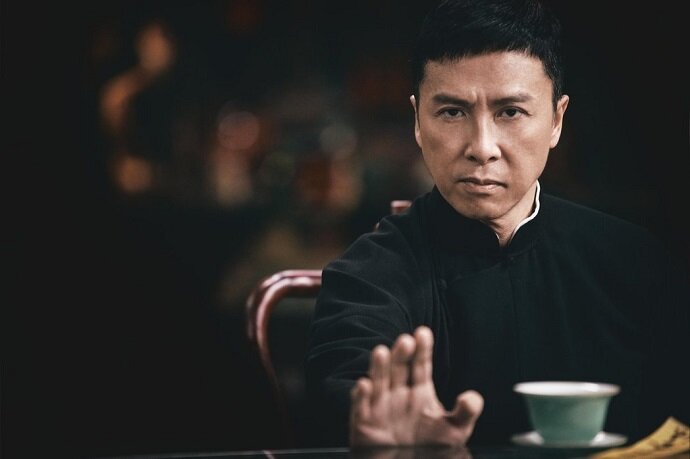 We first meet master Ip in the 1930s, where Foshan is the heart of the Southern Chinese martial arts world, where many schools recruit and compete against each other. Ip Man is an independent, wealthy man, who doesn't teach any students, but instead spends his time training, meeting with friends talking and practising martial arts. Highly regarded by the community, his reputation gets a boost when he steps in to defeat Jin Shanzhao, an aggressive Northen Chinese martial arts practitioner who had already achieved victories over many Southern masters until Ip Man. However, his wife resents Ip devoting the bulk of his time to Martial Arts.

Things would quickly change as the Japanese invasion 1937 shook things up for Ip Man and his family. The Japanese seize his house and use it as their headquarters. To survive, Ip Man has to work in a coal mine to support his family. The Japanese General Miura, a karate master, establishes an area where Chinese martial artists can compete with his military trainees. For every match won, the prize is a bag of rice. Ip Man declines, but when his friend Lin from the mine goes missing, he agrees to a match to find him. While there, Ip Man watches fellow Foshan martial arts Master Liu defeat a man, before losing to three karateka. When Liu reaches for his bag of rice from the first victory, he is gunned down by Miura's aide, Colonel Sato. Enraged, Ip Man demands a match with ten karatekas, and delivers a brutally efficient beating on all of them, despite not having practised Wing Chun since the start of the war to conserve energy for work in the mines. This display of skill intrigued General Miura and would set Ip Man down a collision course with him.

We meet up again with Master Ip in the mid-1940s. After winning his duel with General Miura (and surviving getting shot), Master Ip has moved to Hong Kong. He's opened a school to propagate the art of Wing Chun but has trouble finding students. Eventually, he has students (after they tried to attack him) but runs afoul of the martial arts schools, who demand he go through a special testing ceremony to prove his worth. Ip defeats all of his challengers, save for Hung Chun-Nam (Sammo Hung), the master of Hung Ga, whom he battles to a draw. Ip Man is accepted but refuses to pay the monthly collection fees.

Ip Man 2 is a generally more action-packed film. Even before the fight with Twister, it delivers the goods. Here, Ip Man runs the gauntlet of masters. It's masterfully choreographed and is also a sneaky showcase for all the different styles of Chinese Kung Fu in the movie.

One thing leads to another and eventually, a western boxing competition descends into chaos when the star of the show, Twister, an arrogant and racist English boxing champion begins mocking and beating Chinese martial arts students. Master Hung steps up to Twister's challenge but dies in the ring due to a combination of his asthma and refusal to concede the fight. All this leads to Ip Man challenging Twister to his revenge fight, while a secondary plotline about exposing the Superintendent's corruption goes on. Ip Man wins and gives his own very Rocky 4-esque speech about how all he wants is for everybody to respect each other regardless of status, race, and cultural differences.

The third instalment marks a distinct departure from some of the things that defined the previous two outings. There's less of the patriotic musings of what it means to be Chinese. This time, Ip Man transforms into a superheroic figure, who's willing to do anything to protect his family. Mike Tyson, of all people, plays Frank, an evil land developer who's trying to scare the school Ip's son attends off the land. Under attack and coercion from Frank's goons, Ip Man takes it upon himself to defend the school alongside his students.

Instead of the fight with Tyson or the all-Wing Chun fight with Cheung Tin-Chi, we're going with this fight with a Muay Thai fighter in a tight elevator. Always an excellent setting for a fight scene, this scene is made even more emotional by the fact that the couple has just received the news that Wing-sing (Ip Man's wife) has only six months to live due to her cancer diagnosis.

Along the way, Ip Man gets acquainted with Cheung Tin-chi, the father of his son's classmate. Cheung is a fellow Wing Chun practitioner and dreams of opening his school. He's a shady ally, who seems to play both Frank and Ip Man for his self-interest. After taking care of Frank and his weird Lex Luthor property scheme, Ip receives a challenge from Cheung Tin-chi to determine who is THE REAL WING CHUN MASTER, because of course. Ip Man just straight-up skips the fight, preferring to dance with Wing-Sing (under the tutelage of a young and freshly accepted to be disciple Bruce Lee!), completing his transformation from martial arts devotee to a total family man across the three films. Aww.

(Of course, his wife knew he only skipped it because of her, so she goes to find Cheung and arranges a rematch that Ip Man wins, but that's not the point!)