6 Things to Know About The Shining Before Watching Doctor Sleep When audiences watch the horror film Doctor Sleep, they will revisit the haunted Overlook Hotel, just like the film’s protagonist Dan “Danny” Torrance (Ewan McGregor). Doctor Sleep is the sequel to The Shining, the iconic 1980 movie directed by Stanley Kubrick.

As a toddler, Danny visited the hotel with his father Jack and mother Wendy, witnessing horrific events including his father’s derangement. Now an adult, Dan must reckon with his trauma, confronting the ghosts of his past. Director Mike Flanagan has recreated memorable scenes from The Shining that will be seen in flashbacks. Before watching Doctor Sleep, here are some connections to The Shining to look out for.

Dan Torrance possesses psychic abilities that allow him to glimpse a supernatural world beyond our own. He is not the only one who is gifted with these powers: Dick Hallorann, the head chef of the Overlook Hotel, reaches out to Danny telephatically. Hallorann and Danny can see visions of the Overlook Hotel’s past, including ghostly twins who beckon Danny to play with them. Hallorann refers to this ability as ‘the Shine". In Doctor Sleep, the now adult Dan is contacted by Abra Stone (Kyliegh Curran), a young girl who also possesses the Shining. Her powers have made her the target of a sinister cult which she and Danny must defeat. 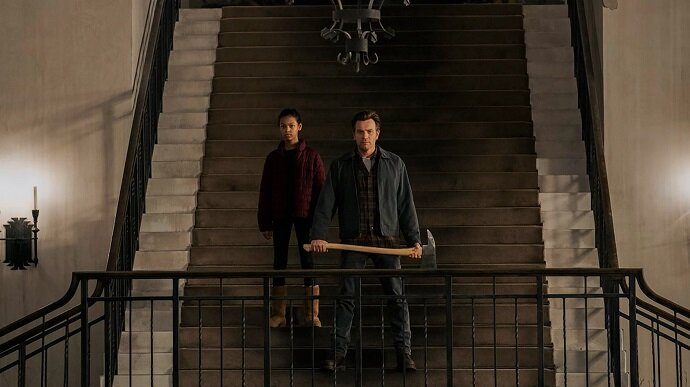 In The Shining, Hallorann warns Danny to stay away from Room 237. However, Danny’s curiosity gets the better of him and he enters the room. Later, when Jack investigates, he finds a young naked woman in the bathtub. When she kisses him, it is revealed that she is a decrepit corpse. The novel explains that this is the ghost of Mrs Massey, who came to the hotel for an illicit tryst with a younger man. After her lover stole her car and left, Mrs Massey took sleeping pills and alcohol, killing herself in the bathtub. In the trailer for Doctor Sleep, Dan looks through a hole in a door. His father hacked through the door with an axe in a fit of madness, looking through the resulting hole and shouting “Here’s Johnny!” – the catchphrase used by announcer Ed McMahon to introduce late night talk show host Johnny Carson. This scene has become one of the most iconic in horror history and is often parodied and homaged.

In a haunting scene from the trailer, Dan sees the word ‘REDRUM’ carved into his bedroom wall. In The Shining, Danny would chant and draw the word ‘REDRUM’, which made no sense until his mother saw the word in a mirror – rendering it ‘MURDER’. In the book, Danny sees a vision of the word ‘REDRUM’ spelled out in green flames even before arriving at the hotel. It appears that this one word has continued to plague Dan’s subconscious into adulthood. Interestingly, a mirror played a key role in an earlier film directed by Flanagan, 2013’s Oculus. Back when he was pitching that movie, Flanagan had described the mirror in Oculus as “a portable Overlook Hotel”. 5: Who Are The Creepy Twins?

One of the most indelible images from The Shining is that of the Grady Twins standing at the end of the hallway, calling out “Come and play with us, Danny …for ever, and ever, and ever.” The twins were played by Lisa and Louise Burns. Interestingly, the characters are referred to as sisters born two years apart in the book, but director Kubrick decided that twins would look creepier. The symmetry of the two girls standing side by side is a subtle use of the mirror motif seen throughout the film. We also see the grisly image of the twins’ mutilated bodies lying on the ground, a bloodied axe in front of them. Director Flanagan recreated the scene of Danny riding his tricycle down the corridor: eagle-eyed fans have noticed differences in the colours of the carpet, the tricycle and Danny’s hair. The fact that these details are slightly off could be significant to the story of Doctor Sleep. 6. Did Stephen King Hate The Shining?

Today, we think of The Shining as one of the best-regarded horror movies of all time, but this was not so when it was released in 1980. At the first Razzie Awards, The Shining was nominated for Worst Actress (Shelley Duvall) and Worst Director (Stanley Kubrick). Author King was notably dissatisfied with the adaptation, feeling that Kubrick had altered key elements of his story. In an interview with The Paris Review in 2006, King said the movie was “Too cold” and that there was “No sense of emotional investment in the family whatsoever”. King called the movie “a Cadillac with no engine in it,” remarking “You can’t do anything with it except admire it as sculpture.” King also took issue with how Jack Torrance, as played by Jack Nicholson, already seemed crazy at the beginning of the movie, rather than coming off as a regular man who is gradually driven mad by the supernatural entities within the hotel.

Director Mike Flanagan’s mission with Doctor Sleep was to create a sequel to the Shining novel, but one that also took place in the same universe as the film, selecting the right elements from both in a way that would honour Kubrick’s movie but also respect King’s vision. “Our job is to thread the needle and take the best of the DNA from both [the book and movie] and hopefully bring that to the audience in a fun and engaging way,” producer Trevor Macy told Nerdist. “We aren’t trying to be in custody of one party or the other in the Kubrick/King divorce.” Flanagan already had a working relationship with King after adapting Gerald’s Game, and King gave the Doctor Sleep movie his blessing.