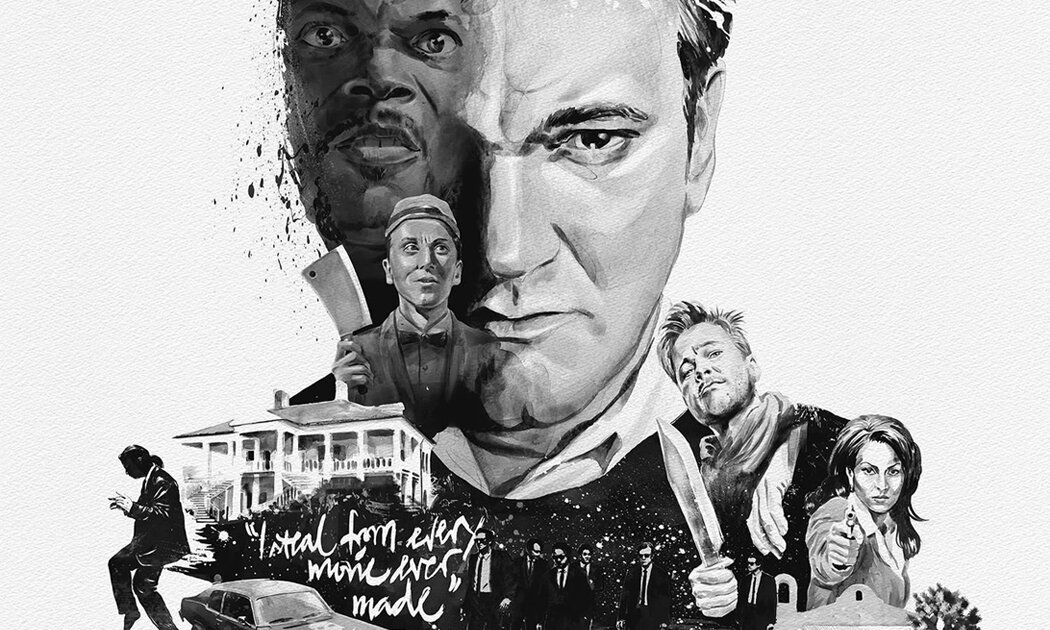 Yes, the violence is over-the-top (Django Unchained), or artistic (Kill Bill) or realistic (Reservoir Dogs), but one could never use the adjective boring.

And yet the most effective portrayal of pain, in this writer’s humble opinion, doesn’t involve a drop of blood.

Why? It’s a pain that we all can relate to.

Speaking of violence, there’s the Mexican Standoff -- an often used plot device that puts major characters in a spot of bother (and usually doesn’t end well for them).

Not sure what a Mexican Standoff is? Watch on.

While famously known for his directing chops, his penchant for writing is the one that won him the golden statuette (Pulp Fiction, 1995, and Django Unchained, 2013).

Consider the opening of Reservoir Dogs: The roundtable of merry men discussing the meaning of Madonna’s Like a Virgin and the social construct that is tipping wait staff.

While the content might be inane, the scene sets up and foreshadows the characteristics of the men in matching black suits pretty well. With his lengthy and deliberate dissection of Like a Virgin, Mr Brown establishes himself as Mr Know it All -- someone the audience will not feel for if he dies; Mr Pink insistence of not tipping confirms his role as the guy who always has eyes on the prize.

Granted, he didn’t invent it but it somewhat became his trademark, a shot that is always associated with QT.

Long before the Marvel Cinematic Universe is actually a thing, there’s the Tarantino universe.

The director famously created plotlines for his different movies that dovetail in tandem.

What makes a Tarantino film so engaging? You could probably find the answer in the non-linear storyline, which subverts the audiences’ expectations for the why and replace it with the how.

Think non-linear and Pulp Fiction and to a certain extent, Reservoir Dogs, come to mind.

Hear it from the man himself as he dissects True Romance, a film he wrote and directed by Tony Scott.

And exactly because of the non-linear characteristics of his films, Tarantino has a penchant for adding chapters or title cards to explain what the audiences are watching.

Kinda like reading a book, making it captivating for viewers.

Music, in the Tarantino sense, is akin to a supporting actor -- setting the mood for certain scenes to even owning that particular scene.

Remember Stuck in the Middle With You? Of course, you do. It’s that infamous torture scene in Reservoir Dogs.

What about that eerie whistle song as Elle Driver struts down the hospital corridor hunting for The Bride in Kill Bill Vol. 1?

Not sure about you but this writer is 101 per cent certain that QT has a foot fetish.

Here’s Vincent Vega giving his take on the art of the foot massage to Jules Winnfield in Pulp Fiction:

“I ain't saying it's right. But you're saying a foot massage don't mean nothing, and I'm saying it does. Now look, I've given a million ladies a million foot massages, and they all meant something.”

Here’s an extreme closeup of The Bride wriggling her toes.

And here’s the man himself with Salma Hayek’s foot in his mouth (From Dusk till Dawn).

A lot of the plotlines move quickly when his characters are in the bathroom, perhaps lending a case of everyday-ness and familiarity that most viewers can relate to.

And things being snorted in the powder room.