Vera Farmiga- The Scream Queen of This Generation 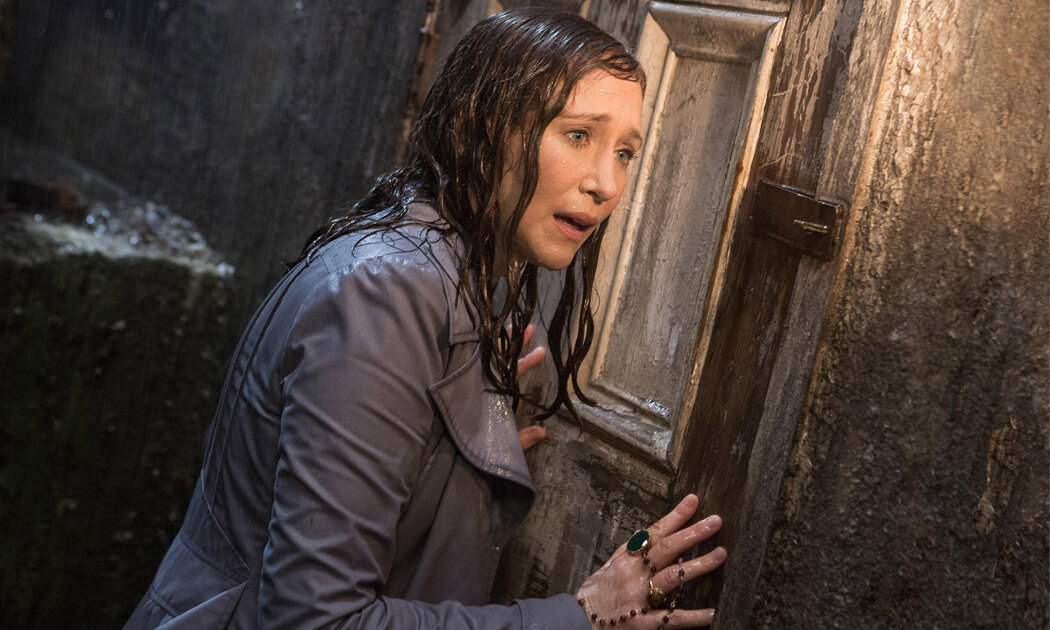 So often cast in horror films (and some of the best if this writer may add!), the very image of Vera Farmiga is automatically associated - based on this writer’s experience of watching The Conjuring series through trembling fingers -- with jump scares and sudden claps in your face.

We are about to give you all the evidence on why Vera Farmiga is the scream queen of our generation. Read on at your own risk.

1. The Nun vs Lorraine Warren Part 1 in The Conjuring 2

Scream-o-meter: OMG, is it too late to scream or run?

Before we go into the skinny, we just want to say: who paints this as a hobby?!

In this pivotal scene where the nun makes quite the grand entrance, Lorraine Warren holds up pretty well despite all the ominous signs. Blinds shutting? No problem. Obviously spooky shadow sashaying around the room? Totally fine. Said scary-ass painting of a demonic nun staring right into her soul?

Just another day in the office for the plucky Lorraine Warren.

2. The Nun VS Lorraine Warren Part 2 in The Conjuring 2

After much to and fro-ing and somewhat illegible scribbling/scratching on the Bible, Lorraine finally remembers the nun’s --  correction: the demon’s -- real name: Valak.

You see, this is vital to how the film ends because it’s kinda on its last legs, running out of good ideas to wrap things up in a yay-good-guys-boo-baddies kinda way.

So we imagine the screenwriter’s thought process.

Writer: Hmm...How do I end this horror show?

Plugs in headphones and Destiny Child’s Say My Name starts

The rest is cinematic history.

Scream-o-meter: Not sure if screaming is the right action to use here… Hmm.

When she’s not Lorraine Warren, Vera Farmiga dabbles in the small screen trade as Norma Bates, mother of one Norman Bates.

Not a horror story in the traditional sense, Bates Motel, however, gives further shine to Farmiga’s acting chops.

Check out all the times when Norma freakouts here:

Indeed, all the times when both Norma and Norman share the same scene (and that kiss...) are so weird and somewhat-sexual that they can easily plant seeds of doubt in every mummy’s boy.

And, ladies and gentlemen, that’s real horror right there.

Not all scream fests have to be loud and visual. Sometimes the most effective one is a silent, visceral scream that blends your insides.

Just like this scene from the early days of The Conjuring universe, where we first meet Ed and Lorraine Warren at Amityville.

5. Classic Hollywood liner in The Orphan

What can we say about The Orphan? Interesting premise but reveals its aged (hurhur) storytelling somewhere near the third act.

That said, we have to commend Farmiga’s irrepressible mother’s instinct to protect her child.

Seemingly out of the woods, the “nine-year-old” Esther charges at Farmiga’s Kate who is running toward freedom with her daughter.

A few slashes, a gunshot and some struggling in the freezing pond later, Kate emerges victorious and ends the sequence with a truly Hollywood line.

Scream-o-meter: OMG, which part of “Do not enter” do you not understand?!

And we come full circle.

Reprising her role as Lorraine Warren, Farmiga is back with more screams (maybe not so much as the story revolves around adolescents who cannot read signs and cannot keep their hands to themselves).