Sorry to Bother You- A Sharp Critique on White Privilege, Ethnic Identity and Wanton Capitalism And so the earnest Cassius gets a job at Regal View telemarketing, where he got hired because he brought a bootleg trophy and a fake resume - “You have initiative and you can read,” Anderson (Robert Longstreet) reasons.

But S.T.T.S is more than just a telemarketing motto - it is also a crippling mantra that the powerful use on those below in the food chain, to subdue their voice. 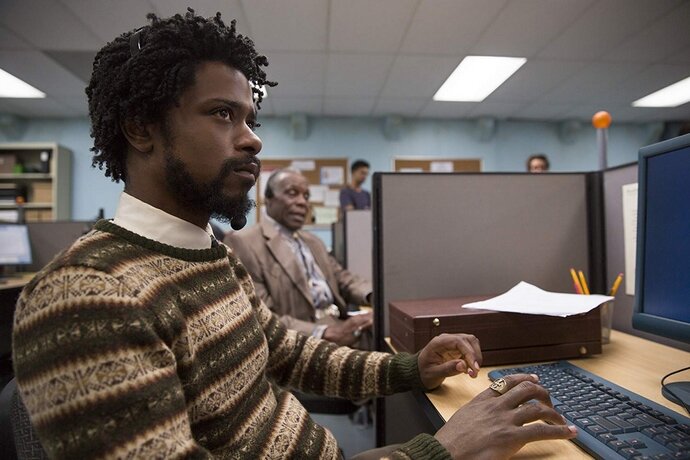 So it’s not surprising that Sorry to Bother You is not just a surreal story about a guy who experiences ethical conflict as he moves up the corporate ladder, but also a social commentary that throws white privilege, ethnic identity, and wanton capitalism into a blender and slammed the “supersonic” button.

But this is not some preachy mockumentary. Director Boots Riley is a talented storyteller, and places his narrative in an alternate universe of Oakland California, where cubicle boundaries drop when a marketing call is made, and bioengineered humans are the way forward. Hard-hitting and unabashed, Sorry to Bother You begins the irreverent ride with Cassius Green (sounding very much like “cash is green”) being advised by his colleague Langston (Danny Glover) to use his “white voice”. This would probably be offensive out of the screen, but here, it’s cushioned by Riley’s imagined construct. And like a good boxer, the gritty director does swift one-twos with his acerbic script, such as having Langston explain further that, “I’m not talking Will Smith white.”

It’s obvious now, ladies and gentlemen, that the seatbelt signs are off. Cassius soon finds himself something of a talent in switching to his nasally, smarmy tone (voiced by David Cross) to effectively sell his pitch, so much so that he quickly becomes a Power Caller. The term is reserved for high-performing staff who moves to another section of the building, via their own private motivational-spouting elevator no less, who sell more than just encyclopedias, get a real salary, and enjoy benefits.

While this is happening, his buddies at work, Squeeze (Steven Yeun) and Salvador (Jermaine Fowler) petition for union rights, inevitably forcing Cassius to choose between material gain and loyalty to his brethren. Throw his activist artist of a girlfriend Detroit (Tessa Thompson) into the mix and you can only imagine the conflict, especially when he is selling for Worryfree, a modern sweatshop company trading in cheap human labour.

It takes a while for the tempted Cassius to make his final decision, helped by a ghastly discovery that really strips things bare when Worryfree CEO Steven Lift (Armie Hammer) offers him the job of a lifetime. Trust me when I say that nothing will prepare you for the reveal beyond the jade/olive door. Sorry to Bother You is as zany as it is relevant, and as brutal as it is funny. Visual gags pepper the film, with plenty of nudge-and-wink moments that instantly indoctrinate you into the message. The references are indiscriminate, unlike many of the characters in the film, and feature anything from pop culture (Minions and Michel Gondry) to subversive stereotypical comments.

Name-play too seems big with Riley. Detroit blithely remarked that her name came about because, “my parents wanted me to have an American name”, and team leader Diana Debauchery (Kate Berlant) insists her surname is pronounced dee-bo-cherry.

The uncensored delivery is refreshing, and lifts the film above the heavy matter, making the proverbial pill easier to swallow. There is a message here, but let’s do it over beers, cocktails, and a whole lot of kitsch, I can imagine the director saying. Even the cinematography and set design supports the anarchic mission in a beautiful way. Clubs and parties are bathed in duotone goodness, while publicity campaigns hide their sinister agenda with pastels or bright colours. The movie registers on so many levels - there’s truly something for everyone in here. You can take away a seed of the social conversation that is tossed up by the straightforward propositions of Detroit, or you can try to read between the lines and let the wit land squarely on your logic throne to make you question your mindset and habits. It wins all round when it comes to appeal, and is likely why it received 16 wins and 39 nominations at various festivals, including winning Top 10 films at African-American Film Critics Association, Best Original Screenplay at Black Film Critics Circle Awards, Best First Feature at Film Independent Film Spirit Awards, and Top 10 independent Films at National Board of Review, USA.

And just when you think you are surfing towards that idealistic ending, the film veers once again, much too self-aware for its own good, and delightfully careens into a crash zone that’s a ball pit free-for-all, except that the balls in this case, are centaurs gone wrong, apologies made right, and a very unprepared CEO.