Mean Girls: Then and Now 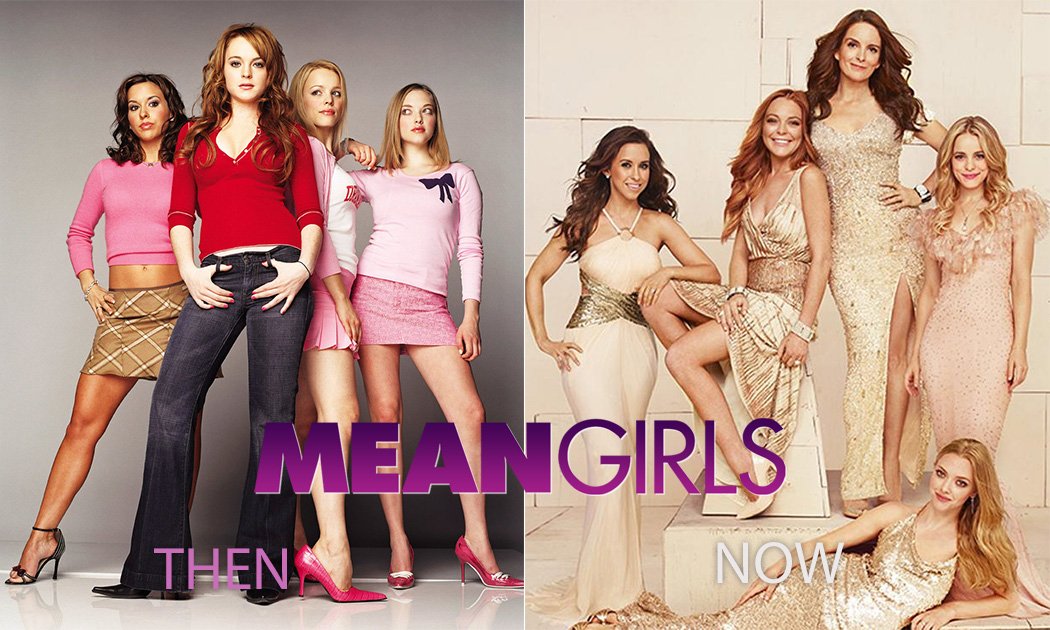 Sometimes, there are movies that are so memorable that they are adapted into musicals. The 2000 hit Billy Elliot (Jamie Bell), for one, made a successful transition from screen to stage, running for 12 years now, and counting. Likewise, the 2001 Legally Blonde (Reese Witherspoon) movie made its debut as a musical on Broadway in 2007 and is currently on tour in the UK. The latest movie to jump on this movie to musical bandwagon is Mean Girls, and that’s just so fetch. Written by original Mean Girls writer (and co-star) Tina Fey, the Mean Girls musical is set to premiere in Washington end of this year before making its Broadway debut in March 2018. Before we all rush for tickets to catch it, let’s do a quick check in on the original Mean Girls Cast. Mean Girls (2004), along with Freaky Friday (2003) and Herbie: Fully Loaded (2005) catapulted Lohan into superstardom. Having earned praise from playing a pair of twins in The Parent Trap (1998), she took a hiatus from acting to concentrate on her musical career. She returned to acting with Freaky Friday opposite Jamie Lee Curtis and went full steam ahead. Lohan was a fresh-faced 17-year old during Mean Girls and played the likeable Cady Heron with an effortless charm. A party animal and paparazzi darling in real life, Lohan’s face was splashed across almost every tabloid, and her off-screen antics soon overshadowed her acting ability. Fame and fortune quickly chipped away the teen star’s youthful appeal and after multiple run-ins with the law due to alcohol and substance abuse, Lohan’s career nose-dived in the years following the movie’s success. Today, Lohan is sober and resides in London, a choice she made to stay away from the “toxic” Hollywood. She has not headlined a movie for years and had been only getting bit parts in mediocre films. In 2014, she made her stage debut in the London West End production of David Mamet's Speed-the-Plow, a satire about the movie business, and her performance was met with mixed reviews. Lohan currently stars in a UK comedy series Sick Note, alongside Harry Potter alumni Rupert Grint and Nick Frost (Hot Fuzz, Shaun of the Dead). Amanda Seyfried was an unknown when Mean Girls came out. In fact, the movie was her big-screen debut, having only acted in small roles in two soap operas prior to Mean Girls. As Karen Smith, one of the “Plastics”, her character is as bland as her name; she’s easily the most forgettable of the cast as a floozy airhead and sidekick of Rachel McAdams’ Queen Plastic. Let’s just say Seyfried’s popularity is now miles ahead of Lohan. Since Mean Girls, the affable Seyfried waddled through more bit parts in both TV series and movies to emerge victorious with Mamma Mia! opposite Meryl Streep. Following her role as Sophie in the musical comedy, Seyfried started to get leading roles, like Cosette in the film adaptation of the musical Les Misérables, and eventually headlining the biopic Lovelace, as one-time pornstar Linda Lovelace. Her performance was praised by critics, and Seyfried’s star continues to shine. In 2018, she will be reprising her role as Sophie in Mamma Mia! Here We Go Again, the sequel to the 2009 hit. Rachel McAdams was already active in her native Canada when she was cast in Mean Girls. She made her Stateside debut in Hot Chick (2002), and as the catty leader of a pack of popular girls in school, her Regina George role in Mean Girls propelled McAdams from being a familiar-looking actress to a famous one. Critics called her character “delightfully hateful” and praised her comic flair. She followed Mean Girls success with the romantic drama The Notebook, which catapulted her to greater heights. Working steadily since her Mean Girls days, McAdams has appeared in more romantic movies, thrillers and action adventure films. Her biggest role to date was playing investigative journalist Sacha Pfeiffer in the drama Spotlight. Her earnest performance in the movie earned her a nomination for the Academy Award for Best Supporting Actress. She will next appear in the third instalment of Sherlock Holmes, with Robert Downey Jr. When Mean Girls first launched, Chabert had the most extensive resume amongst her young co-stars. Acting since she was eight, her most famous role has been Claudia Salinger in the TV series Party of 5, which ran for a good six years. Her character in Mean Girls, Gretchen Wieners, was most remembered for trying to make the word “Fetch” an “in” word, only to be rebuffed by Queen of Plastics Regina. Ironically, while the word failed to “happen” in the movie, it has spawned a series of Memes in real life, even earning a spot in the Urban Dictionary. Despite her long string of work, Chabert’s career never soared to dizzying heights but hovers slightly above ground instead. Since Mean Girls, she has been busy, but mostly on the small screen. She has also carved a niche in voice acting, most notably as Eliza Thornberry in The Wild Thornberrys movie and subsequent TV series. She was also the voice of Gwen Stacey in The Spectacular Spider-Man animated series and as Meg in the Family Guy. Chabert’s most notable work of late is voicing Zeta the Sorceress in the popular children series Shimmer and Shine. Tina Fey was already an established comedian when Mean Girls came along, having written and appeared on Saturday Night Live. Along with her writing team, she’d won awards at the  Writers Guild of America Award (2001) and the Emmys (2002). Fey wrote the Mean Girls screenplay based on her high school experience as well as adapting from the non-fiction book Queen Bees and Wannabes by Rosalind Wiseman. As the sympathetic teacher Ms. Norbury who became somehow embroiled in the chaotic world of teenage girls, Fey held her own and proved she not only could write but act as well. Since the days of Mean Girls, Fey has moved on to bigger and better things. She created and co-starred in the sitcom 30 Rock, which won her and the series Emmy Awards for Outstanding Actress in a Comedy Series and Outstanding Comedy Series respectively. She also went on to win Golden Globe and Screen Actors Guild Award in the same category. 30 Rock ended its seven-year run with 112 Emmy award nominations and was hailed as one of the greatest TV series of all time. Fey was awarded her own star on the Hollywood Walk of Fame in 2011 and was listed at the top of Forbes magazine's list of the highest-paid TV actresses. So far, Fey has received nine Primetime Emmy Awards, two Golden Globe Awards, five Screen Actors Guild Awards, and four Writers Guild of America Awards, and shows no signs of slowing down.