Nocturnal Animals Is All Style, Symbolism and Suspense Tom Ford proves once again that he is not just a talented designer: he is just talented. Nocturnal Animals is based on the novel Tony and Susan by Austin Wright. Amy Adams plays Susan, and Jake Gyllenhaal plays Edward, her ex-husband. She is an art gallery owner, who is now stuck in a loveless marriage that provides her with the social and material comfort that her mother always wished for her. She receives a manuscript from Edward, and in opening this package, suffers a paper cut that draws blood. This is Tom Ford’s masterful, visual symbolism at play, although one may not notice at first.

She reads, and the audience is immediately taken out of LA and driven straight to Texas where the novel is dramatised on screen. Tom Ford seamlessly transits between Susan’s life and the fictional novel with splendid finesse.

One of the themes in this movie is art, and here we get to watch this fictional story as it plays out visually in Susan’s mind while she reads. She casts her ex-husband as Tony (also played by Gyllenhaal), a man who is travelling with his wife (Isla Fisher, whose long red locks are reminiscent of Adams’) and daughter. They encounter a violent trio of gangsters and Tony is separated from them. The gangsters terrorise his wife and daughter, who are left pleading and begging for their lives. The sheer danger, the viciousness of their abuse, the visceral fear we all feel is shared through the intercutting of Susan’s horrified reactions until she finally stops reading.

By this time, the suspense is thick, and we do not know which questions to ask first. What happens to the mother and daughter? What about Susan’s disturbed state when she realises that this violent piece of work is dedicated to her? Or as she reveals to her assistant that “my ex-husband used to call me a nocturnal animal” and that Nocturnal Animals is the title of this manuscript? What do we want revealed first - Susan’s intriguing relationship, or the fate of the mother and child? Does any of this relate to the much talked about opening scene?

Nocturnal Animals' opening scene features naked and obese dancing females. It is confronting, not pretty, which is in contrast to Susan, who is like porcelain, perfect, a collector of grotesque art. Juxtapose that with the later scene of the raped, dead bodies, bloodied but draped and framed almost prettily like art. This reminds me of my experience as a young film student in university watching a David Lynch film for the first time and feeling repulsion and confusion during certain scenes. Upon further research and analysis, I understood the imagery and the style and appreciated the Lynchian film more the second time I watched it.

It is only after watching some of Tom Ford’s interviews that I appreciated some of his intentions, and this made the second viewing of the film an exercise in unravelling his brilliance. The opening scene is actually a representation of Susan: the dancing and the bodies are free, happy, and completely socially unacceptable. The next image is of Susan, picture-perfect, but trapped in her own web of misery. One of the things Tom Ford talks about is how he planned for real art pieces to be seen in Susan’s world, and how he recreates these visuals in the dramatisation of the fictional novel because Susan is an art dealer and the audience sees the novel through her visual interpretation as she imposes images from her daily life – art – into the story. The same way she imposes her ex-husband’s face onto the character of Tony.

The mystery unravels and we learn of the fate of the characters in the novel, which is interwoven with Susan’s past and present. Her current, rich, caddish husband is cheating on her and leaving her with nothing. Edward has proven to her that he can make something of himself in the pursuit of his art, but he also makes a more poignant accusation with his art. She was his nocturnal animal, and just like the nocturnal animals in his novel (the gangsters) she has ripped his marriage and child away from him. Yet for all the drama in the stories, Tom Ford and cinematographer Seamus McGarvey serve it like a cold dish of beautiful, visual art and leave a shred of mystery as the film ends. The amazing actors are integral to keeping us continually invested in this movie about a story within a story. 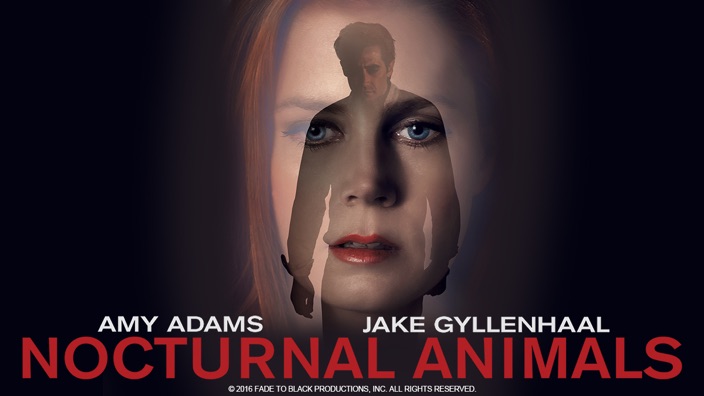 Nocturnal Animals provokes one to make a choice – ignore the intentionally interesting elements, or dig, dissect, discuss… and go online to uncover all of the director and actors’ interviews for some answers!