When she played Princess Leia in the Star Wars saga, Mrs Han Solo never failed to steal the limelight. Thirty-nine years later, the world mourns not only a talented, but also a beautiful and brilliant woman. Carrie Fisher, at the age of 60, died on Tuesday morning after a fatal heart attack, which she suffered while travelling from London to Los Angeles. Besides acting, Fisher is also well-known for her writing skills. Her best-selling novel, “Postcards from the Edge”, was written in 1987. The book centres on an actress (based on herself) who is fighting to save her career after an overdose. Fisher also wrote the screenplay for the film, directed by Mike Nicholas, that starred Shirley MacLaine and Meryl Streep. Harrison Ford, Carrie Fisher and Mark Hamill on the set of The Empire Strikes Back

In 2008, Fisher wrote an autobiographical novel, “Wishful Drinking”, which was based on the stage production of the same name. Recently, Fisher has been promoting the memoir of her “Star Wars” years, “The Princess Diarist”. Fisher revealed that she had a three-month long affair with her co-actor, Harrison Ford, while filming the iconic 1977 Star Wars. Ford, at the time, was married to Mary Marquardt. She described the relationship as intense: “It was Han and Leia during the week, and Carrie and Harrison during the weekend.”

Ford paid tribute to his co-star in a statement: "Carrie was one-of-a-kind, brilliant, original. Funny and emotionally fearless.” Stars Wars co-star, Mark Hamill, expressed his sadness at the death of Fisher 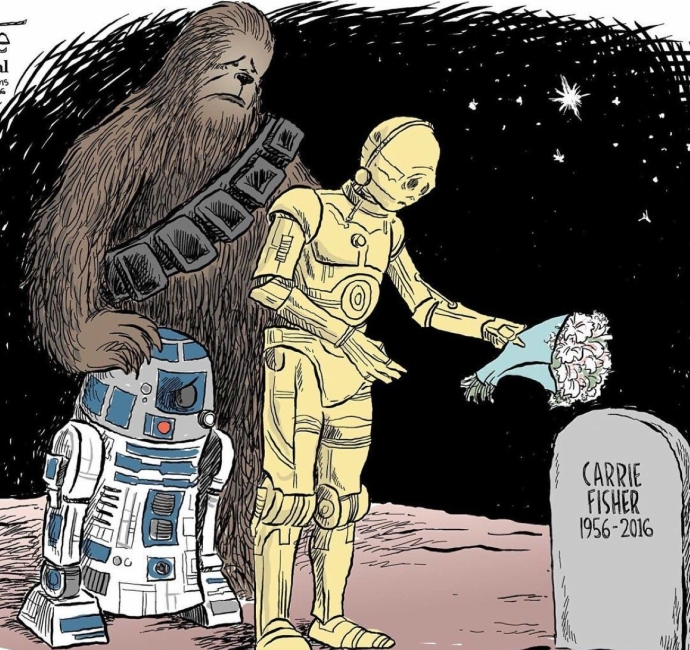