Rudderless, No Lack of A Story How do you cope with the loss of a child? Especially in something as senseless as a college massacre? Rudderless seems like a movie that tackles the aftermath of that loss, through the eyes of a grieving father, Sam (Billy Crudup).

The movie begins with his son, Josh (Miles Heizer), making music in his dorm. Sam is a high-flying, executive father, whose life comes crashing down when he learns about the shooting. Fast forward two years, and Sam is living on a boat, working a construction job, and not talking about his former life. His ex-wife, Emily (Felicity Huffman), leaves him a box of their son’s music CDs, along with songs that he wrote and recorded, saying that music was their father-son thing. Sam starts listening to and playing some of the songs his son wrote. The movie seems to be about how this father deals with loss, or rather, how he does not deal with loss, taking to the bottle in his non-musical spare time and being numb to the world. 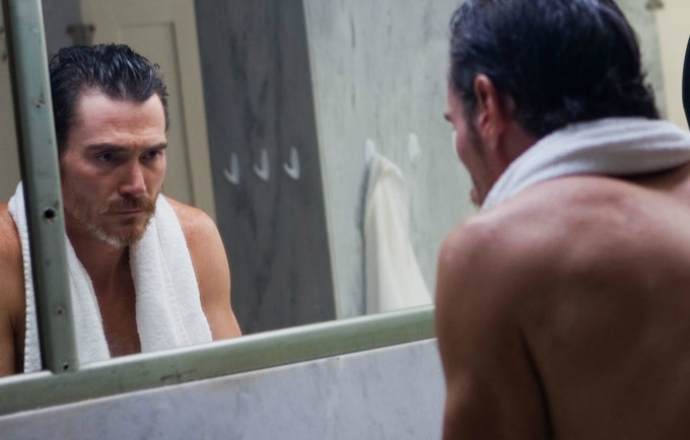 Rudderless stars Billy Crudup as a grieving father who has lost his son in a terrible tragedy.

Quentin (Anton Yelchin), a young guitarist, hears Sam by chance one night at a bar called The Trill, as he sings his son’s songs. He is so stricken by the music that he tracks down and chases Sam to hear more of “his music” and to convince him to perform as a duo. The duo eventually expands and becomes a band. Sam remains elusive and private, he does not even tell the band that the songs were written by his son. However, he does start mentoring Quentin. The band is given a regular spot at The Trill by the bar owner (played by actor William H. Macy, who is also the director of Rudderless). The late Anton Yelchin stars as Quentin in Rudderless

Just as things are seemingly going in a cool, quaint, indie-healing direction for Sam and his band of youthful musicians, a girl shows up at one of their performances. She is Josh’s ex-girlfriend (Selena Gomez) and lashes out at Sam, telling the band that the songs were in fact written by his son. This is where the movie launches into an unexpected twist.

This is William H. Macy’s directorial debut, and he spent a year reworking the screenplay with the writers, especially working on its twist. His real life wife, Felicity Huffman, plays Emily, lending star power alongside other big name cameo performances by Laurence Fishburne, who plays Del, a music store owner, and Selena Gomez as Kate Ann Lucas. Fans of indie folk music will also enjoy the many songs played throughout the film, performed by the band in the film, Rudderless, as well as lead actor, Billy Crudup, Selena Gomez and Eef Barzelay.

The concept of healing and moving on is finally addressed in the third act – when we find out this is not just a feel good movie about moving on and staying connected with a lost child through cool music.

Sam reunites with his ex-wife to clean their son’s grave. Sam finally breaks down, coming to terms with events, and eventually, the movie closes with him being able to talk about his son and the music he wrote. Watch this film, and see how the interpretation of a father’s grief can take on different forms in this different story.