A Paranormal Weekend – Where Screaming is your Activity! Do you need to get rid of a ghost? Kosher salt, holy water, burning sage or firmly asking them to leave are considered valid methods.

Part of the fear factor in horror films entails the feeling that it could happen to someone in real life. "Saw" succeeded in this by featuring gross-out torture games that are motivated by the perpetrator having a real life grudge. "Paranormal Activity" is based on actual events captured on film in a real life encounter with the supernatural realm and actually features found footage.

The first "Paranormal Activity" cost only $15,000 to produce. It hit the screens in 2009, and the rest is history. The franchise consists of 6 films (total budget $28 million) and the series as a whole has earned over $880 million. This shows that tens of millions of viewers are fascinated by the fact that this horror film has its humble roots in reality-based real time filming. Paranormal Activity 2 take place two months before the events of the first "PA". After experiencing what they believe to be a series of break-ins, a family set up a net of surveillance cameras in an attempt to discover what is actually going bump, crash and clatter in the night (this is where most of the “found footage” comes from). The mysterious activity then proceeds to become even more blatant and violent. Paranormal Activity 2 is an absolute thrill to watch and will leave you wondering whether your dog really is barking at nothing, as all dogs seem to do, or if there is actually something there that they can see and you cannot... "Paranormal Activity 4" is a 2012 found footage film featuring possession and witchcraft. It is based around the death of Kristi and Daniel Rey at the hand of their sister Katie in 2006. Katie has abducted their little boy Hunter and to this day his whereabouts remains unknown. When paranormal activity starts appearing in a family home in Henderson, Nevada in 2011, it is thought that Katie and Hunter might be back, in one form or another. What do these two want, or is it not even Katie and Hunter? "Paranormal Activity: The Marked Ones" is the fifth installment in the series, and is written and directed by Christopher Landon. This time a young Latino man named Jesse is destined for possession. When a witch is murdered and one of Jesse's classmates is seen fleeing from the scene, he and a friend set out to investigate her apartment. But this sleuthing leads to a morbid curiosity in the realm of the unseen. Jesse begins to sink too far into the occult and becomes possessed. While his possession provides him with super human strength, has he gone too far? 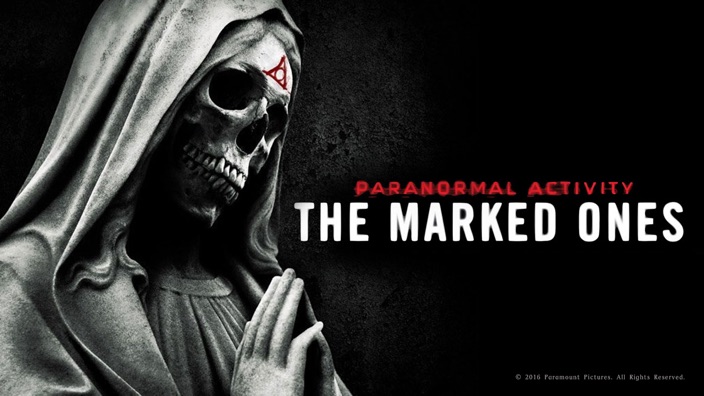 This weekend, turn off the lights, turn on your TV and let’s hear you scream!