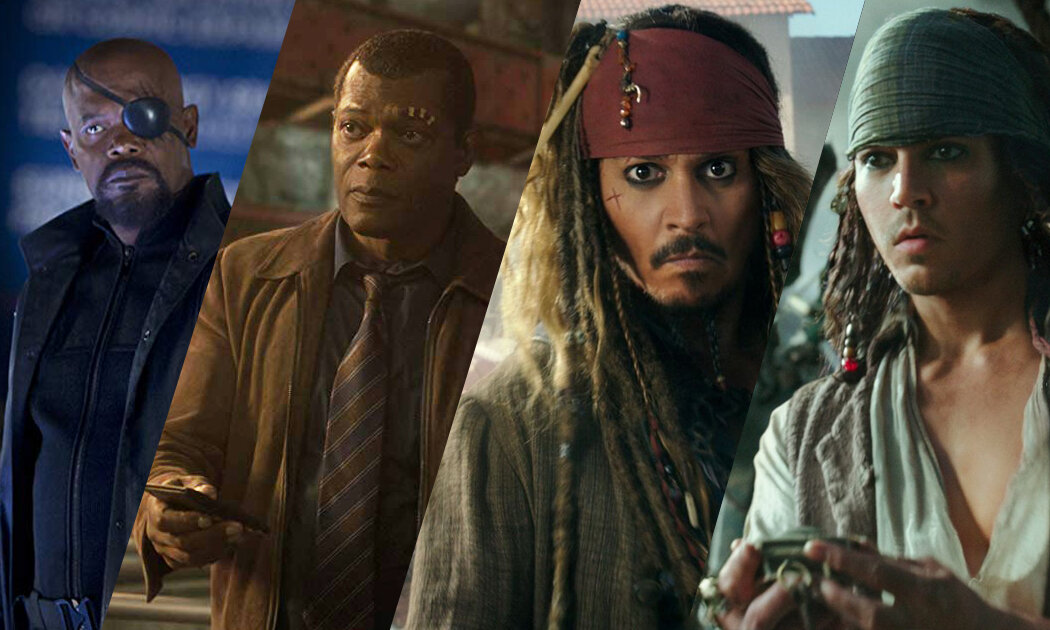 With Captain Marvel, we see a young Nick Fury, with both his eyes intact and a smooth, youthful look. At the grand old age of 70, Samuel L. Jackson is able to relive his youth, thanks to movie magic- and a lot of post-production work. Jackson had to put on a wig, and many dots on his face when he acted alongside Brie Larson as the titular character in Marvel’s 2019 outing. The result is spectacular, Fury’s every facial expression looks natural. Jackson (and Clark Gregg) isn’t the first actor to undergo the de-ageing process. There are plenty of other actors who found their digital fountain of youth as well. Here’s a look at 9 other actors who’d become Dorian Gray, at least on screen.

This Pirates movie is filled with visual spectacles, but none as stunning as the youthful looking Jack Sparrow, in a flashback scene in the movie. The sequence tells the backstory of Sparrow and Captain Salazar (Javier Bardem). Depp must have looked around 25 younger than he really was at the point in filming. The “youthful” effect was thanks to a “CGI facelift”, with actor Anthony De La Torre taking on the young Sparrow role, and had Depp’s face digitally “planted on”. This definitely brings us back to Depp’s 21 Jump Street days. As Ego in Guardians of the Galaxy Vol. 2, Kurt Russell plays Ego, Starlord/ Peter Quill’s real father, a sentient Celestial being that wanted to “plant” himself all over the universe. When it comes to digging into the backstory of Ego and Peter’s mother’s relationship, a young actor named Aaron Schwartz was involved. Schwartz had to mimic Russell’s actions, and then mapped into Russell’s body. And yes, many black dots on faces were involved.  It was a long process that took months to complete, thanks to the people at Lola Visual Effects. The result is startling, it was like we were seeing a Kurt Russell back in the 80s. 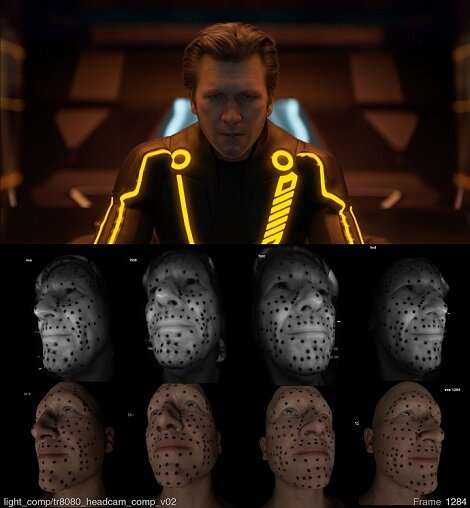 It was a movie every original Tron fan was waiting for. In Tron: Legacy, then 61-year old Jeff Bridges “regain” his youth as a computerised avatar named “Clu” who has not aged since he was first created in 1982. To create a young Bridges, the filmmakers created a silicon mould of Bridge’s face and painted it in flesh colour. They then took multiple photos and used computer magic to give him a “digital face-lift” that took out wrinkles and smoothen the skin around the nose. Bridges had to perform a series of facial movements that were recorded by camera and computerised in 3D. The final stage is for Bridges to wear a helmet with four tiny cameras pointed at his face with (yet again!) dots on his face as reference points for the computer. An almost unrecognisable 58-year old Temuera Morrison first appeared as a young lighthouse keeper who met the queen of his dreams in the form of a youthful and luminous Nicole Kidman in Aquaman. Gone were the wrinkles and white hair on Temuera, and Kidman looking even more regal than ever. In fact, this de-aged version of Kidman looked even more beguiling than Kidman was at a younger age. Willem Dafoe’s cheeks were less sunken and he’s much lither as a younger Vulko, teaching a young Arthur Curry the fighting ways of Atlanteans. It sometimes take up to six hours in the makeup chair for Cate Blanchett and Brad Pitt in The Curious Case of Benjamin Button, a story about a baby born like an wrinkly old man only to age in reverse. Cate Blanchett enters the picture as a normal young girl who grew up and close with Benjamin Button (Pitt). The eventual star-crossed lovers find themselves intertwined with each other, for life. The movie ages and de-ages the two actors, whose characters span eight decades, thanks to a group of talented makeup artists.

Both heavyweight actors shaved decades off their age thanks to once again, Lola Visual Effects, for X-Men: The Last Stand. Although no plastic surgery was involved, they were consulted in what needed to be removed digitally from the actors’ faces to make them convincingly young. While acting, the actors also had extra layers of makeup applied on, although not overly much. Then with clever lighting and post-production magic, the results speak for themselves.

Michelle Pfeiffer plays Janet Pym, the original Wasp, who worked with her husband Hank, 30 years before the events of the Ant-man movie. In Ant-Man and the Wasp, we revisit Hank and Janet in their youth, with a surprisingly dashing and younger Michael Douglas, just like he looked in Fatal Attraction, and a stunning Pfeiffer. They were both “youngified” by being dotted up on their face as points of referencing, and digitally resculpt and reshaped. Terminator itself is a special effects-based movie, and Arnold Schwarzenegger’s terminator didn’t require him to have dots on his face, but recreated relying on almost purely special effects. A young Australian Body Builder, Brett Azam was hired to play the young Terminator in a scene, as reference to how the character would move, and eventually replaced by a digital character completely. Princess Leia’s appearance in Rogue One received gasps and applause. It was nice to see the tie-in from Rogue One to A New Hope. Leia was created entirely in digital, resembling the feisty princess we first saw back in 1977. In fact, it was so realistic that Carrie Fisher herself thought it was real footage from the original film, just that she didn’t remember shooting anything like that before.  She had no idea it was CGI.