How Many Spider-People are There in Spider-Man: Into the Spider-Verse? A kaleidoscope of colours in the concrete jungle, followed by some frenetic web-slinging action, and the appearance of Spider-Man. It all seems pretty normal. Then another Spider-Man appears. And another. Hang on, just how many Spider-folk are there? In the wildly imaginative animated movie of Spider-Man: into the Spider-Verse, we might just find ourselves the best Spider-Man movie yet. The movie follows teenager Miles Morales, who finds himself bitten by a radioactive spider. And by no ordinary circumstances, he crosses paths with his counterparts from other dimensions, and they must work together to stop a threat from tearing them part, literally. In all, there are seven main spider-people in Spider-Man: Into the Spider-Verse. Let’s get to know them. We don’t really have to explain too much about this one. This Peter (voiced by Chris Pine) is the one that we are familiar with. He got bitten by a radioactive spider, got his powers, saved a bunch of people, got his girl and is on the cover of many magazines. And oh, he also has a song written about him. He lives in Miles Morales’ universe, until he was killed by the evil Kingpin. Before he dies, he entrusted Miles to finish what he had set out to do- to prevent the kingpin from opening a portal that may harm their world. Miles (Shameik Moore) is just a typical teenager, going through typical adolescent issues, and was out painting the town red (literally, he was doing graffiti), when he, too, was bitten by a radioactive spider. Then his world turned upside down when he finds himself in some pretty sticky situations. He got to see the Spider-Man in his universe before he died, and is determined to finish what Spider-Man started. This is pretty much the same as the first Peter Parker above, except that his Peter is from another dimension. And while he was also bitten by a radioactive spider, got his powers, saved a bunch of people, got his girl and is on the cover of many magazines, there is a twist. Fame and saving people got in the way of his marriage. He lost M.J, was demoralised, got fat, and now wears sweatpants instead of his spider suit. Because of a disturbance in Miles’ universe, he was transported from another dimension, into Miles’ world. With the same tingling spider sense, he finds Miles and becomes his mentor of sorts. This isn’t the Gwen Stacy (Hailee Steinfeld) that you know. In her world, Gwen, instead of Peter, got bitten by the radioactive spider, and she becomes Spider-Woman. Like Peter B above, she was transported from her universe into Miles’ one, and she followed her spider sense to Miles’ high school, and the pair hit it off, before she reveals her true self. This is no ordinary Spider-Man (Nicolas Cage), but a Peter from an alternate timeline from 1933. He’s in black and white, with a constant gust of wind billowing his long, dark (and black, of course) trench coat. This gangster fighting Spidey speaks with an accent from another era, and is much older than the rest of the gang. 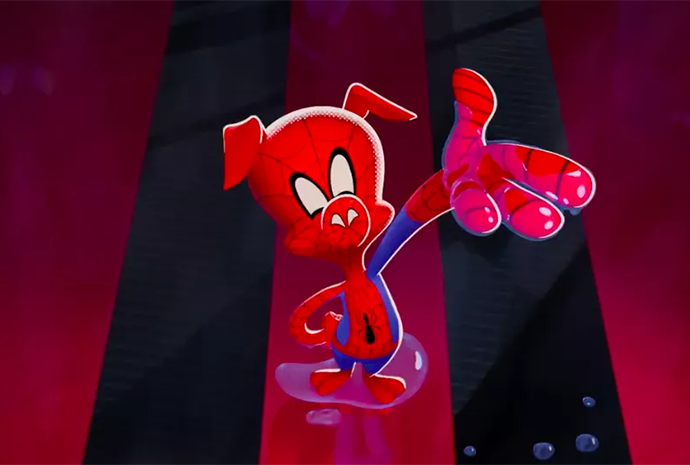 If you think Spider-Man Noir is weird, then this porktacular web-slinger must be completely out of this world. Well, he is. Spider-Ham is also from another dimension and while he resembles a swine, he is mighty agile and displays some pretty nifty web-slinging skills. He makes up for his size with a big personality. Peni Parker looks like a typical anime character, a feisty 14-year-old who, upon her father’s death in combat, takes his place. Her father was the pilot of the SP//dr mech suit, and Peni let herself be bitten by the radioactive spider to form a psychic link to the suit’s CPU, which the spider is also connected with. Together, they form a unit to fight crime. If you think each of the spider-people is weird, you are not the only one. Together, they form a motley crew that strangely works. With a villainous mob boss who’s messing with bringing dimensions together, Miles and his spider crew band together to not just save themselves, but the world as well.