Get to Know the Adult Losers Club in It: Chapter 2 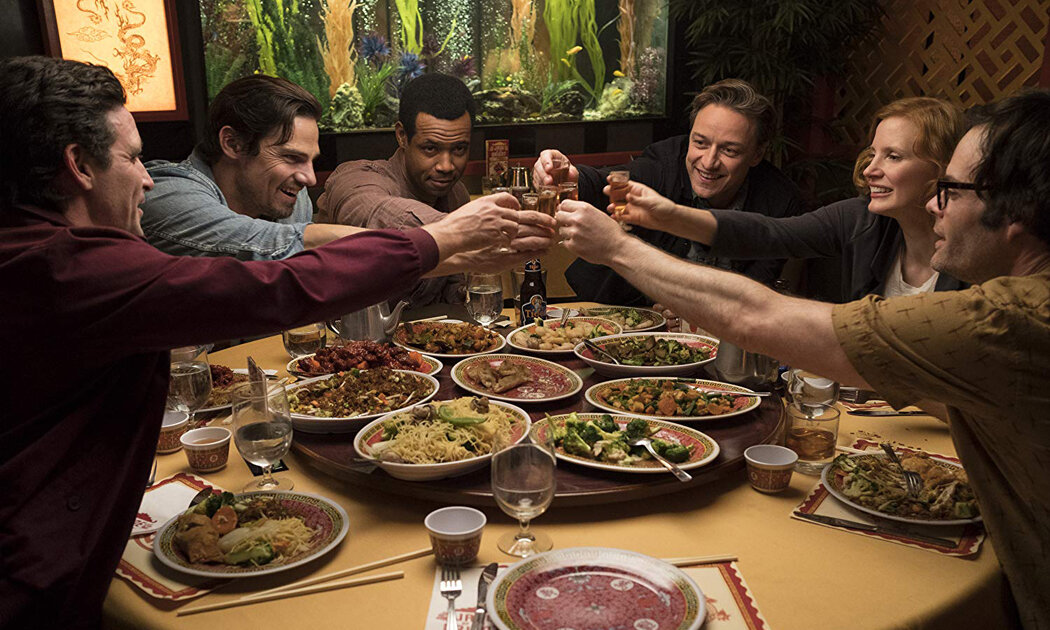 It: Chapter 2 is hitting cinemas today and will reunite the Loser’s Club- except that they are not little kids anymore but fully-grown adults in the form of Jessica Chastain, James McAvoy, Isaiah Mustafa, Jay Ryan, James Ransone, Bill Hader and Andy Bean.

The kids from the first movie will appear in Chapter 2 as flashbacks. Although readers of the book would know the storyline to Chapter 2, there is a possibility that returning director Andy Muschietti might make some tweaks to make it his own. The movie will take us to 27 years later, where the kids have all grown up and all but one moved out of Derry to make a name of themselves.

Let’s take a closer look at the adult cast and their characters in Chapter 2. 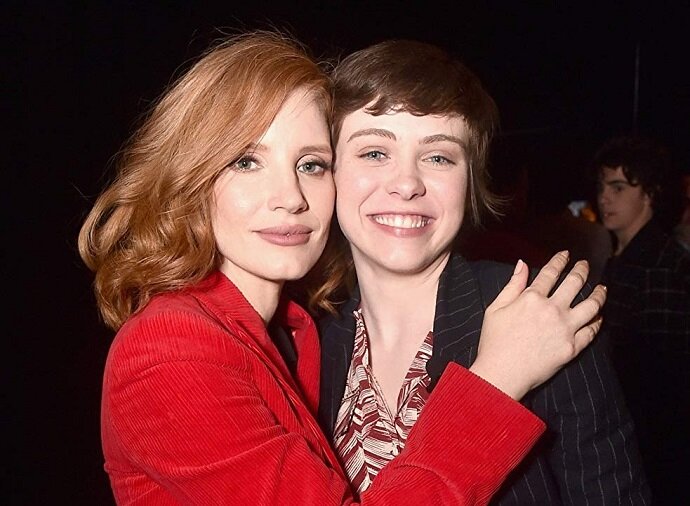 The fiery-haired Chastain and Sophia Lillis leave us with little doubt about the casting choice. They look eerily alike. Beverly is the only female member of the Loser’s Club. She’s sexually abused by her father and has to fend rumours in school that she is promiscuous. The boys in the club all have some sort of a crush on her.

As an adult, Beverly, or Bev, overcomes adversity and that encounter with Pennywise to become a successful fashion designer in Chicago. But she is haunted by her past, all her relationships are abusive, and she ends up marrying a guy who frequently beats her. Will she stand up for herself eventually?

Chastain we know, is an academy award nominated actress for her work in Zero Dark Thirty (2013) and The Help (2012), which gave Chastain her breakthrough role. She was last seen in X-Men: Dark Phoenix. 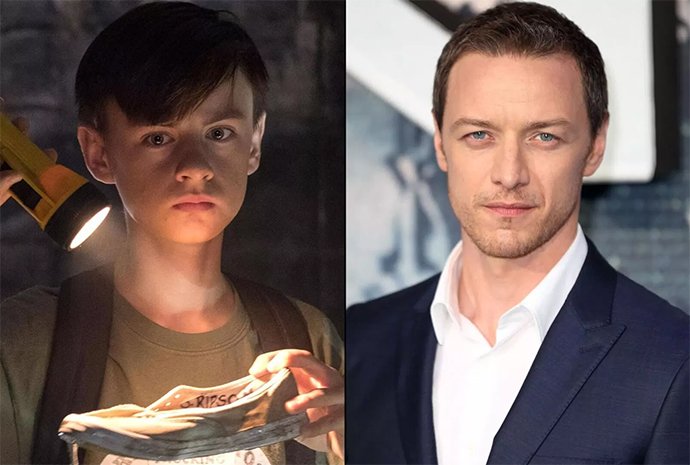 Even with a stutter, you can still tell that “Stuttering Bill” is an intelligent kid, and James McAvoy makes a good adult Bill. As the leader of the club, Bill (Jaeden Lieberher) makes it a personal crusade to battle It, and get to the bottom of the truth of his brother, Georgie’s death, which he felt responsible for.

As he grew older, Bill’s stutter began to fade, but returns with a vengeance when he came back to Derry as an adult. Bill went on to become a successful horror writer as an adult, living in London. He had the biggest crush on Beverly when he was a kid, and he married a film star that bore a striking resemblance to his flame-haired crush.

McAvoy is a long way from his days of being a faun in The Chronicles of Narnia. He’s taken on diverse roles, and is most recently known for being the young Charles Xavier from the X-Men series and shines in his role as a man with 24 personalities in Split. He was once the outsider, the coloured boy that makes an easy target for bullies, which makes Mike (Chosen Jacobs) perfect for the Loser’s Club. Orphaned in a fire and raised by his grandfather, he met the losers when they helped him during an occasion when he was bullied.

As a grown-up, Mike is the only one member of the Loser’s Club who didn’t leave Derry. He became the town librarian and spend a copious amount of time researching on Derry’s history and is the one who summons the rest of the gang back 28 years later, when the killings begin again.

Mustafa is a former NFL player and is known in the US for his appearance in the Old Spice commercials. Acting is more of a sideline for him, and It: Chapter 2 is his biggest role yet. The cherubic Ben (Jeremy Ray Taylor) is the new kid on the block and history buff. Often being made fun of for his weight, Ben doesn’t have friends prior to meeting the Losers and spends most of his time reading in the library.

As a grown-up, Ben lost all his baby fat and became an internationally famous architect. In the novel, Ben left with Beverly after they defeated It.

New Zealander Ryan made his acting debut in Australia’s long-running soap Neighbours, and stayed mainly on the small screen, in mostly Australian TV series. Like Mustafa, It: Chapter 2 is his first major movie role. 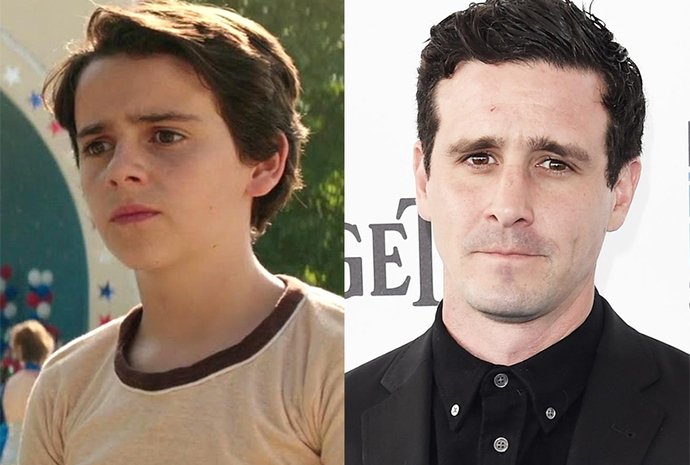 Young Eddie (Jack Dylan Grazer) is a hypochondriac, never leaving home without his inhaler, no thanks to his overbearing mother who convinced him that he’s ill and must stay close so that she can protect him. This, of course, makes him an oddball and perfect member of the Loser’s Club.

In the novel, adult Eddie runs a successful limousine business in New York, and is married to someone pretty similar to his mother. When he returns to Derry as an adult, Eddie was able to face his bully, Henry Bowers, and also stand up against It. Although it was believed that Henry Bowers died as he fell down the well in the first film, he actually survived.

Ransone is best known for his role in the HBO series The Wire, and acted bit parts in multiple movies before It: Chapter 2 comes along. 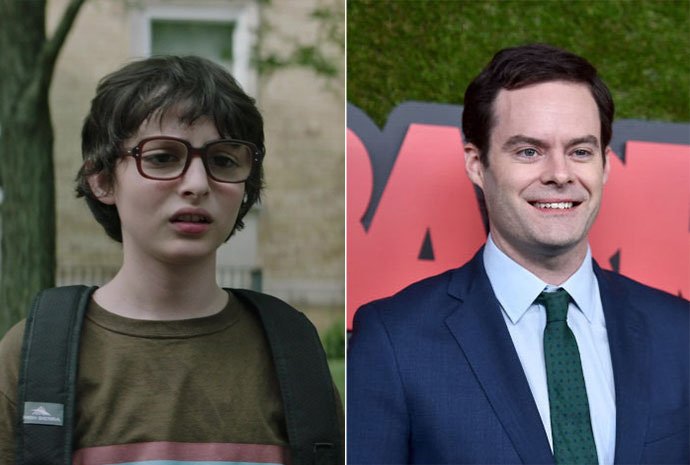 Bespectacled, wisecracking Richie (Finn Wolfhard) has a loud mouth and is the comic relief of the group. He’s always getting into trouble with jokes and impersonations and is a devoted member of the Loser’s Club.

Naturally, as an adult, Richie depends on his mouth for a living. In the novel, he’s a successful DJ in Los Angeles; in the movie, he becomes a stand-up comedian. Who knew that his once annoying habit of making annoying voices could become his main attraction?

Hader is best known for his work on Saturday Night Live, to have him play Richie is perfect. Hader can definitely bring Richie’s wisecracking ways from childhood to adulthood. A son of a rabbi who isn’t interested in religion, Skeptic Stan (Wyatt Oleff) is all about being logical and not emotional. He was he last member of the Club to accept that It exists.

Stan grew up to be a thriving accountant in a large accounting firm based in Atlanta, and was even made partner. He’s married to a teacher and everything seems perfect until he gets a call from Mike about the killings. Instead of returning to Derry like the rest, Stan chose to take his own life. It was inferred that out of all the kids of the Loser’s Club, Stan had the most vivid recollection of their encounter with It, and would rather die than to face It again.

Bean is definitely a new name, having only started acting since 2014. His serious, studious face perfectly resembles an adult Stan.